The Southern Cowboys were able to preserve their unbeaten record with a close win over the Steelers in the GNYFF’s Metgot Division. 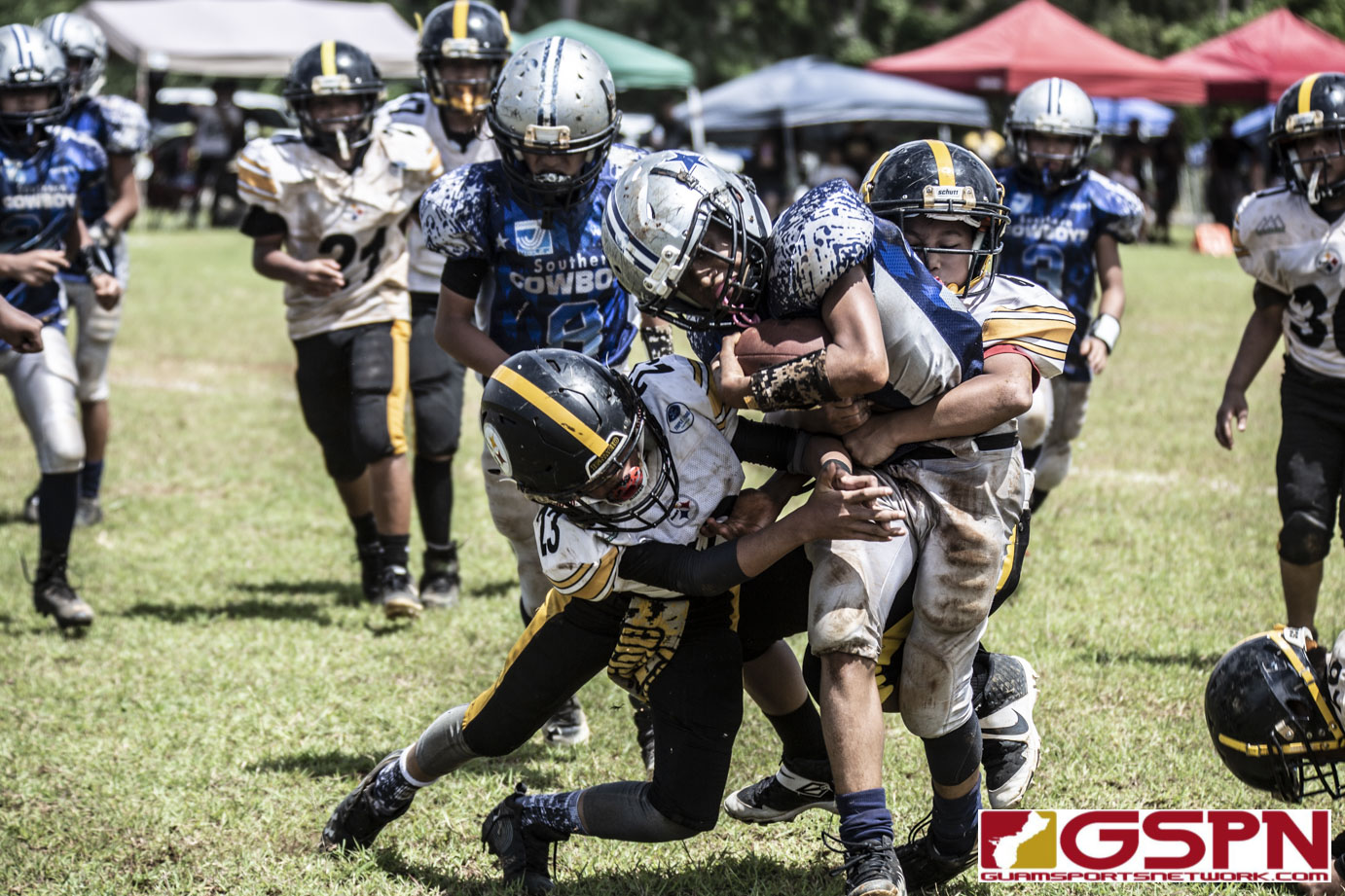 The Metgot Southern Cowboys had their backs against the wall Sunday afternoon against a Tamuning Steelers squad determined to do away with their perfect record. The Cowboys were able to overcome their two red zone turnovers to get the win 8-7 on a late 4th quarter touchdown from Jaron Meno.

Meno’s score was set up by a 25-yard punt return from Bobby Taisipic, who brought the offense to the five-yard line. The Cowboys ran their offense strictly from the ‘I-formation’ and Meno was able to find just enough running room on 3rd down for the five-yard score to take the lead 8-7.

The Cowboys missed the PAT kick that would have given them a field goal advantage, leaving the door open for the Steelers.

On the following possession, the Cowboys defense came away with a big takeaway after the Steelers fumbled the ball away on a lateral pass near midfield with Southern running down the final minute of the game.

“Coach was telling us to never give up and to always keep our heads up,” said Meno on the turnaround.

The punt return by Taisipic set the whole touchdown drive up and the return man was calling for a sub right after his big return. His coaches wouldn’t give him the break with Taisipic playing lead blocker in the ‘I-formation’ and his play would help Meno get into the end zone.

The Cowboys were on the wrong end of turnovers in the red zone with Meno coughing up what would have been a 50-yard score in the 2nd quarter. Steeler Jason Suda made a touchdown saving tackle and popped the ball loose in the process which the Steelers would recover.

The other turnover came in the 4th from four yards away from the end zone. A bobbled handoff slipped out of Meno’s hands with the Cowboys turning the ball over trailing 7-2.

“I really wanted to make up for those fumbles,” said Meno.

The Cowboys were able to remedy the first fumble after forcing the Steelers into a safety to take a 2-0 lead.

The Steelers were able to recover the kick on the safety kick-off which they would turn into the games first touchdown. Suda would get past the secondary and quarterback Trey Blas would find the streaking receiver for a 37-yard score. A successful PAT would put the Steelers up 7-2 at the half.

Neither team was able to get much traction in the 3rd before going into the wild 4th quarter.

The Steelers aimed to run down the clock after recovering the ball on the Cowboys second red zone turnover. After hitting the four-minute warning, the home team ran three straight run plays to get within 4th-and-one at the 20-yard line. They lined up to go for it, but a false start on the play would force them to punt.

Taisipic would make the big play on the short punt to set up the win, preserving the Cowboys unbeaten record to a now (5-0) while the Steelers fall to (2-2-1).