Southern celebrated their final home game of the season with a win over the Tiyan Titans. 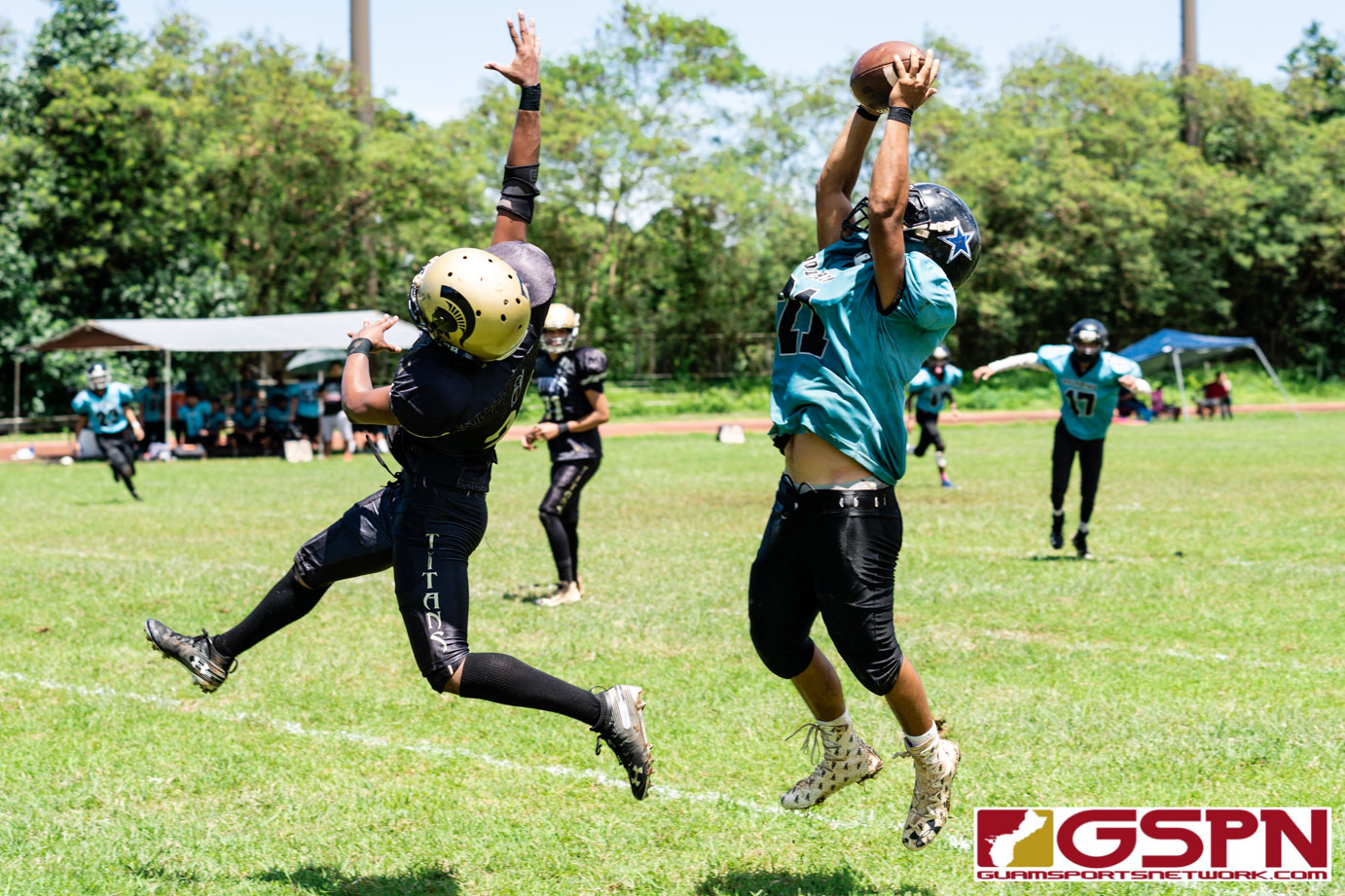 The wild finish down South ended in extra celebration for the Southern Dolphins on homecoming day as they picked up their first official win of the IIAAG Football season by defeating the Tiyan Titans 20-16 Saturday afternoon. The win snaps the three game slide for the Dolphins (1-3) while the Titans fall to (1-3).

Southern appeared to have put the game out of reach midway through the 4th quarter as running back Tanner Calvo pounded in a four-yard touchdown to put the Dolphins up 20-8.

The Titans responded quickly through the air after quarterback Kaekoa Leon Guerrero hit receiver Davin Mojica for a 35-yard gain on the ensuing drive. Leon Guerrero completed the drive with a 10-yard touchdown pass to Darren Cruz, followed by a successful 2-point pass to Mojica to get within 20-16.

Tiyan knew exactly what they wanted to do on the ensuing kick-off, going left up the sideline while sending the kill-man Jaythin Manglona to retrieve the ball. Manglona delivered with a hit on return man Isaac Jesus to pop the ball loose and teammate Alavias Quichocho would recover the ball at the Southern 25-yard line for the Titans.

Leon Guerrero scrambled free for a short gain up the left sideline before getting dragged out of bounds, but his day would end on that play after suffering a leg injury with a little over a minute to play. The team turned to Cruz after the injury timeout as their backup QB.

Cruz would get a short completion out of bounds on his firs throw, but the Dolphins knew exactly where the ball was going on 2nd and goal. Linebacker Thomas Benavente dropped back in coverage and picked off the throw down the middle, returning the pick to midfield to seal the Southern win.

“We were playing 4-3 and I saw the slot guy running out and the other receiver coming in so I just read the quarterback’s eyes and picked it off,” said Benavente on the first interception of his career. “We wanted this win pretty bad because we wanted to let the league know we’re still in the game.”

The interception was the fourth take-away for the Dolphins defense with Jesus picking off Leon Guerrero twice. The secondary knew Tiyan was going to air the ball out which would present a lot of opportunities to make a play.

Southern benefitted from some home cooking early in the 1st after using a series of runs to break in the games first score. Two first down gains from Jesus would get the Dolphins in the red zone and Escuadra would get the job done on a bootleg touchdown from five yards out. A successful 2-point conversion run from Conan Baza put the Dolphins up 8-0 to start.

Tiyan’s first drive ended in a bad snap fumble on 3rd-and-long as Southern turned the takeaway into a 16-yard throw and catch from Escuadra to a wide-open Baza up the middle for a 14-0 lead.

The Titans responded in the second quarter as Leon Guerrero hit his leaping receiver Deshawn Warren, who made a great catch over the Dolphin secondary, while capping off the play with a 50-yard run up the sideline for Tiyan’s first score on the day. A successful 2-point conversion had the Titans within striking distance down 14-8.

The 3rd quarter moved rather quickly as both teams were only able to produce a single offensive series before moving into the frantic 4th.

Southern’s hot start was quitted down after the Titan’s made defensive adjustments, making it harder for the Dolphins to move the ball in the second half.

“They stacked their line, sent more blitzers and pressured me a lot. But we eventually adapted to their defense and we did well on offense,” said Escuadra.

And the homecoming win couldn’t have come at a better time for Southern as they prepare to move on to the second half of the season.

“This was a very important win. It really helps pick up the morale and energy for the rest of the games coming up. It was a hard fight today and they showed us that we can win these type of games,” said Escuadra.

The Titans will aim to rebound against the GW Geckos next weekend while the Dolphins will face the unbeaten FD Friars.