The opening round of the IIAAG playoffs had the higher seeds moving. The Geckos defeated the Dolphins and the Sharks escaped a close one against the Islanders. 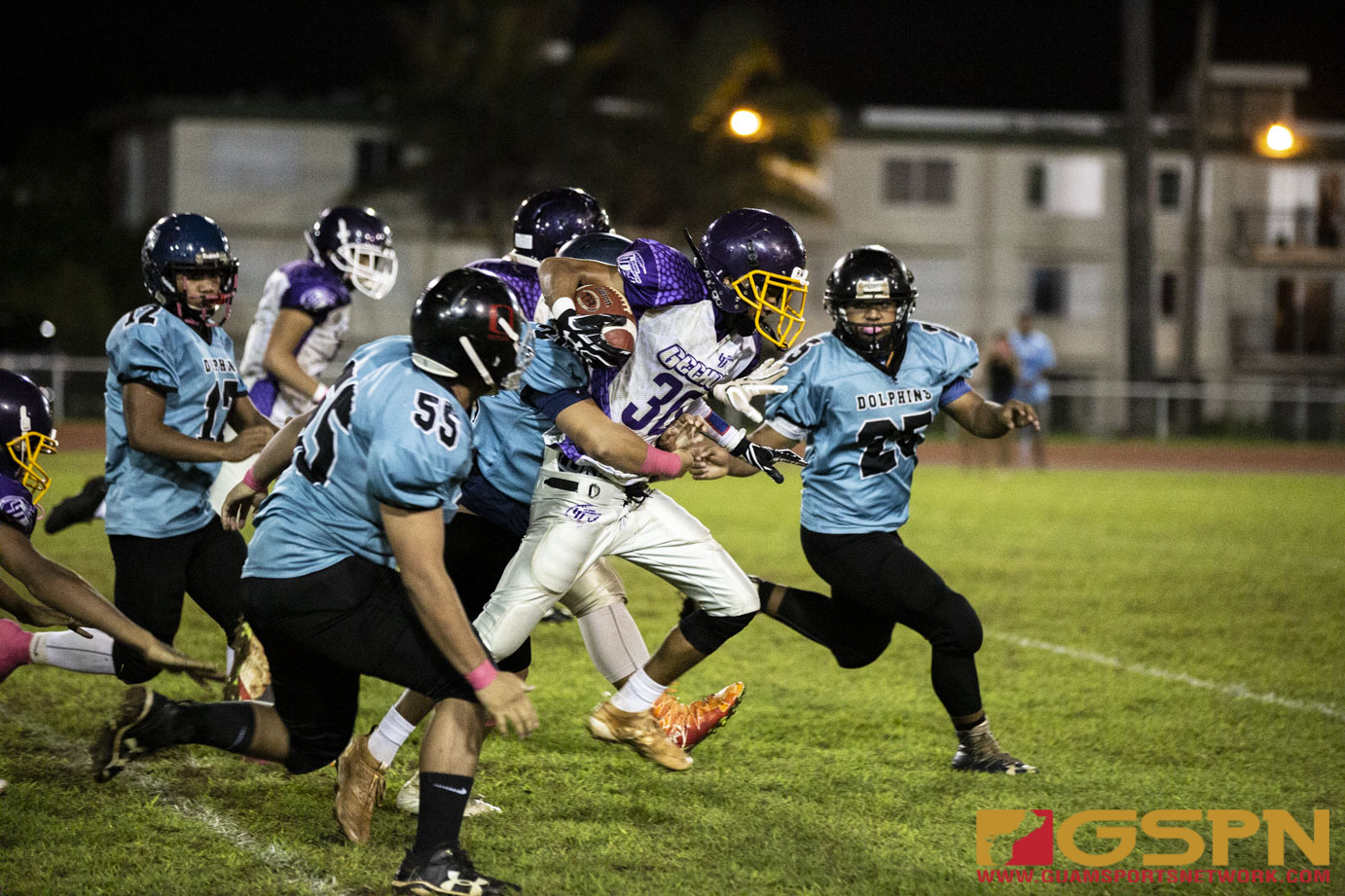 The GW Geckos advanced to the semi-finals of the IIAAG Football League after defeating the Southern High Dolphins 27-6 Friday evening. The offense for GW established momentum early and the defense held off any late charge by the Dolphins to secure the victory.

The Geckos started the game out strong with running back DJ Jamanila using his blockers and breaking free to find the end zone from 33-yards out to go up 7-0.

“It felt good for our offense to go out and get that momentum in the beginning of the game,” said Jamanila. “This is still a young offensive team and we are still figuring things out. It felt to go out there overall to get an lead.”

The Dolphins answered on the ensuing play with Cerilo Reyes returning the kickoff 40 yards. Four plays later, the Dolphins elected to go for it on a 4th-and-short situation but Gecko linebacker Jonahs Gumabon was waiting for the tackle for loss.

The Geckos took advantage of the turnover and continued to move the chains with a good mix of run and pass plays to set up a score from three-yards out by Mykai Blas run. The Blas run made the score 14-0 after a successful PAT Quarterback/Kicker Ricky Macias.

William Rios got his lone sack of the game in the second quarter which was a 14-yard loss for the Dolphins. The Dolphins were later forced to punt but the quickness of the Gecko defense tackled the Southern kicker on their own one yard line which set up a QB sneak score by GW’s Macias. The Macias run had the halftime score at 20-0.

Southern comes out fired up

A good motivational halftime speech does magic to a team on the edge of elimination. The Dolphins came out on fire and capped a 72-yard opening drive with a goal line score by Southern running back Conan Baza.

The Dolphins managed to force a turnover on the ensuing kickoff with Lawrence Aflague providing the hit that forced the fumble which was quickly recovered by teammate Troy Muna on the Gecko 35-yard line.

IIAAG defensive MVP Noah Quichocho had a pair of tackles to force a fourth-and-long situation as the Dolphins decide to go for it deep in Gecko territory . The Dolphins were unable to move the chains with Joshua Dela Cruz and Devin Benavente making the stop for the Geckos.

The GW offense was also unable to advance the ball after Southern’s turnover.  Thomas Benavente from the Dolphins batted down a pair of passes from Macias which forced another 4th-and-10 situation. The Geckos were forced to punt to start the fourth quarter and got a huge play from Gumabon once again.  Gumabon forced a fumble with a strip tackle on Dolphin returner which was recovered by Mana Indalecio.

The Dolphins were building momentum up to the point of the fumble forced by GW’s Gumabon.

“There really was nothing special or planned during the play, i just wanted to go out there and do my job,” said Gumabon who also had five tackles. “Its the playoffs so its ‘go big or go home’ and do your best,” Gumabon added.

The Geckos added an insurance touchdown with cornerback Jonah Garcia making a huge play on offense with a 33-yard touchdown reception to close the game out with a score of 27-6.

Jamanila lead the offense on the ground with 92 yards on 11 carries. Gabriel Gilbert had five receptions for 58 yards and Macias had seven completions for 102 passing yards.

“We are still going up, work hard in practice for whoever we play against whether it will be Tiyan or Guam High.  We want to get to the Championship game so by that time we should be close to perfect,” said Jamanila.

Baza provided all of the offense for the Dolphins with 105 total yards. Baza rushed 13 times for 88 yards and had three receptions for 17 yards for Southern. Aflague led the Dolphin defense with five tackles, Isiah Castro recorded four tackles for Southern.

The Gecko defense was led by Quichocho who recorded a game high eight tackles. Rios had three tackles, all behind the line of scrimmage, and a sack.

The Geckos await the winner of the Tiyan Titans vs Guam High Panthers quarterfinals game which will be played tonight. The winner will play on Saturday at GW.

The JFK Islanders walked into their showdown against the Sanchez Sharks with no memory of their one-sided regular season meeting which Sanchez had won. Instead, they played with a certain level of desperation and nearly walked out of the Okkodo field with the first upset of the post season.

Sanchez dug deep and relied on their running attack with Jayton Penaflor scoring on a goal-line quarterback keeper late in the 4th quarter to give Sanchez their first lead of the game 18-16.

JFK opened up the game with an arial attack that set up their first score, a short run by Jacobe Quinata for a quick lead. The Sharks would respond on a ground attack of their own, but a fumble deep inside their own territory would eventually turn into six points for the Islanders. A long field goal from Juan Sarmiento had the Islanders up 16-6, the largest lead of the game.

Sanchez would lean back on their running attack, posting two touchdowns in the second half. After a JFK punt with under four minutes left, the Sharks would run down the rest of the clock, converting on a 4th-and-short and 3rd and short with JFK forced to burn all their timeouts.