The Island Stunnerz flaunted their potent offense in a 26-16 victory in their Week 3 matchup against the Sindalu Raiders at the UOG football field. Dani Vaughn led the Stunnerz with her three breakaway rushing touchdowns and 183 rushing yards. 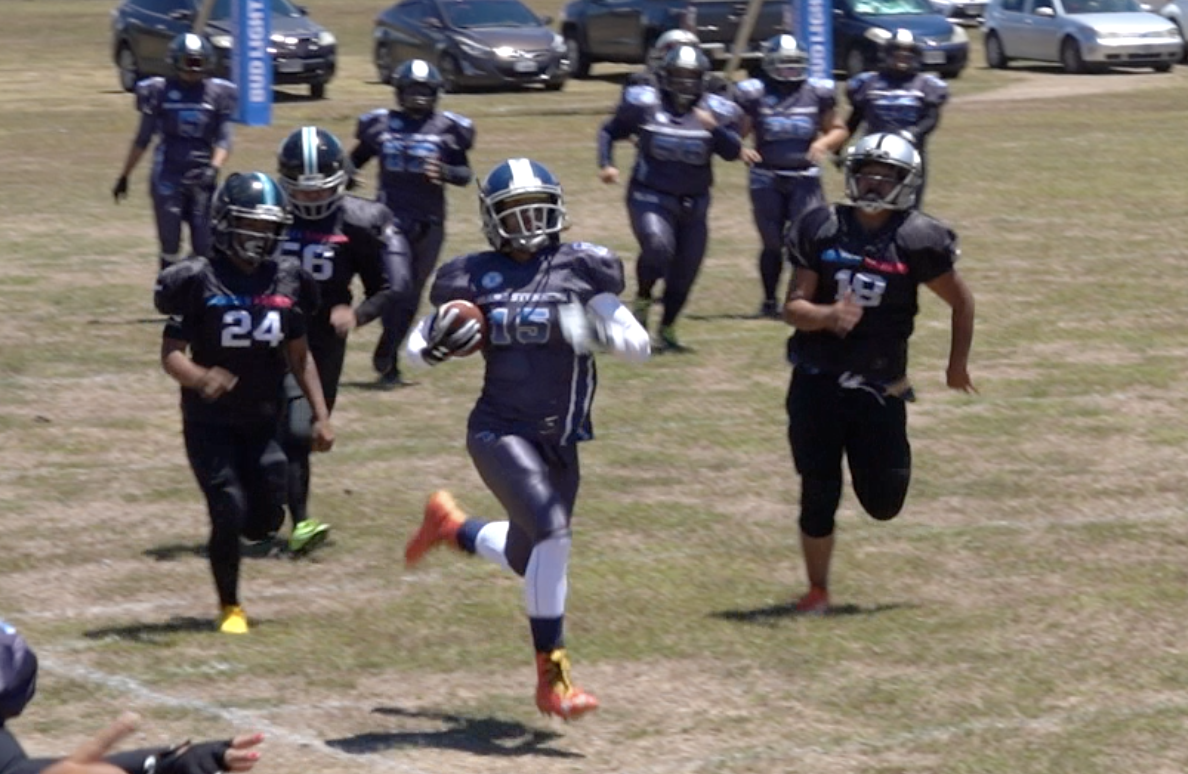 The Island Stunnerz flaunted their potent offense in a 26-16 victory in their Week 3 matchup against the Sindalu Raiders at the UOG football field. Dani Vaughn led the Stunnerz with her three breakaway rushing touchdowns and 183 rushing yards.

“I always take advantage of my blocks. My offensive line is amazing, and they make my job that much easier, so everything I do I give all the credit to them.” Vaughn said.

The Stunnerz also had strong performances on the other side of the ball from Josita Harris and Angeline Taito. The Stunnerz defense limited the Raiders offense to short gains and kept them from scoring in the first half.

“We just need to clean up all of our plays. We have a lot of injuries, so it’s just a matter of new people coming in and getting them rolling on what we need to accomplish. [The season] is going great. We have a lot of new players, so it’s a learning experience for a lot of us, but we’re doing great,” commented Vaughn on the season.

The Stunnerz defense started strong by preventing the Sindalu-Raiders from moving the chains and forcing a turnover on downs. The offense returned the favor by moving the ball up to put Dani Vaughn in position to grab her first touchdown with a reverse run that went for 40 yards making the score 6-0 after the Stunnerz first drive.

The Sindalu-Raiders came back in their next drive looking to make up for their first possession. The Sindalu Raiders turned to Tiana Perez and Leticia Blas to march their offense down the field. The two backs had the Stunnerz defense on their heels, but a fumble stopped the Raiders attack at the 12 yard line and prevented them from scoring.

The Stunnerz rode the momentum of the turnover by handing the ball off to Vaughn and letting her breakaway for an 88-yard touchdown, making the score 12-0 after the Stunnerz first two possessions.

After halftime, the Sindalu-Raiders came alive as their defense was able to force a fumble. The Raiders offense capitalized off the turnover as Tiana Perez fought her way through two tackles on her way to a 60-yard touchdown. The Raiders completed their two point conversion attempt and closed the deficit to 12-8.

The Stunnerz composure faltered for a momentum after the two teams exchanged some words after the kickoff, but they regained their control over the game after Dani Vaughn went off for a 53-yard touchdown, her third of the game.

The Stunnerz went off for one more score in the fourth quarter as quarterback, Lani Jackson, connected with her receiver, Melanie Manglona for a 45 yard passing touchdown. The Sindalu-Raiders got in one last shot as the clock ran down off a 62 yard passing from Chelsie Gofigan to Tiana Perez, but it wasn’t enough as the game ended 26-16.