For the fourth year in a row, the ND Royals are soccer champions of the IIAAG after defeating the Academy Cougars 3-2 at the GFA Training Facility in Harmon Saturday evening. 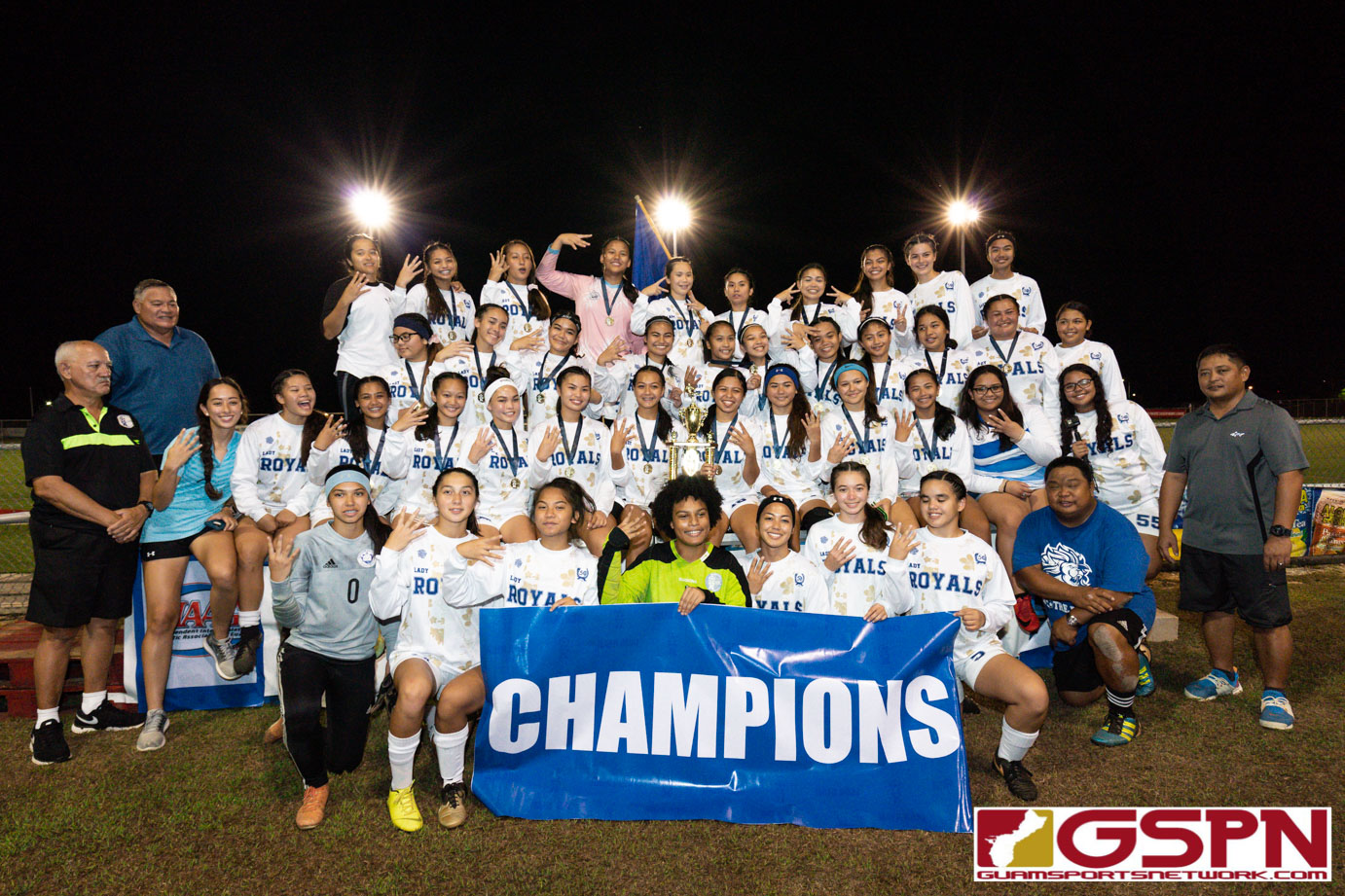 The ND Royals Soccer Dynasty rolls on yet another year.

For the fourth year in a row, the ND Royals are soccer champions of the IIAAG after defeating the Academy Cougars 3-2 at the GFA Training Facility in Harmon Saturday evening.

ND Royals Brianne Leon Guerrero was named MVP of the Season, First Team All-Island Forward, and MVP of the match after helping the ND Royals win the IIAAG Girls High School Soccer Title for a fourth year in a row. (Photo by Michael Blas)

Royal Brianne Leon Guerrero scored two of the teams goals with one coming from star sophomore Lauren Phillips. The Cougars got both their goals from Mia San Nicolas, including a late goal in the 86th minute to put some last minute pressure on the defending champs.

Saturday proved to be an exhausting day for ND’s seniors on the team with their graduation also happening on the same day. That was the case for the back-to-back MVP Brianne Leon Guerrero, who cashed in a two-goal performance in her final high school game, but even she admitted the day was hectic.

“My focus was everywhere, but I knew that right after graduation happened that I had to focus on the game and bring it home,” said Brianne.

That didn’t slow down Leon Guerrero, who walked away with four different pieces of hardware being the MVP, Player of the Match, 1st Team All-Island selection and the IIAAG Championship Trophy.

The Royals came out aggressive, but couldn’t get any of their 11 shots at goal to go in the first 20 minutes of play. Then they found themselves down 1-0 with Cougar superstar Mia San Nicolas netting the first goal at the 20th minute. But that advantage didn’t last long as Leon Guerrero pushed aggressively to get open, creating a break away at the 22nd minute to net the equalizer for a 1-1 game.

“I wanted to score really fast to prove to my team that nothing was over and that we could get it right back,” said Bri on momentarily trailing.

San Nicolas almost scored her second goal late in the first half on a heavy shot from 15 yards out, but a jumping punch-out by ND’s Elle Balajadia would deny the goal as the shot sailed over the post thanks to the highlight play. Balajadia’s save and a handful of saves from Cougar Phoebe Shmull kept the score tied at the half.

The Royals knew what needed to get done in the second half.

“We told each other that we needed to tweak a little things, like trap more on defense and our offense needed to finish plays,” said Brianne.

At the 54th minute, Midfielder Shyann Roberto placed a perfect ball to the left wing where Phillips would get a clean look. Lauren wasted no time, using one dribble to get a strong shot on the ball as it sailed in for a go-ahead goal.

“We all knew being patient was the most important thing. We needed to work the ball around more to get the best shot available and we did more of that in the second half,” said Lauren Phillips.

ND added to their lead minutes later as Leon Guerrero once again got free for a break away, using a fake to dodge the diving Cougar keeper Shmull for a wide-open shot to put ND up 3-1.

Momentum from the Cougars had died down with star defender Minami Rabago shutting down every attempt that came near the box. The Royals decided to dip into their bench to finish the game with mass substitutions in the final five minutes. San Nicolas took advantage of the subs as she added a touch of drama in the 86th minute, netting a goal after the Royals defense failed to clear possession.

The starters immediately came back in with ND able to hold-off the late surge from the Cougars.

Going 4-of-4 in soccer title games, it sure does seem that everything Brianne Leon Guerrero touches turns to gold. From a freshman finding her footing to the leagues most complete player, Bri has come a long way.

“I didn’t think that coming in as a freshman that I would end my career on a four-peat, but that’s what happened and it feels great,” said Leon Guerrero.

Assistant coach Demi Brennan was a player on the team when the current Royal Dynasty started. She’s since been able to help usher in more titles for the team and she admitted coaching in a four-peat leaves a different kind of an accomplished feeling.

“Nothing feels better than carrying on the ‘peat,” said Brennan.

And from teammate to coach, Brennan was in an interesting position, but the girls ultimately responded well to Coach Demi instead of teammate Demi.

“At times I did struggle with authority, but I had an advantage having played with them so I know their skills and what they’re capable of doing,” added Demi.

A bulk of the ND roster are sophomores and juniors, including Phillips, Roberto and Rabago, who were all key components to this teams success. With four titles down, the future of ND soccer is still looking bright.

“We’ve got to be the leaders now and help lead the younger team in the right direction,” said Lauren on the teams outlook. “We have to send positive vibes and keep up the positivity.”

STUNNERZ DOWN SINDALU-RAIDERS
BIRTHDAY BOY CAMACHO ITCHING TO GET BACK INTO THE OCTAGON
Loading Comments...