ALL-TIME BEST SCHOOLS AT RUNNING BACK

How does your school rank amongst the all-time great running backs? 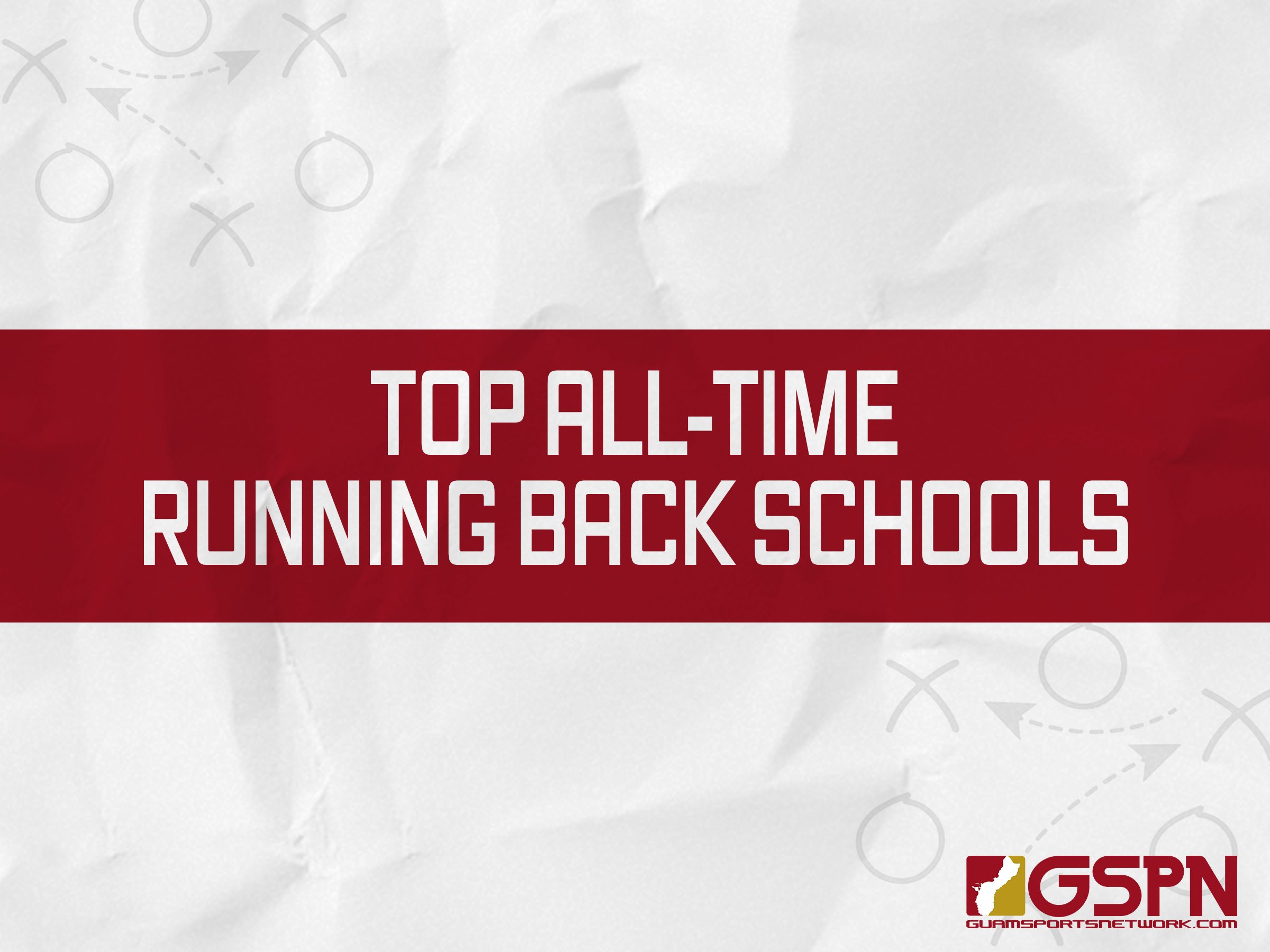 Coming down to the top three running backs from each school has been tough, yet extremely fun. Guam’s gridiron has been founded on the ground game and to this day, our island churns out countless amounts of athletic running backs. Heck, the Sanchez Sharks still run the wishbone offense.

Like the quarterbacks list, I draw from four decades of action that is still talked about today.

It was a fight for the top slot, but no other team could overcome the sports entertainment provided by Kenny Lujan, Rob Rodgers and Erwin Flauta.

Lujan had the total package of speed, strength, agility and intelligence with no weakness in his game, becoming arguably the greatest running back Guam has ever produced. He even blocked better than most linemen. Rodgers was the blonde haired, blue eyed boy from Agat that came up from the small schools division and proved his worth by breaking the rushing record at that time and almost mimicked everything his mentor Lujan once did in the Green and Gold. (Note: Rodgers, to this day, calls Lujan his ‘all-time’ hero).

Flauta wraps up the trio. Everything was effortless for Flauta, who never left the field and was a true ironman. His fluid game was a thing of beauty, leaving defenders grabbing at air. Put the ball in Flauta’s hands (even on punt and kick returns) and he became a human highlight reel.

This was the toughest school to cut down to three as the Friars present a plethora of exceptional running backs over the years.

Bruce Meno will forever be on FD’s football mantel as both a player and a coach. As an undersized runner in the mid 90’s, Meno seemed to be bathed in oil because he was so slippery, no one could tackle him. He was the Emmitt Smith of Guam who loved to run between the tackles. DeAundre Cruz was a manchild, he probably had ba’bas (facial hair) since second grade. Cruz was just a man amongst boys. His FD teams blew out everyone that Cruz barely played beyond the third quarter. Imagine if he was able to carry 20+ times per game – things would’ve been out of control. And for the youngest player on the list, you have Kein Artero. Another player worth the price of admission who could find the end zone on any given touch. His speed and stride left a blur, giving him the nickname ‘Ghost’ by GSPN.

Three Ga’Ga’s (Monsters) is how I describe the Geckos final three. Paul ‘Commando’ Camacho ran with reckless abandon in the mid 80’s, famously known for flying over the line of scrimmage. Jesse Lujan was a GYFL superstar with the Guam Eagles and took those talents to GW for just a year. Longtime coach Loring Cruz said if Lujan played all four years, he could’ve been GW’s best running back ever. His bruising game and breakaway speed left lasting impressions even if it was for but a year. Hosea Ware was a bruiser himself decades later, epitomizing the blueprint of a Gecko running back.

Speaking of plethora of runners to choose from, there were too many to pick from the Sharks. Remember, before Guam High School was formed, most of the Air Force kids went to Sanchez.

Let’s start with Blu Shiroma. I think he enjoyed inflicting pain on the defense more than gaining yards (j/k Blu). Corey Dunlop and Dondre Barnes had similar styles in the vaunted Sanchez wishbone attack. Funny thing is, you knew what was coming…you just couldn’t stop it back then.

For a brief history when the Tradesmen had their own high school team, they rolled out some talent. Kenny DeSoto was super skinny but super fast. John Ulloa was multi-talented and Mike Palacios had the same skill sets and path as GW’s Jesse Lujan.

Rob Rodgers is the only player on two teams on this list. He was part of the original Agat/Santa Rita High School (later Oceanview High School) and his legacy remains untouched at the southern school. Shaun Pascua and Wayne Matanane were workhorses when the Knights converted over to the Dolphins.

Panther D.J. Cruz had a dash of Bruce Meno in him while Tegan Brown was a bruiser. Jesse Karl Cruz and Joseph De Leon Guerrero spearhead the way forward for future Bulldogs and Titans.