MMA made it’s return to Guam after a long hiatus in the form of BRAWL. 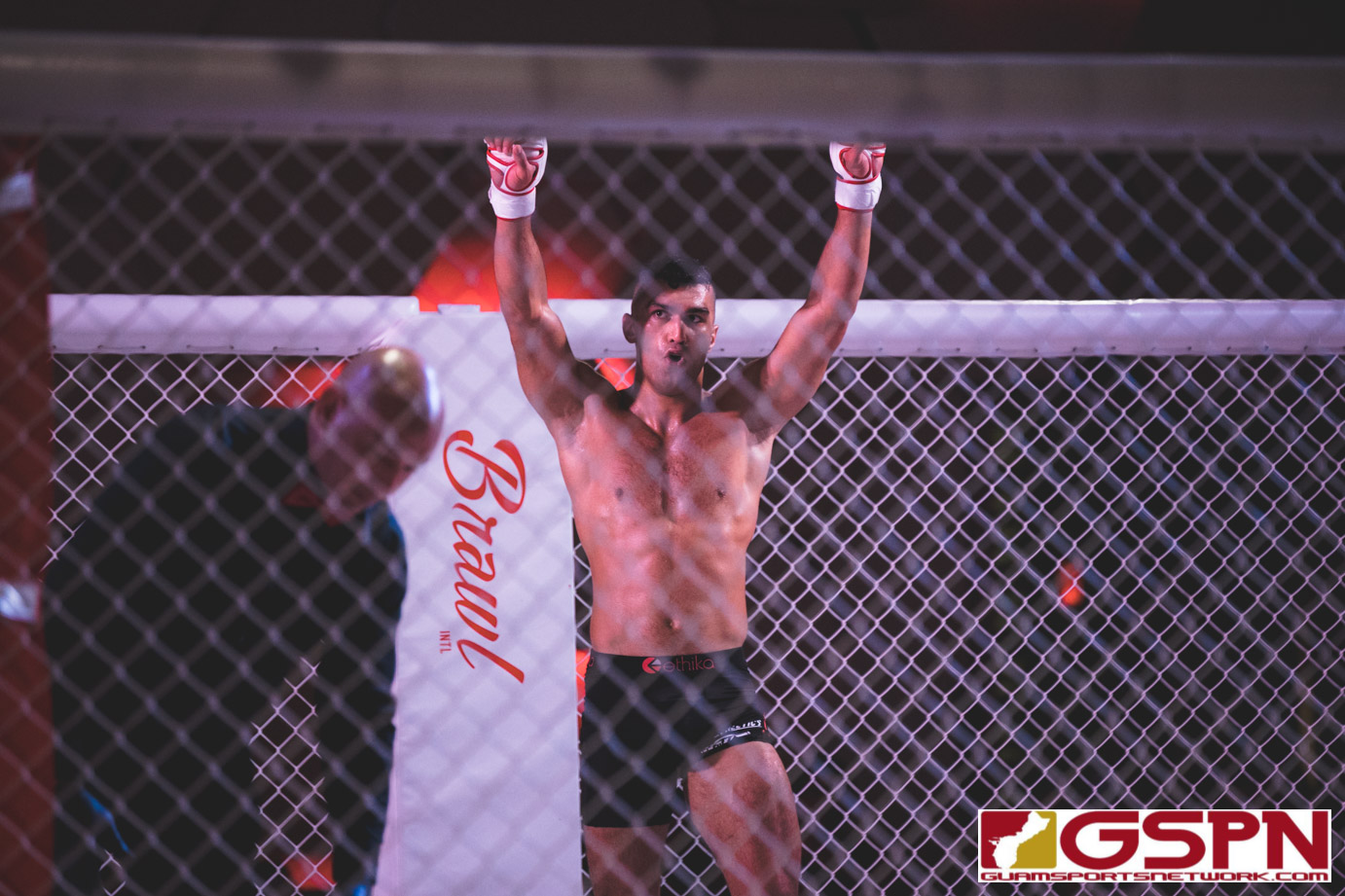 The mixed martial arts form made its return to the island of Guam with BRAWL and did not disappoint the packed venue at Dusit Thani. The elegant venue, along with each fan dressed in style, made for a classy show that lived up to its name – “The Champagne of MMA.” Both local and international fighters put on exciting performances for the eager crowd and gave the fans what they wanted to see – a BRAWL.

Owner of BRAWL, and Pioneer of the sport of MMA, Melchor Manibusan, was able to use his connections with promoters in the Japanese MMA Promotion – Deep International to secure a deal where both athletes in the fight of the night would receive a contract with Deep International.

Deep is a major steppingstone to make it to the next level of fighting and is one of the platforms that helped local Rizin Champion Roque Martinez build his MMA career.

Fighting in front of a home crowd, out of Guam Muay Thai, Austin Petros made his Pro MMA debut and showed lots of promise against Korean opponent Kyung Taek Hong. Both fighters displayed exciting striking ability, but neither fighter would be finished which would result in a draw. Nonetheless, their performance would earn them both a contract with Deep International.

“It means a lot to be able to get this contract, dreams come true. I’ve been training hard for the past year and a half but haven’t been able to compete because of injuries and weather conditions. And tonight, it was awesome to compete, especially in front of Guam fans.”

Fighting out of SPIKE22, Joey Crisostomo drew lots of applause from the hometown crowd in the main event. A majority of the fights on the card had been straight slugfests, but in the main event, the technicality and precision of MMA was on full display.

Crisostomo showed good wrestling technique, avoiding a takedown early on. The striking had been evenly matched until Crisostomo got rocked by Bang when they were trading blows against the cage. The fight went to the ground and Bang got Crisostomo’s back to force a tap out via rear naked choke.

Fighting out of STEEL ATHLETICS, Akmal Khozhiev picked up a win against Guam Muay Thai’s Jose Ramirez. This was a fight that drew some hype in the moments leading up to the event. In a pre-fight interview, Khozhiev told his opponent he would knock him out in the first round.

Although he was unable to do that, Khozhiev put on quite the show, mixing up his striking techniques and landing smooth spinning back kicks on several occasions. In the second round, Khozhiev got Ramirez to the ground and began his onslaught of ground and pound. Brutal punches and elbows after obtaining full mount would force the referee to call a TKO.

Seay Camacho (SPIKE22) made his return to MMA after two years, and he looked very sharp. It didn’t take long for Camacho to grab a victory over his opponent Masato Nakamura. In the first few minutes of the fight, a beautifully executed suplex by Camacho would cause Nakamura to tap out. Fans were confused at first glance, but when the cameraman zoomed in on the arm of Nakamura, it was apparent to see why.  It seemed as though Nakamura posted his arm out when Camacho took him down, and the result was a gruesome dislocation of the arm.

Camacho shared some of his thoughts following the fight:

“I’m at a loss for words. It’s so good to be back. It’s been two years since I’ve fought, but this is only the beginning. I’d like to give a huge shout out to my par Kyle Aguon for never giving up on me and for continually pushing me to get back in the gym.”

The genius of the unique rules of the BRAWL Fight Promotion forces each fighter to leave it all on the line. With two rounds, the first being 10 minutes, and the second being five, you must finish your opponent to get your hand raised after the fight. Points are irrelevant, which means that even if a fighter dominates the other fighter and the final bell rings, the match still ends in a draw.

The purpose of those rules is to put on a show. Manibusan elaborated that these rules make BRAWL a unique promotion and makes every fight an exciting one to watch because no one is playing the point game.

While a goal of BRAWL was to bring the sport back to the island of Guam, and to give local fighters an opportunity to fight in front of a home crowd without having to travel elsewhere, it was also an opportunity to scope out the next generation of talent in the sport.

Manibusan always thinks ahead, and while he’s built a generation of MMA athletes on Guam, he knows that for many of the fighters representing our island, time is creeping up on their careers.

Young athletes in Austin Petros and Brian Ramiro showed much promise in their professional MMA debuts, and gained the approval of Manibusan.

One of the most anticipated fights coming into the event was the MMA debut of Custom Fitness / SPIKE22’s Brian Ramiro. Ramiro’s striking ability in the ring against the seasoned veteran in STEEL ATHLETICS Arian Scherer, made it seem as if Ramiro had been doing the sport for years. Ramiro was the aggressor early on and opened up multiple cuts on the face of Scherer, but Scherer’s tremendous heart in the ring forced Ramiro to be cautious all night.

Ramiro landed combo after combo, but Scherer kept returning each combo with a strike of his own and even rocked Ramiro with a spinning back fist on one occasion.

Although the fight ended in a draw, this first match set the tone for how the rest of the night would go, and fans were in for a treat all night.

Promoter Manibusan gave his thoughts on the debut:

“Brian Ramiro opened up a lot of eyes tonight. He woke up a lot of people and even the Deep guys really liked him because of the fact that this was his first fight and he was 0-0. He faced a much more experienced fighter, and he put on a show.”

Manibusan was in great spirits following a successful event. He was proud of all the fights and thought there was a good turnout. After witnessing the event, fans will be eager to see the next one, and Manibusan is already looking toward the future,

“I’m gonna talk to my team. We may be looking at July. Usually in July, all around the world there is international fight week, and we might do a fight expo here around that time.”