FRIARS CLINCH TOP SEED OF IIAAG IN WIN OVER WARRIORS

The FD Friars locked up top seed in the IIAAG Boys Basketball League in another heated rematch against the St. Paul Warriors. 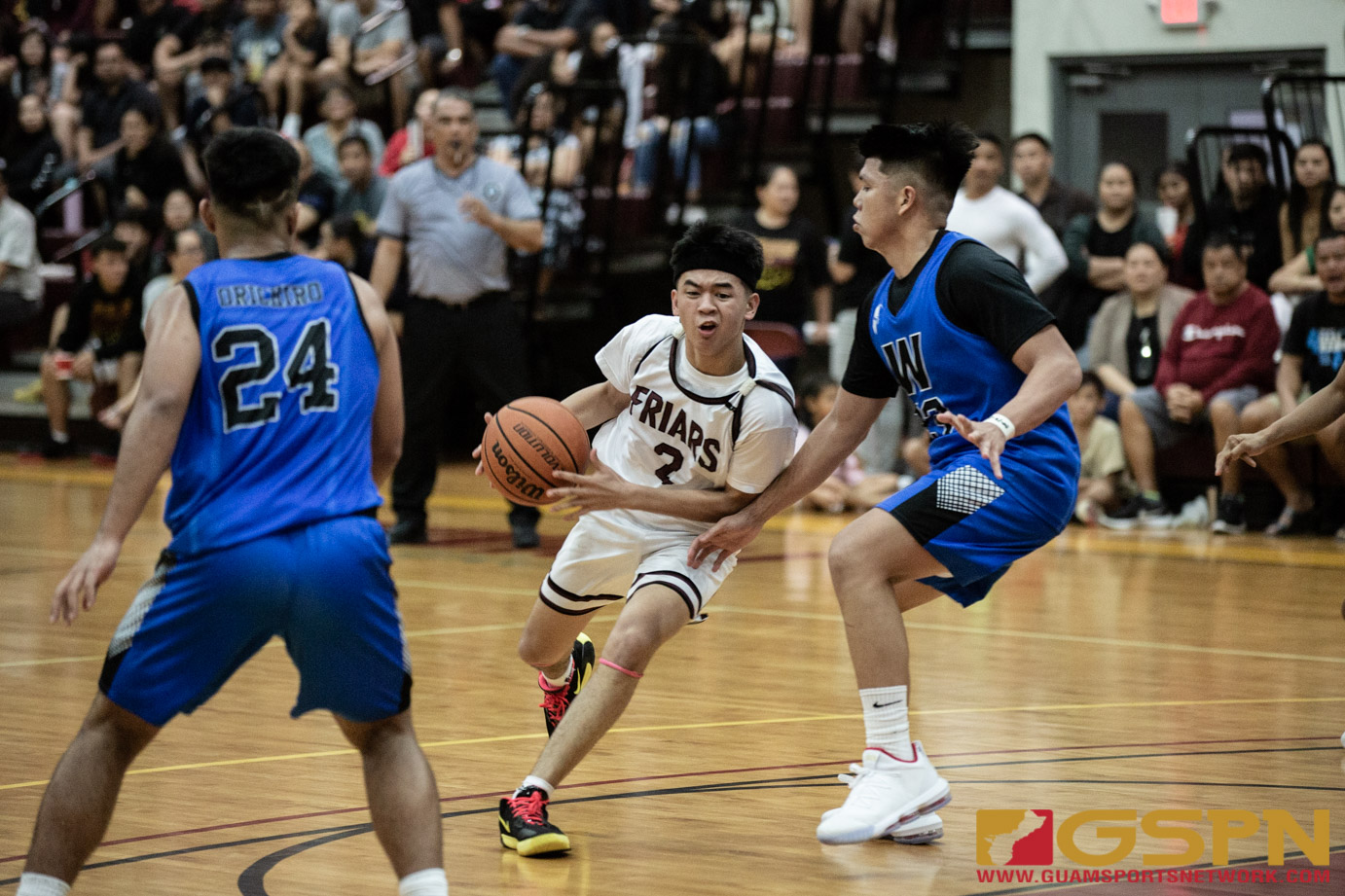 As advertised, the FD Friars and St. Paul Warriors put on another crazy game in the IIAAG Boys Basketball league. The Friars prevailed on their home court 48-39, but the last minute of the contest had technical fouls and controversy as the Friars pulled away from what was a close game from the free throw line.

With the victory, the Friars clinched the top seed for the IIAAG playoffs as we enter March Madness. The Friars remain undefeated, the Warriors suffer their second loss of the season – both at the hands of the Friars.

The Warriors started the game off strong, taking a 7-0 lead behind the play of Audrey Dela Cruz. Dela Cruz hit a three-pointer and then recorded a steal on the ensuing possession, dishing an assist to Hayato Tsuji for an easy lay-in.

The Friars tied the game at 12-12 after the first quarter after freshman star Blaise Ada hit a three-pointer and center Matt Fegurgur scored a pair of baskets in the paint.

By halftime, the Friars enjoyed a 25-22 lead after guard Colin Santiago hit a three-pointer and Fegurgur scored again in the paint.

Both teams went back-and-forth in the final period. The Friars took their biggest lead, 41-37 after a technical and fifth personal foul was called on Warrior top scorer Thelo Orichiro. Orichiro was forced to sit on the bench after drawing his fourth foul (a reaching foul) and his fifth foul (a technical foul) after arguing his reaching foul.

Things continued to escalate inside the final minute of play after Warrior head coach Neo Pineda was called for a technical foul after arguing a block/foul against FD. The Friars would make 5-of-6 free throws inside the final 30 seconds to claim the home victory.

Orichiro had a solid game for the Warriors with 14 points, six rebounds and two steals. Dela Cruz had 12 points; Miranda added eight points for St. Paul.

Fegurgur had 14 points, six rebounds and four big blocks to lead FD. Santiago had seven points and three assists, Daryll Robles had four points and six rebounds for the Friars.

This was the lowest offensive output for the Friars this season. The Warrior 2-3 defensive zone strategy held the Friars to just 48 points.

“If we meet them again in the Championship Game, we will look to just executing by listening to our coaches,” said Robles.

“They played more aggressively on defense than we did tonight,” said Fegurgur. “Our coach will determine our offensive strategy, its up to us though to execute for him”

In the event these two teams meet again in the playoffs, there will be a big crowd and a lot of hoopla to surround the game.

“We can’t pay any attention to that. I’ll just remind my team to relax and stay composed,” said Robles.

The playoffs start next week. The championship game will be next week friday.

In the junior varsity game, the Warriors had no problem winning 56-43. Jacob Miranda had the hot hand for the undefeated Warriors with 22 points.