The undefeated top seeds in the ISA and IIAAG met for the first time Monday evening with the Friars getting a win over the Bulldogs. 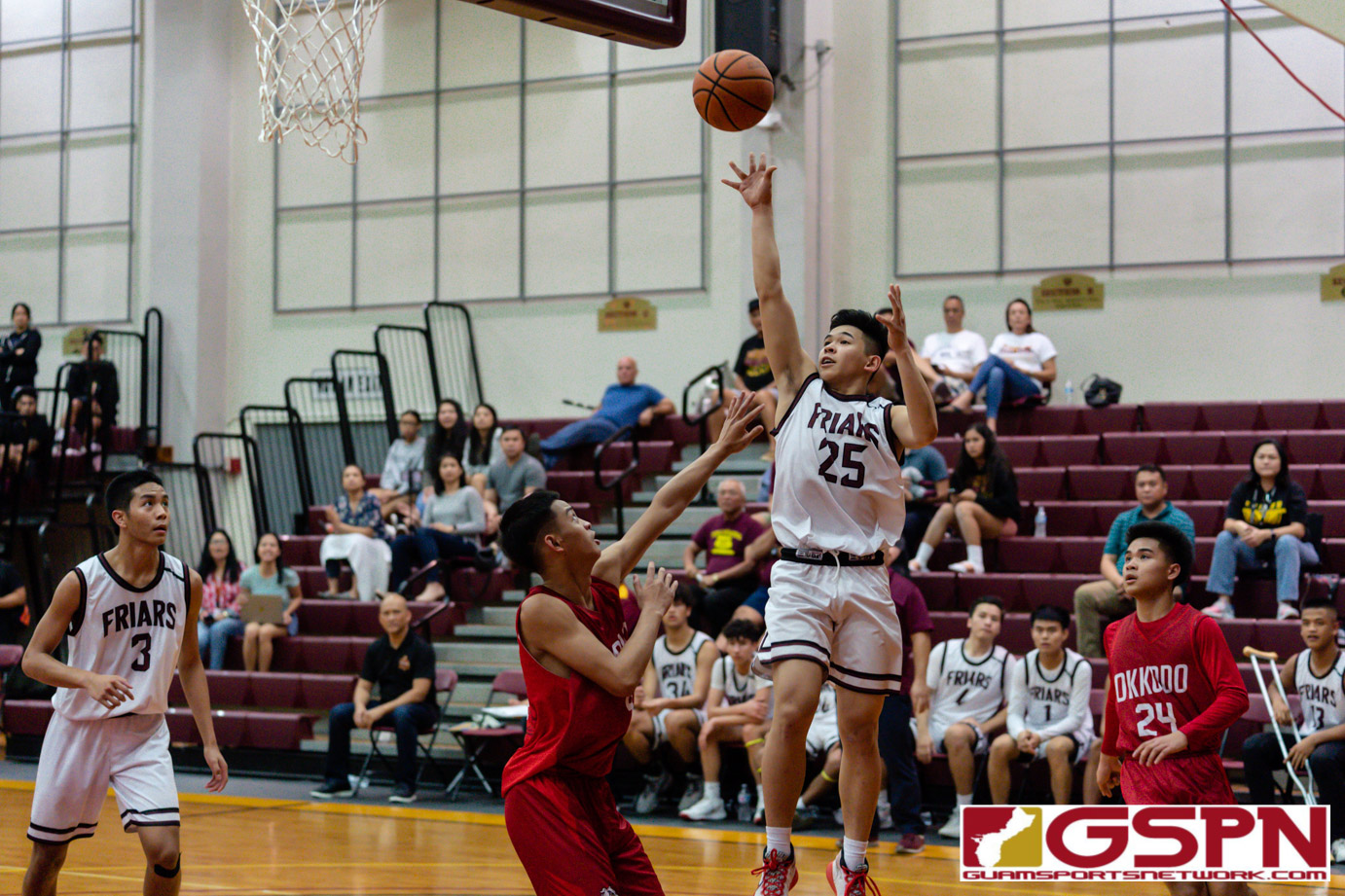 The FD Friars won a showdown in a battle of unbeaten teams in an inter-league boys basketball game against the Okkodo Bulldogs at the FD Phoenix Center. IIAAG’s Friars pulled away in the second half to earn the 60-50 victory, handing ISA’s Bulldogs their first defeat of the season. The Friars improve to 9-0 (5-0 IIAAG, 4-0 ISA), the Bulldogs fall to 9-1 overall (5-0 ISA, 4-1 IIAAG).

Matthew Santos catapulted the Friars in the second half, scoring a season high 21 points.

“We saw they were playing man-defense and I usually thrive when the other teams do that. Every time I drove to the basket, I just took it slow and didn’t rush anything,” said Santos.

Santos was crafty against the Bulldogs, finding his way to the basket off the pick-and-roll offense from the top of the key.

The Bulldogs take their biggest lead of the game (five points) after guard Jarwin Espiritu made a three-pointer go up 25-20 in the second quarter. FD ties the game at 25 apiece after Brock Ada hit a free throw followed by two lay-ins by Santos.

Okkodo’s Tristan Valdes and FD’s Colin Santiago both hit 3-pointers before halftime as the game was deadlocked at 30-30 heading into the locker rooms.

Santos gave FD some momentum, going up 41-36 after an “and-1” lay-up off a pass from Raymond Castro in the third quarter. The Bulldogs countered with bucket from Jessie Martin, but the Friars caught fire to extend their lead moments later.

The Friars went on a run behind driving lay ups by underclassmen Nathan Perkins-Fuesser and Blaise Ada. Defense was key for FD to contain the Bulldogs in the final period. The Friars forced five total steals in the quarter to prevent the Bulldogs from any momentum.

Leading the way on the defensive end for FD was 6’5” power forward Daryll Robles. Robles had two key steals in the final period and grabbed four defensive boards to keep the Bulldogs from gaining any momentum.

The Friars went to the hot hand, Santos, down the stretch and he provided two more driving lay-ups to secure the win.

“Our game plan was to just play good defense so we can defend our house,” said Santos.

“We are going to put this game behind us though and look ahead”.  The Friars have three more games this week before their showdown with the St Paul Warriors next Tuesday at the Phoenix Center.

Robles led the Friars defensively with 11 rebounds and four steals.

“I knew my team needed me to have a good game, especially with our main big man Matt (Fegurgur) out too,” said Robles.

Robles and Santiago were the only two starters from the beginning of the season to start the game Monday night.

Okkodo’s front court had trouble staying on the court with three main players being forced to sit with foul trouble. Lorena, Rylen Cajigal, and guard Kevin Cabral each ended the game with four fouls and limited playing time.

“I knew they were in foul trouble so I wanted to be even more aggressive and drive to the basket,” said Santos.

Valdes and Martin led the offense for the Bulldogs with each player scoring nine points. Lenard Baul had seven points and a monster block for Okkodo; Lorena also scored seven points and grabbed four rebounds in limited playing time.

“We all had to be really focused for this game, Okkodo is a really tough team and we had to be prepared for them,” said Robles.

In the JV Game, the Bulldogs defeated the Friars 54-50. Michael Varela led the Bulldogs to the victory with 16 points, Andrew Quito chipped in 12. Kaine Santos led the Friar offense with 14 points.