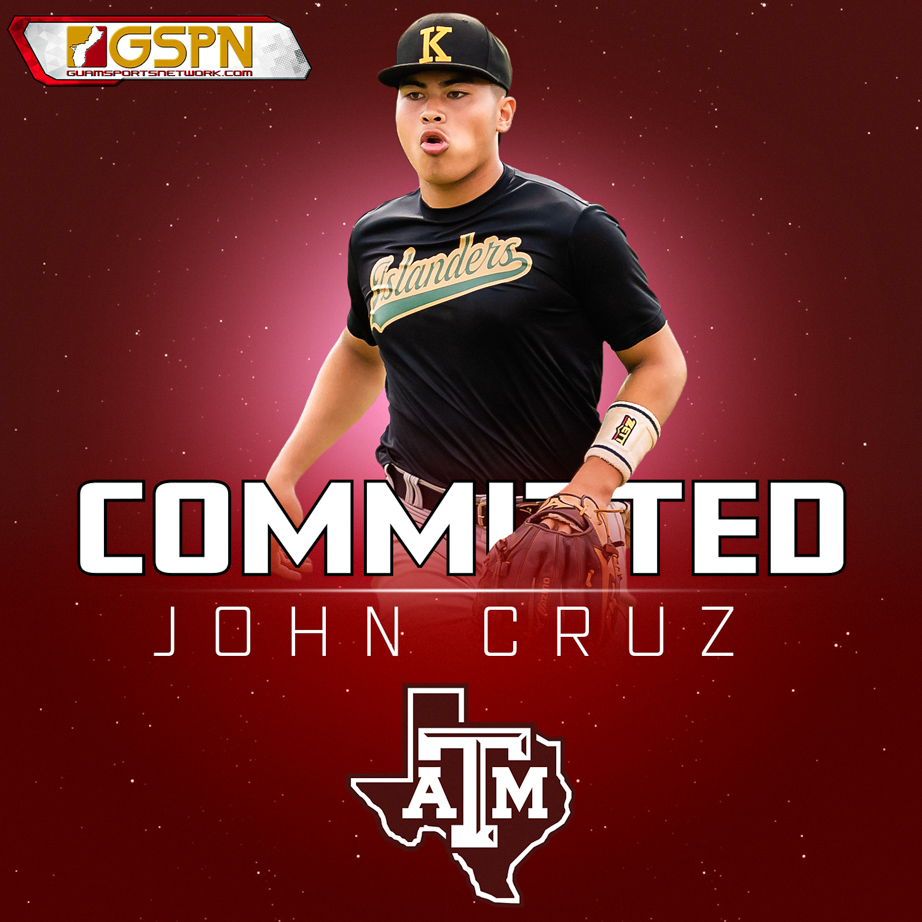 Playing Division I college baseball had always been just over the fences for JFK Islanders star Johnny ‘Base Bully’ Cruz, and his dream became a reality last week when he got the call from Texas A&M to join their Aggies ranks this upcoming season.

Cruz had been scouted since he was 10 years old, playing just one year of baseball in Texas in 7th grade. He wrapped up the season hitting five home runs which was enough for a scout to keep tabs on the young star as he moved back to Guam play out the rest of his high school career for the Islanders.

Cruz’s mother Auria lives out in Texas and assisted in giving Texas A&M the total recruitment package, as far as highlights and accolades where concerned, and Johnny got the call just last week.

“I was just sleeping one night and coach Jason Hutchins [of Texas A&M] called me saying they wanted to offer me a spot on the team. They emailed my AD and he told me the school was interested in me and wanted to give me a tour,” said Cruz on how he found out about the news.

Playing DI ball was the aim for Cruz, but Texas A&M was one of the schools he had dreamed of getting into had playing at that level was even a possibility.

“It was one of my bucket list schools because It’s close to my mom and I’m pursuing my dream for baseball,” Cruz added.

Cruz will be getting a two-year scholarship with incentives to cover a full-ride.

Coach Hutchins has already briefed Johnny on what to expect prior to heading out, and Cruz will be spending his last three weeks on island getting ready for the grind, which has included cardio training whenever can amidst the COVID-19 crisis.

“[Hutchins] just told me to stay strong and healthy and be prepared for whatever they do. They workout twice a day and that’s not something we did in high school so I’ll have to be ready for that. I got a lot of work to do this off season, but I’ll be ready. I played Texas ball before, but I just want to test my limits. There’s going to be a lot of competition there,” said Cruz.

Cruz hadn’t broke the news publicly yet, but a few close friends and family couldn’t hold back the details after sharing it over social media.

“The most exciting thing is just playing D1 baseball period. It’s just another opportunity to raise the bar for Guam,” Cruz added.

“I just want to thank everyone, my dad John McDonald, coaches Matt Muna, Paul Pangelinan and Gene Mendiola. They really pushed me to the point of not wanting to stop. It’s muscle memory now and I just want to play baseball. They’re a big part of me getting to play college ball now. If I ever needed to fix anything they’d always be there to help me and I can’t thank them enough. Also, BIBA ISLANDERS!!”

Cruz wrapped up his final year with a baseball title at JFK, completing a three year resume. He missed his junior season due to injury, but was a stalwart on the All-Island list each season.