Round 1 of the 8 round 2020 Monster Energy Guam Motocross Championships kicked off this past Sunday at the Guam International Raceway in Yigo. 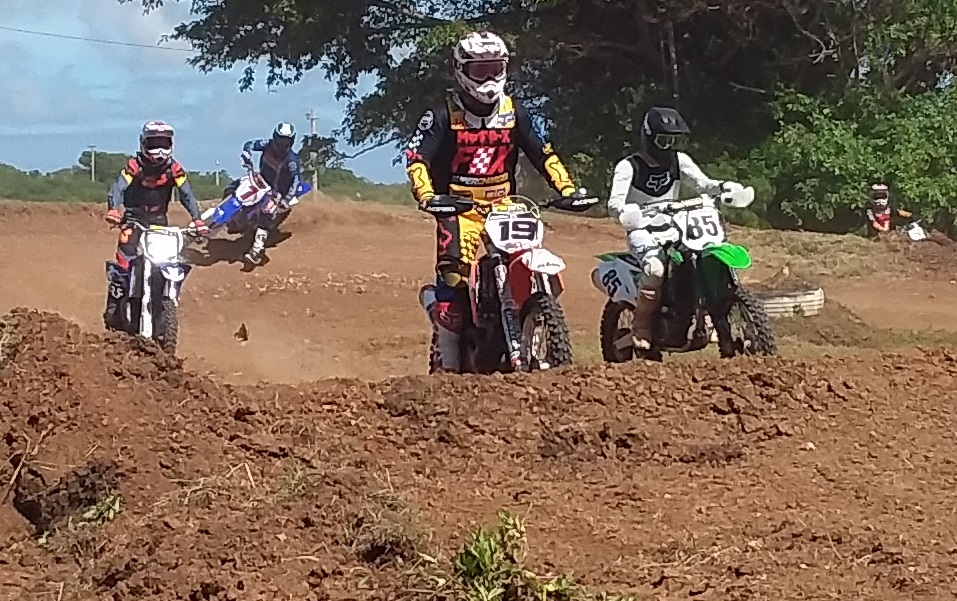 PRESS RELEASE – Round 1 of the 8 round 2020 Monster Energy Guam Motocross Championships kicked off this past Sunday at the Guam International Raceway in Yigo.  With a well worked and revamped red dirt course that was built and filled with jumps and switch back turns ideal race conditions were set for a great day of close side by side championship racing.

Racers of all ages competed in a two heat format each in their own respective age and displacement classes making for a full day of bar banging family fun. Once more with a course loaded with jumps, bumps, and many high banked turns the participants and their many fans and family supporters were back lining the course for what was an incredible day of high flying action.

The event was encouraging the public to bring the entire family along with their canopies, coolers and folding chairs out to the Jose and Hermenia Calvo Memorial Offrad Park located at the Guam International Raceway for a full day of exciting racing.

In the Open Motorcycle defending Monster Energy Guam Motocross champion #1 Lil John Agoun aboard his RPM Yamaha supported 450 swept the round to take the win with #85 Cycles Plus Kawasaki rider Blaze Aiken hot on his rear wheel and at times putting in hard charges challenging for the lead taking a solid second.

#57 Kim Aiken joined his son Blaze on the podium by taking third. #11 Mike Limtiaco on his Kawasaki took a strong fourth place finish with #343 RJ Santos on a Yamaha rounding out the final spot in the top five.  The rest of the field finished respectively as follows. #23 Jordan Leon Guerrero, #27 Marvin Pangelinan, #19 Zachary Chang, #74 Damian Manibusan, #17 Riley Clark, and #619 Aaron Overstreet.

In the 450 class Rpm Yamaha supported Lil Jon Aguon took the win with #11 Mike Limtiaco in second on his Kawasaki and #19 Zachary Chang on a Ktm in third. Taking fourth was #17 Riley Clark on a Yamaha.

In the 250 class Cycles Plus Kawasaki team rider #85 Blaze Aiken swept both heats for the in with his father Kim Aiken riding the #57 machine taking second. Third went to #343 RJ Santos on his Yamaha with, #23 Jordan Leon Guerrero , #27 Marvin Pangelinan, and #74 Damian Manibusan rounding out the field respectively.

In the Schoolboy/girl class #23 Jordan Leon Gurrero on his LG Racing supported Yamaha flew his way to the win with #74 Damian Manibusan on his Yamaha in second and #193 Franklin Fujihira Yamaha mounted in third. Taking fourth was #25 Lawrence Lmtiaco aboard a Suzuki.

In the Open Minibike class #31 Richard Wenden aboard a KTM swept both heats for the win. #22 KTM mounted Wyett Santos took second with #25 Lawrence Limtiaco who was aboard the team Cycles Plus Kawasaki placing third. Fourth place went to #10 Jerren Nauta on his Honda with #33 Mariana Wenden in fifth and LG Racings #12 Jessani Leon Guerrero in 6th.

The 65cc Kids Mini Bike class had  #18 Jonboy Aguon taking first on his Yamaha with second being taken by #20 Jace Calvo on a Ktm. Taking third was #75 Jay Whitman with #15 Ty Overstreet in fourth.

In the 50cc Kids Minibike class saw a dominating win by #11 Leo Limtiaco with #98 Caden Castin in second. Taking third was #50 EJ Larance with #13 Charliegh Moore in fourth.

Next up on Sunday March 1st the Guam International Motorcycle and Atv Corporation would like to invite everyone down to the beautiful southern village of Umatac for the Guam History and Heritage Festival Motocross races. Racing is located next to the iconic Umatac Bridge in what is known as the carabao track.

Gates open at 8am and the racing kicks off at 11:30am. With several class championships being contested everyone is invited to attend to watch free of charge what is sure to be another full day of non stop dirt flinging racing. Interested new or experienced riders are encouraged for more information to visit https://girmac.teamapp.com  or contact public information officer Robert Bucek by call or text at 727-5381.