The Guam High Panthers scored 26 unanswered runs to stun the JFK Islanders in the first day games in the ISA Girls Softball League. 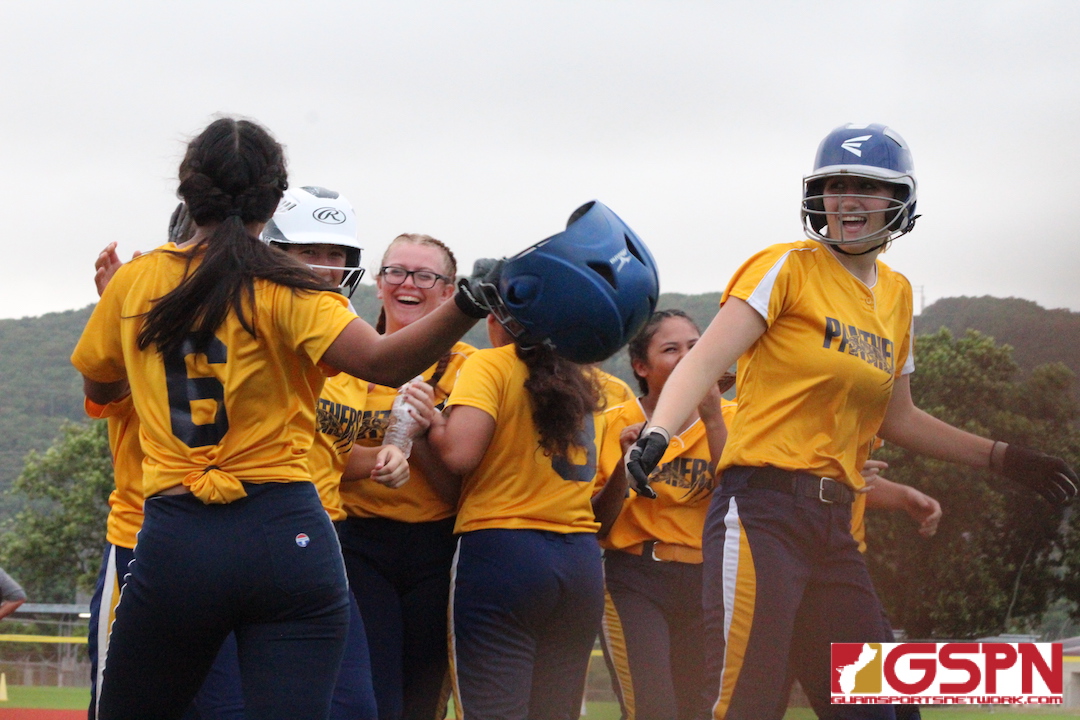 Once down 13-2, the Guam High Panthers put forth a rally like none other, scoring 26 unanswered runs to beat the visiting JFK Islanders 28-13 in the first game of the ISA Softball League Tuesday afternoon. A disastrous 3rd inning for JFK resulted in 15 runs for the Panthers to completely turn the tide of the game that ended in the 4th.

A grand slam from Panther Lexi Blyth in the 3rd broke a 13-all game to give the home team their first lead in a big way 17-13. But prior to seizing control of the game, the Panthers were in an early game rut.

Islander Kiyonii Yamaguchi had just hit a two-run homer to giver her team a 12-2 lead off Blyth, who was also the Panthers starting pitcher. The top of the 3rd inning would end with the Panthers down 13-2.

“Having a young team and being our first game, that definitely had an influence on us the first couple of innings. Also, my pitching wasn’t exactly where it was supposed to be and obviously it all starts with pitching and it’s going to rub off on everybody else,” said Blyth on the shaky start.

Instead of hanging their heads, the Panthers entered the bottom of the 3rd inning determined to show more fight.

Islander Lani Blaz stepped in to pitch to start the 3rd inning and had a rough start hitting two of three batters to bring in the first of the Panthers 15 scored runs. An RBI from Hina DelaSierra along with a pair of pass balls had the Panthers down 13-8. Two more walks brought in runs followed by another hit by pitch and pass ball to tie the game at 13.

Blyth felt something special brewing with the bases loaded as she unloaded Blaz’s pitch deep left for the game-breaking grand slam.

“Coach Camacho always tells me endlessly, ‘pitch selection Lexi and you got to know what you want’… When that second [pitch] came in, you can feel it in your bones and you just know. When you feel the crack of that bat, you already know what is about to happen,” said Blyth on her grand slam.

The Panthers ended the top of the 4th inning on a double-play, keeping JFK scoreless in the inning before prepping to fire off more runs in the bottom of the 4th. Guam High’s Lani Camacho smacked a ball into a dead zone for a 2RBI single for a 20-13 lead before the Islanders decided to retire Blaz.

More errors would do the Islanders in with a 28-13 final.

Guam High’s young roster showed a surprising amount of resilience against the Islanders despite many being underclassmen. For the senior captain Blyth, watching her team rise to the occasion only bodes well for the teams future games.

“I was so proud. I was a little worried after the first inning, this team is mostly freshmen so I didn’t know if they were going to keep their spirits up, but I’m so happy to see that they didn’t give up,” added Blyth.