WHERE R THEY NOW? POLLARA COBB 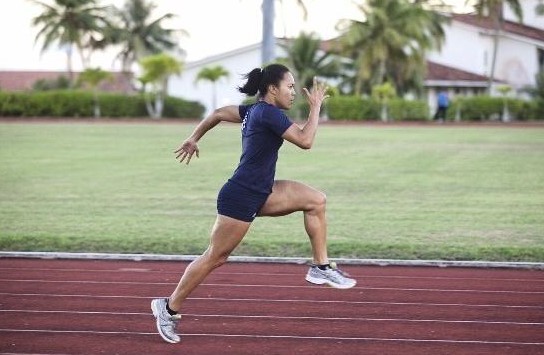 Shieh Su Ying Scholar-Athlete of the Year Keynote Speaker, May 2014

Youngest member of Guam’s National Team then at age 14

Former Guam sprinter Pollara Cobb, who is still in medical school, has spent most of her quarantine time studying and preparing to return to clerkships, which includes learning about telemedicine and the ins-and-outs of COVID-19. She is set to graduate in May 2022.

How do you compare your new career with your events as a sprinter? Is it a sprint or a marathon?

Currently, I am training to become a medical doctor. The joy I feel learning about medicine and using my knowledge and skills to help others is similar to the joy I felt sprinting 100-meters down the track. The training is difficult and exhausting, but I show up nonetheless because I absolutely love what I do. The main difference, however, is the approach and the mentality. Without a doubt, becoming a physician is a long and arduous course that requires resilience and tactical distribution of energy. In that sense, it is a marathon: endurance over speed. However, I am untraditional in my views in that I don’t see my process being any sort of race. I’ve liberated myself from the mental trap that there is a time to beat, a set distance to cover, or a finish line to cross in regards to my life goals. Rather, I embrace my journey and devote myself to learning, challenging, reinventing, forgiving, and ultimately embracing who I am.

What’s some of your fondest memories representing Guam?

One of my fondest memories representing Guam would be the 2011 World Championships in Daegu, Korea. Many people proclaimed my track career over after I tore my meniscus and ACL playing rugby in 2008. After extensive recovery, physical therapy, and training with limited resources, I returned to set a new 100m national record for Guam while competing against the world’s best athletes at the World Championships. That day, I learned a very important life lesson: never limit yourself to the beliefs of others. I cannot thank my coach Carl Cruz enough for teaching me the meaning of “trust the process.” I am a strong believer that diligence and resilience will prevail against any setback. I always try to keep these lessons in mind.