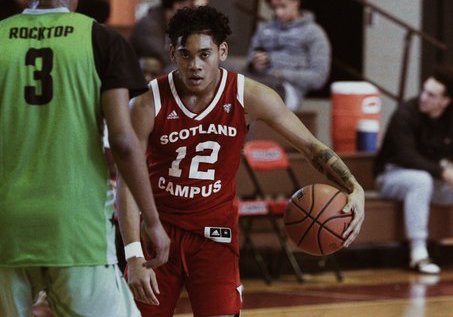 St. Paul Warrior alum Jahmar White is embracing the basketball grind. White joined the Global Squad Academy (a program designed to help prep student-athletes for the collegiate level) after graduating from high school in 2019 where he showed promised through five games. White was then referred to Scotland Campus in Pennsylvania, a power house National Prep school where he currently resides.

Scotland Campus finished as the number one prep school in the nation in 2019 and White couldn’t pass up the opportunity to join their ranks. White has a handful of international experience since playing on Guam, but he’s well aware the game in the US is a different speed.

“I first heard of Scotland from my AAU coach John Alexander from global squad. It was kinda of just an opportunity that opened up and I thought it was a good idea for me to do a prep year at Scotland because not only is it a National Prep powerhouse but to prepare myself for college and acclimate to the American game,” said White via online messaging.

It didn’t take long for White to fit in with Scotland as he scored double-digits in his first stint, instantly catching the attention of everyone at the gym.

“I really found my role for my team in my first game with Scotland. I had a pretty good scoring output and knew that was going to be my thing for this team moving forward,” said White.

10 games in, White is averaging 20 points, 7.6 assists and 3 rebounds per game. White poured in 29 points in the second half against KOA Prep and has scored at least 20 points in each of his games this month.

“My coach uses me as a hot-shooting guard who can spark runs with my shooting, craftiness, and finishing acumen.”

White had always been a capable scorer averaging over 20 points per game in his final year of high school, but the way he’s been able to adjust only bodes well for his collegiate dreams. He’s since developed a more consistent perimeter game instead of dominating the paint since the height difference has forced him to find new ways to score.

“The transition was pretty smooth. The biggest difference was the athleticism and size of the players. I had to change my game completely. Being my size you have to be able to shoot or you won’t last. But overall, basketball is basketball. It’s still the same game wherever you are. if you can play, you can play,” added Jahmar.

Scouts and coaches from collegiate programs have been keeping tabs on White, but his only mindset right now is to continue to ball out as a member of Scotland Campus. And as far as he’s concerned, working hard and enjoying journey will get him where he wants to be.

“My plans right now are to finish the season strong. Then after the season, I have some visits to go on before I pick a school. We have coaches at our games pretty often, but you never know who’s watching so you have to go out and compete every time you step on the court. I’m most definitely taking it all in, I really enjoy the process. That was the biggest thing for me this season at Scotland. It’s a great feeling when you work extremely hard for something and see the hard work pay off in the long run.”