A recap of the first ever APL Fiesta Race Weekend. 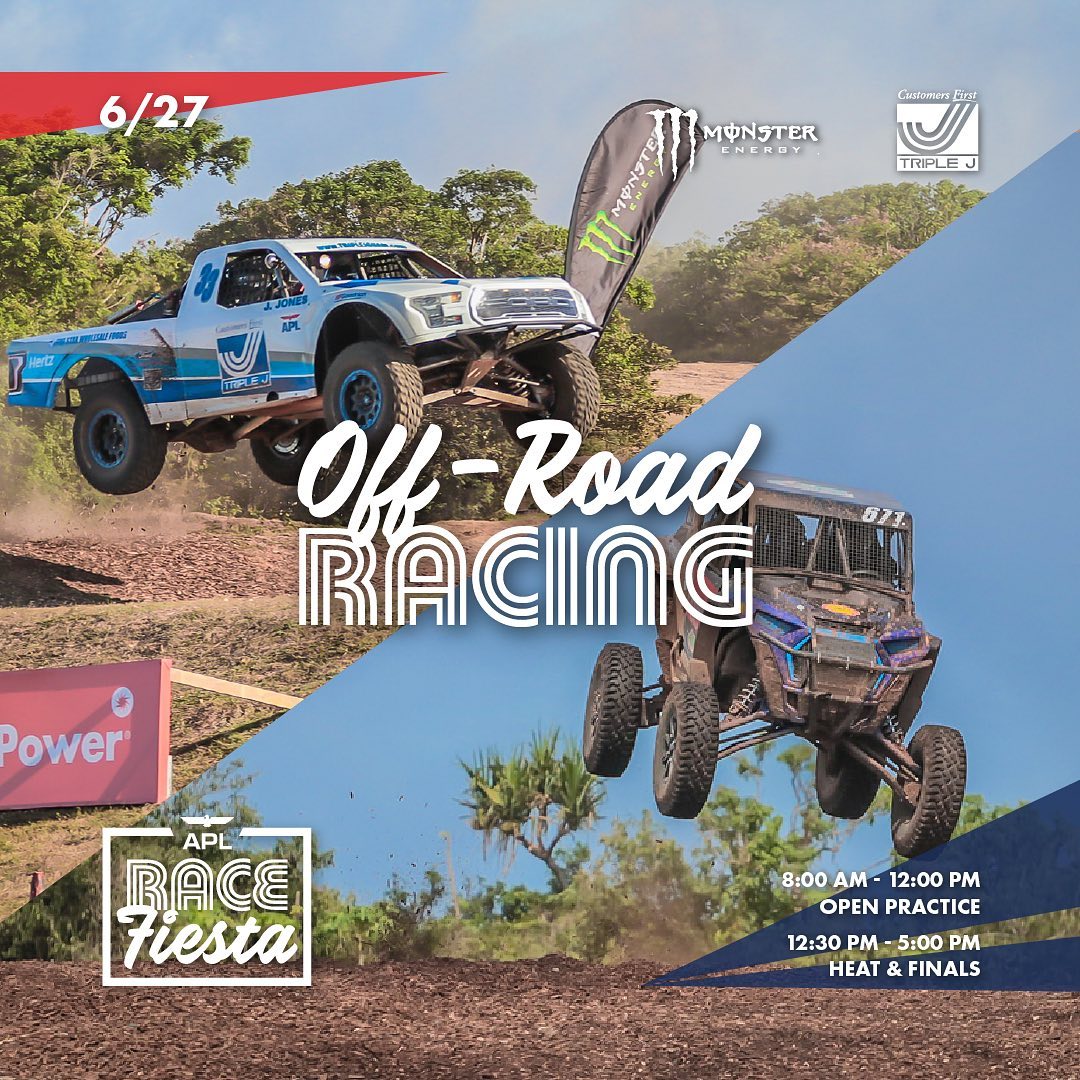 The first ever APL Fiesta Race Weekend was held this past Sunday at the Guam International Raceway in Yigo and included both motocross and off-road utv and buggy races along with a list of other high-octane motorsports. Saturday’s motocross saw racers of all ages competing for trophies and swag prizes presented by a host of great sponsors. Racing kicked off at 11:30am after a full morning of warm up practices that began at 8am. Classes ranged from several sized kids’ minibike and atv classes along with a women’s minibike class up to the larger fuller sized machines of the 250, 450, Open and Over 40 Vet classes.

Included in the lineup were the Schoolboy class and a Novice class for those newer racers to compete in. On Sunday, the big guys lined up for off-road heat races in both the Utv class that saw a turbo and non turbo divisions compete, and the big buggies were also on hand and competed in their own separate thirty-minute heats.

In heat one of two in the Open Motorcycle class Yamaha mounted #7 Jr Cepeda came out firing from the gate as he led a thundering stampede through the first turn. Cepeda was closely followed by the Cycles Plus supported team riders of #1 Little Jon Aguon and #85 Blaise Aiken both aboard Kawasaki’s. The three leaders quickly separated themselves from the rest of the field and began a heated battle for the lead. Cepeda was looking strong up front as Aguon began to get challenged for second by his younger teammate Aikens. Aikens was probing for a place to make a pass on Aguon and after several laps pulled the trigger on the Monster Energy Guam motocross champ and made the pass. It was Cepeda in first at the end of heat one with Aikens in second and Aguon in third.

Looking for redemption in heat two the #1 machine of Little Jon Aguon launched out of the heat two start gates and had pulled nearly a two-bike length lead over the pack as they roared through the first turn. Running in second was the first heat winner #7 Jr Cepeda holding his throttle what sounded to be wide open as he clung o the rear wheel of Aguon who was leading. Aiken was holding third and was close to he two leaders to make a move early on, but it was not o be as the #1 machine of Aguon motored away to take he heat two win with Cepeda only needing to finish second in the heat to take the overall win he cruised it in for the overall with Aiken in third. Cepeda was the 2021 APL Fiesta Race Weekend motocross champ with Aguon second and Aikens third. The remaining top ten finished as follows.

Up next on 2021 Monster Energy Guam Motocross Championship schedule will be round 6 on Sunday July 18th to be held at the Guam International Raceway rt15 Yigo. Gates open at 7am with practice to begin at 8am. Sign up and registration from 10am to 11am. Riders mandatory safety meeting at 11am with racing set to begin at 11:30am.  Spectators are welcome but are required to follow the posted covid19 safety protocols. Those interested in getting involved or are looking for more information can visit www.GIRMAC.Teamapp.com or contact Robert Bucek at 727-5381.

Sunday saw the big dogs come out to tear up the lawn so to speak with their thousand cubic centimeter turbo and non turbo Utvs along with the big riggs of the Open two and four wheeled buggies. Up first were the Utvs who were all staged according to a draw of numbers from a hat. Up front overall leading the swarm from the poll and into the green flag start of the first of two thirty-minute heats was #11 Robbie Crisostomo in his 1000cc non turbo Polaris followed by a hard high flying #1 Henry Simpson in a turbo powered 1000cc Polaris with #22 Joey Crisostomo in a Kawasaki, #91 Donavan Pitter, #65 Ken Rios and #19 Zachary chang all in chase respectively.

The #11 of Robbie Crisostomo was looking strong hitting his marks and pulling away from the rest of the field. The battle for second heated up quick as the #1 of Simpson who had a good lead over third place #22 Joey Crisotomo began to drop off the pace do to a small issue in the cockpit with an air hose. The #22 showed little mercy as he passed the #1 of Simpson for second. At the end of heat one it was the #11 of Robbie Crisostomo in first, the #22 of Joey Cisostomo in second and the #1 Utv of Henry Simpson in third.

Heat two staged in the order of their heat one finishes and once again saw the #11 utv of Robbie Crisostomo leading the swarm of utv competitors to the green flag start. Once the green flag waved #11 was on it with the #22 in second and the #1 of Simpson pushing to make the pass into second. Two laps in he #19 of second heat driver Dongman Chang flipped causing a red flag halt for a safety recovery. Once the #19 was recovered and the course was declared clear the restaged drivers once again took the green flag and the race clock resumed. With no other issues the heat went nonstop to the checkers with #11 Robbie Crisostomo taking the overall Utv win and the 1000cc non turbo class win. The rest of the field results are as follows.

In the Off-road Buggy class #57 Robert Crash Korientz in an under four cylinder thirty something year old buggy pulling from the draw the pole position for the start of the irst of two thirty minute heats with the #33 Team Triple J Ford truck with Jeff Jones driving staged right behind him. Rounding out the line up was #72 Kiwi Chris Rebbets. Almost immediately of the waving of the heat one green flag start the #33 and #72 machines blew past the smaller older #57 relic and began to fly around the high-speed course.

Taking the lead was the #33 Ford driven by Jeff Jones with the #72 of Kiwi Chris Rebbets in second. Kiwi was starting o make up time on the Triple J Ford as he could see its dust up front and seemed to then go into a ballistic missile mode tracking and trying to catch the Ford. The Triple J Ford didn’t react and kept its fast smooth line around the course allowing the #72 of Kiwi to slowly make up ground on them. At about or near the fifteen-minute mark the #72 may have gotten to close to the #33 and perhaps got lost in its dust as it lost control and flipped itself out of he heat and the event. At the finish of the heat it was the #33 Triple J Ford taking the win with the #57 relic of Robert Crash Korientz in second.

Heat two had the #33 Triple J Ford now being driven by Jay Jones taking he poll and the green flag start with the #57 of Robert Crash Korientz in second. It was a cruise for the Jones brother as he brought it home in one piece and ready for he next event. The #57 relic ran flawlessly and easily took home the under four-cylinder class win. Results are as follows.