The long and winding road to black belt 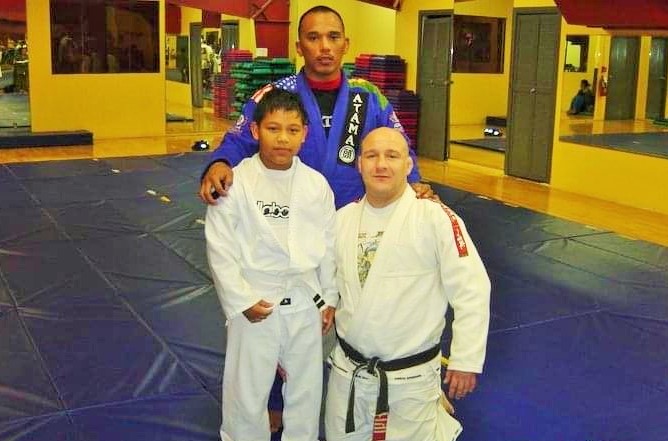 If there was anyone on island who took the long road to becoming a jiu-jitsu black belt, it has been Gabe Baker.

The long-time head coach of Carlson Gracie Jr. Academy finally received his black belt on Saturday from Gracie himself along with five other teammates: Clifton Nededog, Ashley Pueblo, Carlos Grifith, Chris Camacho and 2019 GSPN Athlete of the Year Anthony Cruz.

Social media has been abuzz with word phrases like ‘finally’ and ‘long over due’ in reference to Baker’s promotion. GSPN gets Baker’s perspective on the move into the black belt world.

GSPN: First off, Congratulations! So many people had one word in reaction to you getting your black belt from Master Carlson: Finally. How much of a relief was that for you?

GB: I never really thought about it nor was it ever a rush to get my black belt. I’m extremely happy overall and grateful for all the well wishes from friends locally and across the globe.

GSPN: You have always stayed humble and patient on your path to the black belt, but there’s got to be a part of you that felt that the brown belt was already turning tan.

GB: Humility is a huge part of martial arts and very important as an instructor. I actually switched my brown belt three times due to wear and a little size change.

GSPN: This was a long time coming, especially with Carlson Gracie Jr. coming out for the big promotion. What was the feeling like for you to see not only yourself but your jiu-jitsu family get promoted?

GB: Quite honestly, I was more excited for them to get promoted then myself. That alone was so heartfelt and honoring to witness.

GSPN: For those of us who don’t know, give us a history lesson of how your relationship with Carlson Gracie Jr. all came about?

GB: I’ve always been a huge fan of the Carlson Gracie family. 20 years ago the team was in Manila for a seminar and I decided to jump on a plane and attend. They were so blown away when they found out I made that trip just to see them, they offered to come to Guam to do a seminar. Months later we held the seminar on Guam. It was an exciting time. Soon after they were inviting me to the head academy that’s located in Chicago. I would spend several months a year living with Master Carlson Gracie Jr. all while training under the watchful eye of Grand Master Carlson Gracie Sr. I was a simple blue belt at this time but I quickly learned that it wasn’t about my belt rank. We truly became family. I sat and ate dinner with one of the legendary Gracie’s and he treated me as a friend. That I will never forget. I’ve been loyal to the Carlson Gracie team since then.

GSPN: More than 10 years after opening your gym, how do you feel the sport evolved on the island since the BJJ boom of a decade ago?

GB: The growth of jiu-jitsu is amazing since I first started. So many academies popping up. It’s wonderful to see how many have taken jiu-jitsu into their lives. Biba Guahan Jiu-jitsu!

GSPN: You’ve seen a generation of students come and go with some very notable ones doing great things in the sport and in our community. Is that more satisfying to you than teaching them positions?

GB: There was a time that medals and championships meant everything to me. Now that I’m older, I realize that it’s been about raising and training great individuals. I’m most proud of all my students for who they became through jiu-jitsu. Such a blessing to witness.

GSPN: What’s next for you now that you finally got your black belt?

GB: Lose some weight, which is pretty obvious, then continue doing what I’ve been doing for the past 19 years – developing positive individuals for the community.