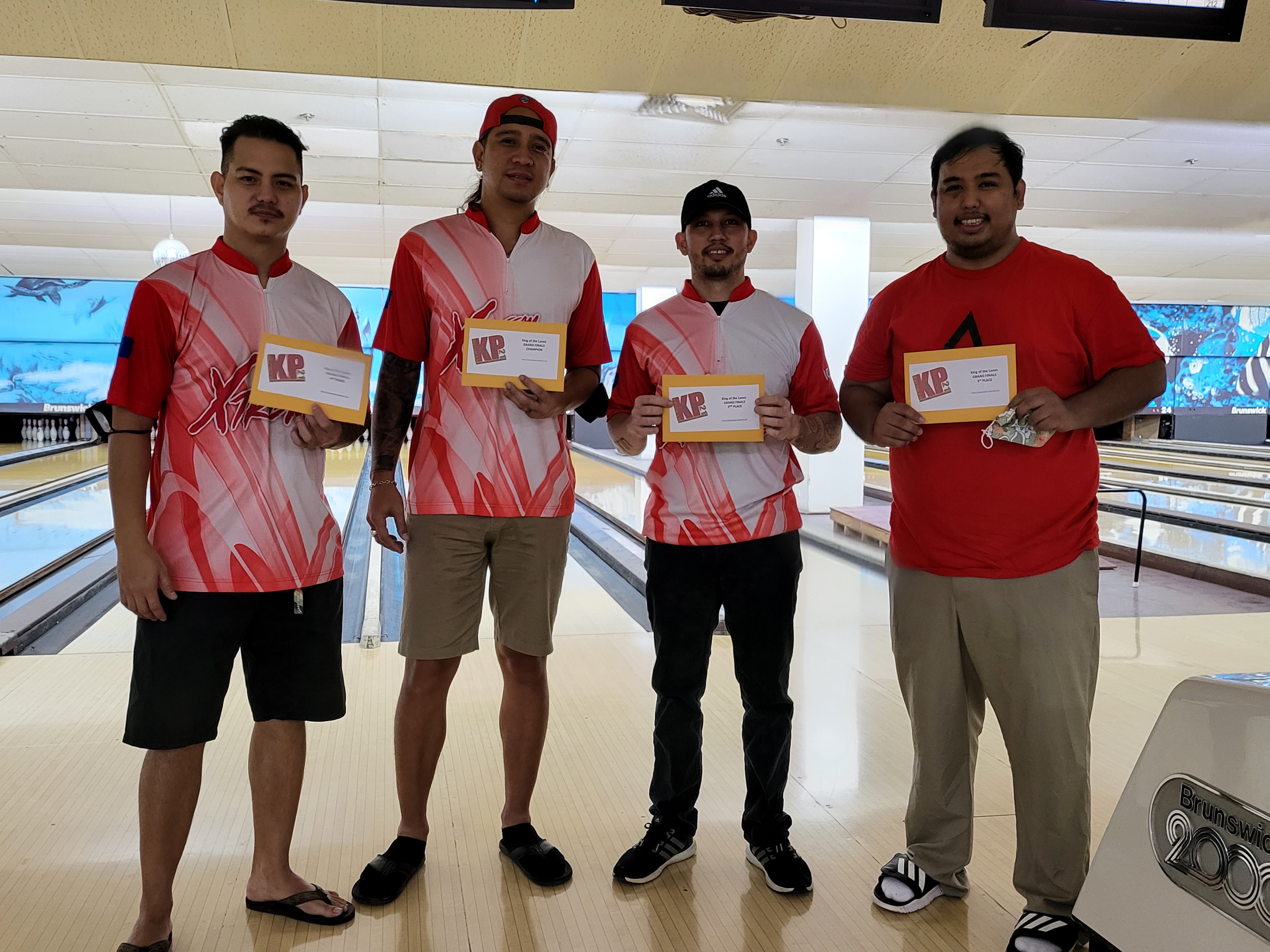 Guam’s top bowlers converged on Sunday, December 19, 2021, at the Central Lanes Bowling Center to contest the coveted 2021 Budweiser King and Prince of the Lanes Grand Finals crown.  The competitors consisted of the monthly winners and top bowlers from the leader board who accumulated points during the yearlong qualifiers.  The bowlers competed over three alternating lane patterns with a 34’, 39’, and 44’ program.

The King division was contested over six games with the top four bowlers advancing to the elimination rounds.  Veteran National Team mainstay Jay Leon Guerrero jumped to an early lead with a 243 game to open the event, 18 pins ahead of Charlie “MamaChar” Catbagan.  Leon Guerrero increased his lead to 43 pins after two games as Justin Mendiola bumped up to second.  A high-scoring third game affair saw a change in guard as 230 games by Gregory Borja, Brian Manibusan and Aaron Elliott tipped the scale with Borja topping the chart by three sticks over Manibusan.  Borja continued to build momentum as he pounded the pins for a 257 high game to strengthen his lead over the field, 96 ahead over Justin Mendiola.  Borja’s lead dwindled after five games but managed to maintain a firm lead going in the final position round with Aaron Elliott in second as a crowded field eyed the top four positions towards the elimination round.  Brian Manibusan was seven pins adrift from Elliot while Leon Guerrero was on the cusp, five pins ahead of JD Castro.

With one game remaining to qualify for the grand final elimination rounds, Borja poured in a 238 game to solidify his grip on the pole position.  Brian Manibusan moved up to second with a 236 game while Aaron Elliott dropped to third after a 224 set.  JD Castro slipped into the final four mix, as RJ Santos, Charlie Catbagan, Jay Leon Guerrero, Justin Mendiola finished in order.

In semi-final action, the lower seeds seized early control in the single-elimination format as JD Castro opened a 24-pin advantage over top seed Borja.  However, Borja managed to close the gap mid-game with a turkey from the fifth to the seventh frame to come within a mark of Castro.  Unfortunately, Borja’s spare attempt at a 6-10 leave sailed right which ended his chance for another grand final shot as Castro advanced on a 204-166 tally.  In the adjacent lane, Aaron Elliott jumped all over second seed Manibusan’s early error and never looked back as he dominated the match to advance to the finale against Castro.

The grand finals match between 3rd seed Aaron Elliott and 4th seed JD Castro was close through the first seven frames of the game as Castro managed a one-mark lead throughout the set.  Castro found his groove in the late frames stringing a five-bagger to open his lead and eventually claim his first grand finals championship with a 212-164 margin. Castro also became the first alternate bowler to be crowned champion of the King of the Lanes title in the 21 years of the championship.

Robert Leones was the only Prince bowler to bowl with a 200 game, as he took a 23-pin lead to open the first of four-game series. Gomez Martinez took a one-stick advantage after two games, as the tough lane conditions began to settle in.  Leones moved back into the top spot sharing the post with Aaron Hernandez going into the final qualifying game.   In the position round, Nick Gutierrez claimed pole position edging Leones by six pins as Claricelle Lanuza jumped three spots to qualify for the elimination round with Gomez Martinez occupying the final spot.

Gutierrez ousted fourth seed Gomez Martinez in the first of two semi-final matches as Martinez was unable to convert spares on the last two frames of the match.  In the 2nd and 3rd seed match, Leones fumbled in the fill frame as 3rd seed Lanuza used her handicap advantage to edge the higher seed by a stick and move into the grand finals against top seed Gutierrez.

Lanuza used consistent spare shooting as she kept top seed, Gutierrez, at bay and eventually claimed the 2021 Budweiser Prince of the Lanes title with a 160+36 to 152+12 outing.

For their efforts, the top bowlers were awarded prizes courtesy of Budweiser and Century Plaza.