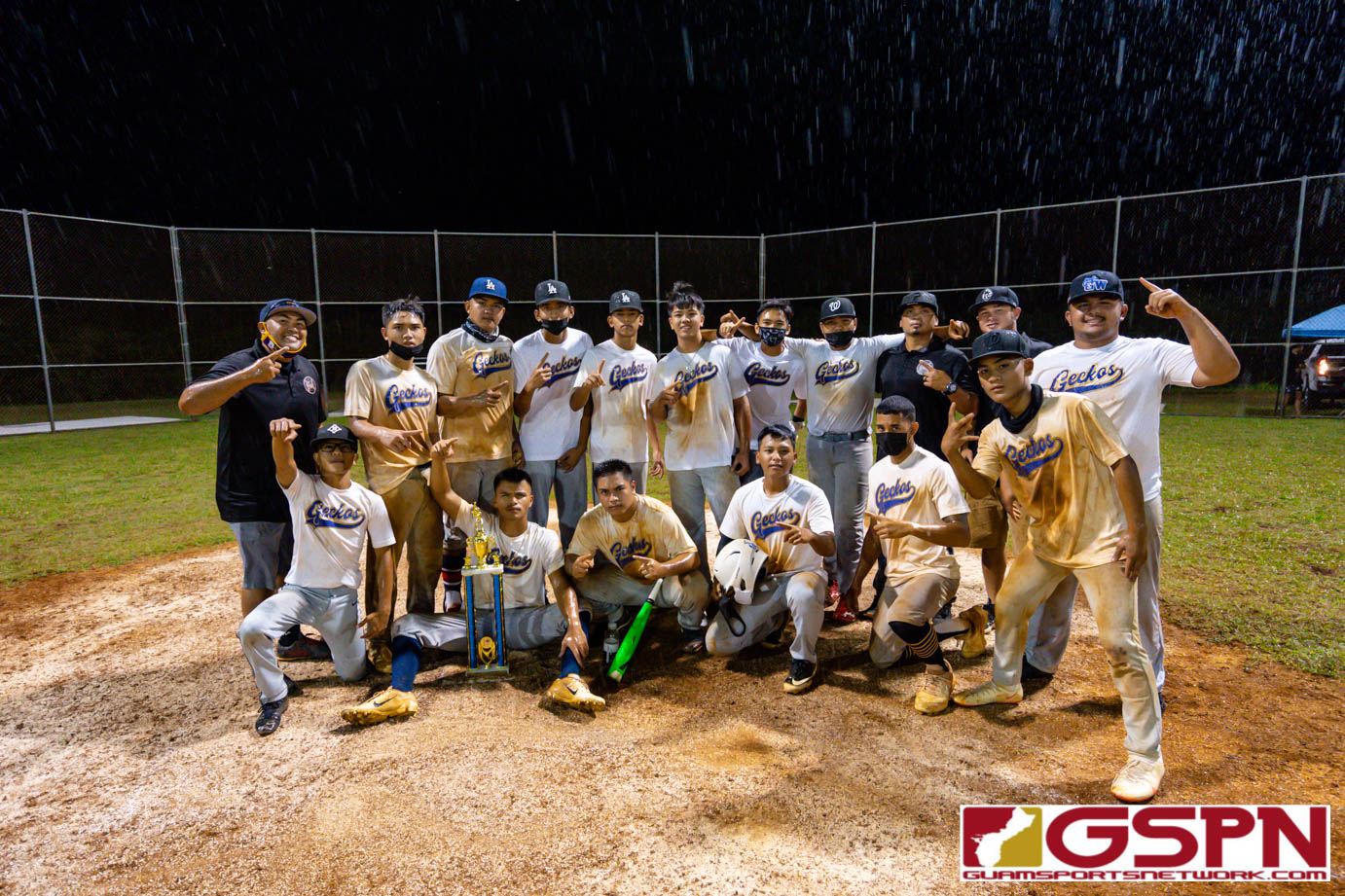 GW Gecko Aiden Gumataotao knew exactly what was at stake as he stepped up to bat down 5-4 with two outs away in the 10th inning of the ISA Boys Baseball Championship Game Saturday at the Okkodo Field: Make a play or settle for 2nd place.

Gumataotao had the bases loaded and needed just one run to tie, but with the game already creeping over four hours of play time, Aiden decided to wrap up the contest by hitting a deep ball left that was out of reach for ND’s left field. Gecko Jace Gumataotao trotted in to tie the game followed by the game-winning run by CJ Tenorio as the ball was still trying to find its way to the infield, putting GW ahead 6-5 for the win.

“Going up with two outs my coach told me ‘all heart’. Coming into this game I knew my sticks weren’t there and I had to be there for my team some how. Whether it be fielding or batting I knew I just had to be there for them,” said star of the evening Aiden Gumataotao.

The Geckos stormed the field as soon as Tenorio touched home plate after what was an excellent display of defense by both teams through the 10-inning grind. The Championship Game required extra innings with both teams deadlocked at three runs from the 4th inning on.

The Geckos have now won the baseball title four times in the past six years with their last being in in the 2017-18 season.

Saturday’s loss was a heartbreaker for the Royals, who finish in second place for the second straight season after losing in the title game to JFK last season. The Royals tightened up their errors against the Geckos in their rematch after GW had defeated them via mercy-rule in the regular season.

“We knew ND was going to bring it and we knew they had the power. But we came out here with all heart knowing that we’ve been working hard and it all paid off here,” said Gumataotao.

The 10th inning got off to a great start for the Royals after Arren Yatar brought in a lead-changing run with an RBI single. An errant throw to home allowed ND’s Brandon Tuquero to score, putting ND up 5-3 with one out.

GW relieved pitcher Javen Pangelinan, who took over in the 8th inning, for the league MVP Ashton Tedtaotao after ND’s two scored runs. ND would fly out on their next two at bats to set up the wild 10th inning.

The bottom of the 10th was looking grim for the Geckos at the start as ND’s Guifon Terlaje struck out GW’s lead hitter Hoben Lizama. Tedtaotao was next to bat for GW and his stick went straight to the Royals shortstop, but an errant throw to first base allowed Ashton to get to second to breathe some life into the Geckos.

Terlaje would walk GW’s Jace Gumataotao, but struck out the following batter Franklin Ninete while still preserving their 5-3 lead. Tenorio would draw a walk on a full count to load the bases for Joaqin Lujan. Lujan was the man responsible for tying the game in the 4th inning with a two-run single.

“When I hit that shot to the gap I knew I was bringing in runs for the boys. It’s not only for me, it’s all my teammates. They all cheer us on in the dugout and tell us to keep pushing,” said Lujan on his scoring play in the 4th.

Lujan would get another shot to make an impact and his at bat in the 10th would prove vital.

Lujan would hit a bouncing ball that found its way between first and second for a base hit, allowing Tedtaotao to score to bring his team within one, down 5-4.

“That was a huge play. I was happy that I finally hit the ball to the right spot, but it was [Aiden] that brought the whole thing home for us,” said Lujan on his at bat.

Gumataotao would then step up to the plate, unloading his heroic shot deep left to win the game.

“We’re very tired right now but I know that if I didn’t put out for my team then no one else was going to do it. I had to be there for them somehow,” said the exhausted catcher.

With the game tied at three runs for majority of the contest, neither team was willing to budge in the extra innings as each side came through with big defensive plays to keep the action rolling.

GW had a grand shot to win the game in the bottom of the 7th with the bases loaded and just one out away. ND’s Nolan Cruz would strike out Gecko Jonah Peredo for the teams second out with the pressure mounting.

ND would retire Nolan to bring in Terlaje with the MVP Tedtaotao up to bat. Tedtaotao got a good lick on a shot down the center, but ND’s Dominic Cruz would make a great grab to get the out at second base to force an 8th inning.

GW’s Peredo would put two Royal batters on base after hit by pitches before the team retired Peredo for Pangelinan. With one out away and the bases loaded, GW would pull of a terrific double-play to end the inning. The outfield would grab Royal Ricardo Leon Guerrero’s shot down the center while flipping the ball to second base before ND’s Noah Peredo could get back to the bag for the double-play.

Terlaje would keep the Geckos away from the plate after striking out two batters while allowing just one hit in the 8th inning.

The Royals were in the midst of a two-out rally in the 9th inning after Terlaje got a base on balls. Terlaje would steal his way to third with Dominic Cruz up to bat. Pangelinan would strike out Cruz to preserve another scoreless inning, his third strikeout of the evening.

ND’s defense would hold down the Geckos, three up three down, to send the game into the wild 10th inning.