ISLANDERS LEAN ON BLAS, MOLO IN WIN OVER SHARKS

The JFK Islanders made key 4th quarter plays behind a pair of underclassmen to get their second win of the season. 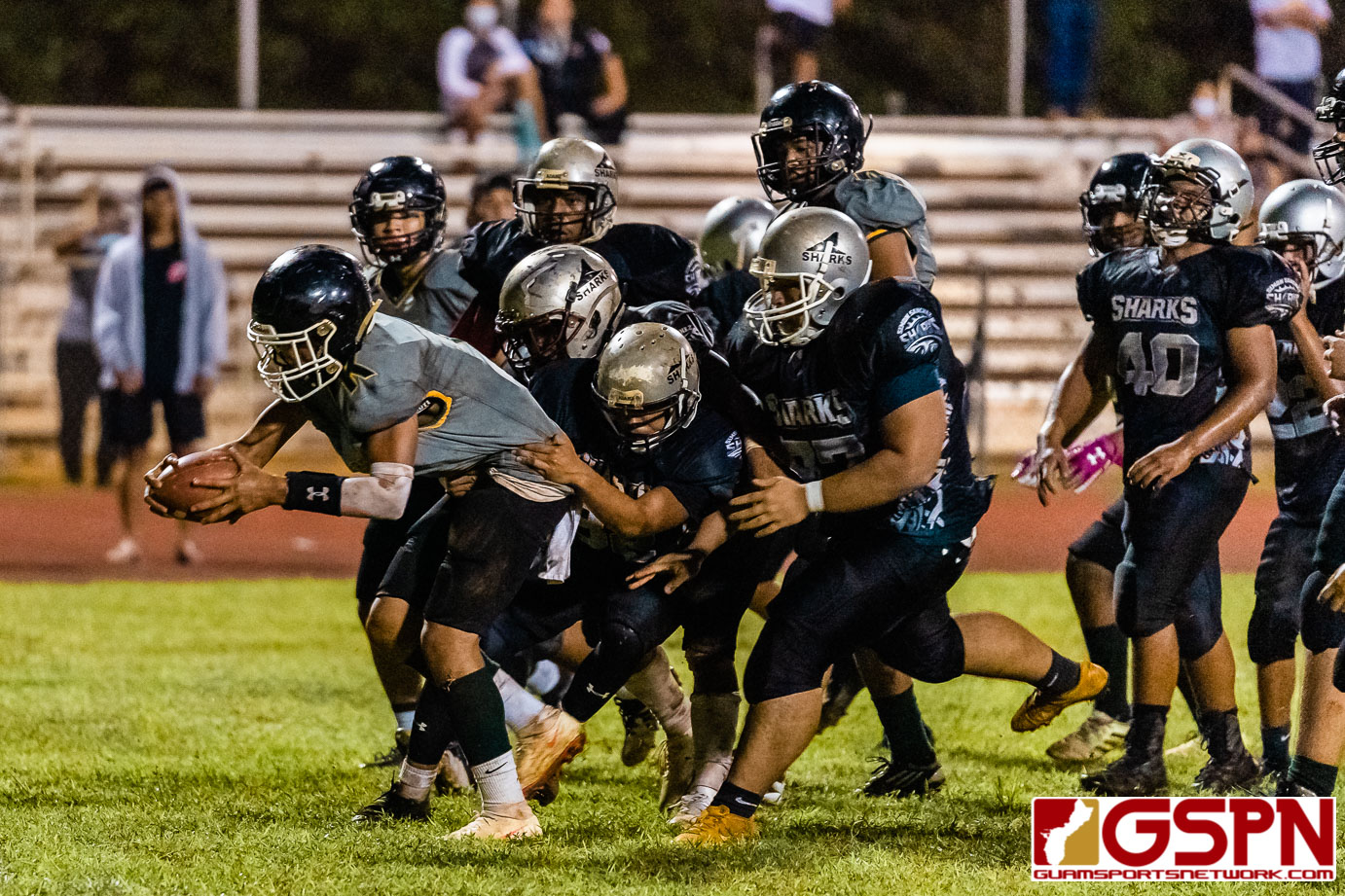 The JFK Islanders showed poise, relying on a pair of underclassmen in crunch time in their 22-14 victory over the Sanchez Sharks Saturday evening to improve to 2-2 on the season.

Islanders freshman quarterback Trey Blas, sophomore running back Jermaine Molo and junior Irvin White provided the three touchdowns for JFK as they managed to hold down the dangerous Sharks run game in the 4th quarter.

With the game knotted at 14, JFK would put together a scoring drive in the 4th quarter to take the lead. Blas would connect with White on a 4th-and-5 pass and catch at the Sanchez 15 on a short throw towards the sideline. White caught the pass two yards short of the first down, but eluded a diving Shark defender to get the ball to the seven yard line for a fresh set of downs. Molo would pound the ball to the goal line, setting up a run-in by White to take a 20-14 lead.

“That’s one of our main plays. I looked down field and no one was open, but then I saw White and hit him. He just took the ball and did this thing,” said Blas on the key 4th down conversion.

Blas would convert on the 2-point conversion to further the lead 22-14.

On the ensuing drive, the Sharks used a run heavy approach behind Adin Lumba and Jonathan Sablan to convert three straight first downs to get into Islander territory. Lumba would get injured on a medium gain which derailed the Sharks momentum on their final drive. Two running plays on 3rd and 4th down resulted in a turnover on downs at the JFK 30, giving the Islanders the ball and the lead.

JFK put the ball in Molo’s hands, who converted on a 3rd-and-2 to end the game with Sanchez unable to stop the clock being out of timeouts.

“I told coach I want the ball, give me the ball, I’ve been making plays all day,” said Molo on putting the game away. “In my head I was thinking, are we really going to win?,” joked Molo.

Sanchez struck first blood in the game with two big runs resulting in the teams first score. Sablan would break loose for 28 yards, followed by a 25-yard touchdown run by Lumba for an 8-0 lead with Lumba also scoring the 2-point conversion.

JFK responded by marching down the field behind a series of toss plays to White to get them in the red zone. Once there, Blas would appear to throw his first touchdown of the season on a pass to White, but a flag on the play would negate the score. Blas then took matters into his own hands by running in his teams first score from nine yards out, but a failed PAT would leave the lead to the Sharks 8-6.

The Islanders started to open up the passing game in the second half with Blas connecting with receiver Keenan Taijeron for 23 yards to get into Sharks territory.

“Our coaches started seeing more stuff on the defense, like how the safeties started separating and backing up more, and that’s just one of our strengths, our passing game,” said Blas on throwing the ball in the second half.

“I definitely did not [expect that],” said Molo on getting the ball four straight times. “Our blockers did amazing. I was only able to get those yards because of my blockers. It feels great, I’ve been waiting for that touchdown.”

Lumba didn’t allow the Islanders to enjoy their lead very long, gashing the defense on a 35-yard score to tie the game at 14.

The Islanders played patient with the game tied, relying on Blas, Molo and White to produce what would be the game-winning score.

“We lost last week so we came into practice working hard this week and I feel like we showcased our skills this game,” said Blas.