After a stellar debut, Guam’s Trevin Jones is ready to tackle his second UFC fight. 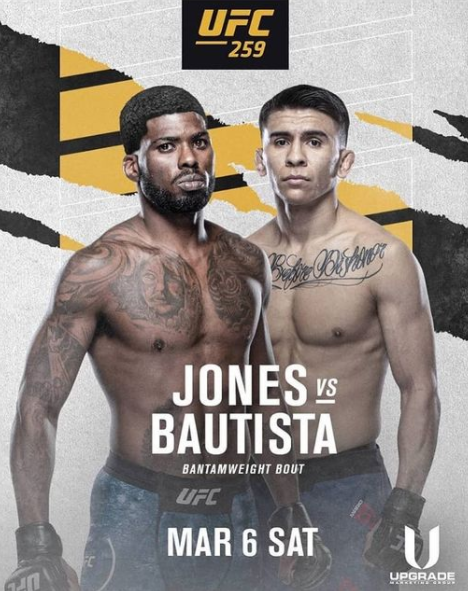 Last August, decorated Guam MMA fighter Trevin ‘5 Star’ Jones got a last-minute call from the UFC to make his debut against Timur Valiev. After cutting 17 pounds in 36 hours, Jones made his debut and won a stunning comeback knockout victory.

Guam fans congratulated Jones after scoring the biggest win in his career, a victory which earned him a 50K fight bonus. Jones, a PXC alumni, is now scheduled his next UFC fight which just so happens to be a couple of weeks away.

Jones accomplished his goal of making it to the big stage joining the elite Guam group of Jon Tuck, Jon Delos Reyes, Frank Camacho and Roque Martinez. On March 6th, the island will be tuning in to witness Jones’ second fight on the biggest fight card of the year – UFC 259.

‘5 Star’ has gotten that first fight experience and moves on to his next challenge: Mario Bautista. Bautista replaces Jones’ original opponent Randy Costa who was unable to compete. Bautista (8-1) is on a two fight UFC winning streak and has not fought since February 2020. Bautista’s eight victories consist of three KO’s, three Submission and two decisions.

“This is different from my last fight fights actually which were anywhere from 20 days to 2 days’ notice,” said Jones. “This fight I had a full camp to prepare so expect to see a different Trevin Jones.”

Jones will be on an epic UFC 259 fight card featuring three title fights. Here is the proposed card as of Feb 23rd

Jones said the late change in opponent will not have influence on his training or mindset.

“I’m 75 percent focused on my game, not theirs. I made a few adjustments but not much. I will not be the same Trevin Jones as any of my fights – I’m a new fighter completely,” said Jones.

Jones has been travelling back and forth from Guam and Las Vegas for fights and training. While in Vegas, Jones said he is working at Zenith headquarters Robert Drysdale jiu-jitsu, Xtreme Couture MMA. Back at home, Jones trains at Vida BJJ, Guam Muay Thai, Inspired Fitness, Custom Fitness and Spike 22.

“To my Guam fans- thank you for all the love and support; March 6th is our night… GU LET’S GET IT!”

Start the barbecue early Guam, prelim fights start at 9am! Fights can be purchased via pay-per-view on ESPN+.