The St. John’s Knights and Academy Cougars put on an electrifying battle Tuesday evening that went as many sets as a high school game could. 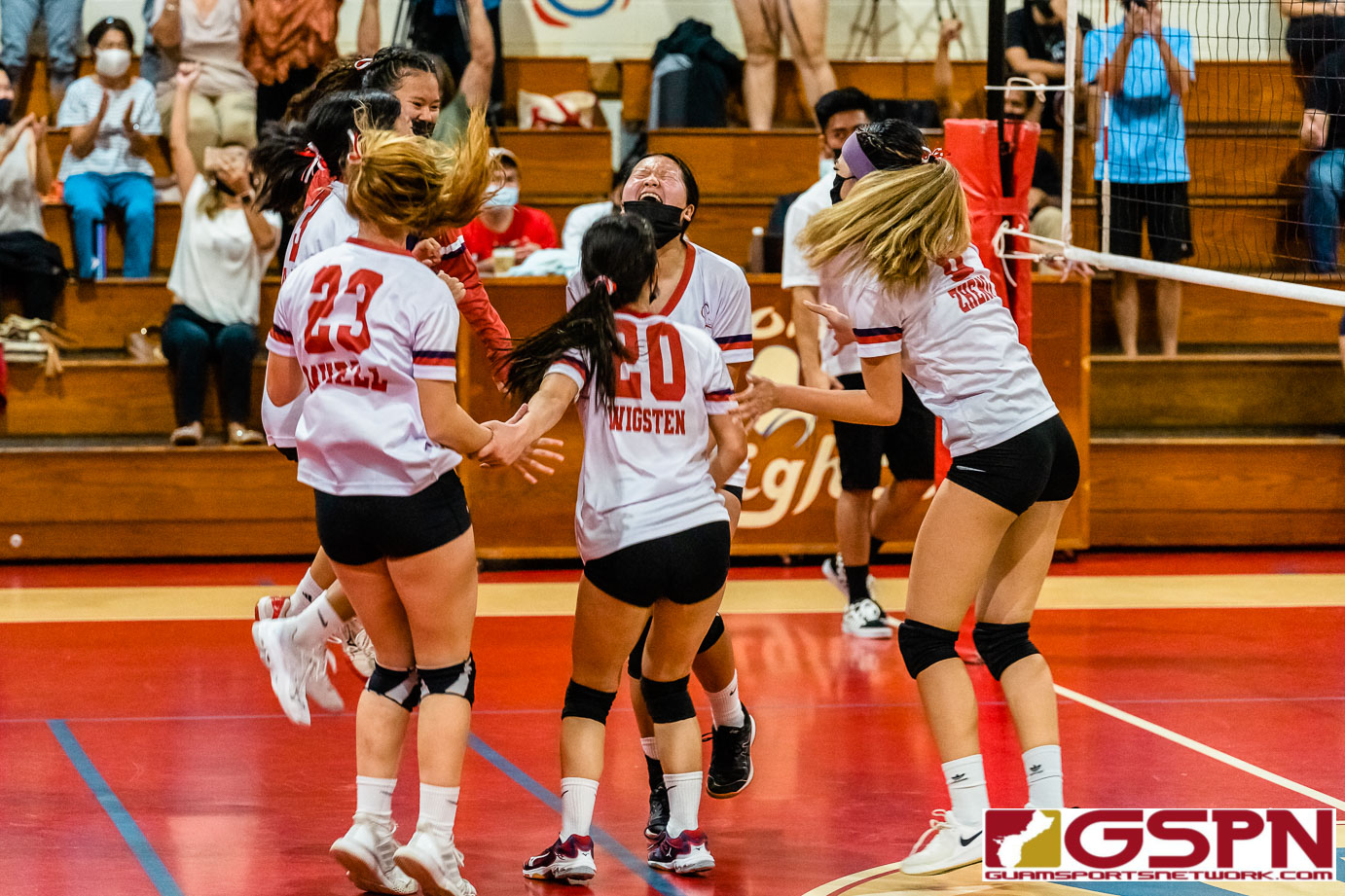 The St. John’s Knights had their unbeaten record in jeopardy Tuesday evening as they battled the visiting Academy Cougars to a thrilling five-set game. Behind strong plays from their senior hitters, the Knights squeezed out the win 25-14, 21-25, 19-25, 25-21, 15-9.

Fans inside the Knights gym were treated to a roller-coaster of a game where the Knights went from dominating the opening set, falling behind 2-1 in sets and then winning the last two to stay unbeaten.

Leading the way for the Knights were hitters Kaia Malakooti who had 13 kills and Jadyn Palomares with 11. Middle blocker Wendy Zheng also had 12 kills to round out a big night for the Knights front line, orchestrated by the young setter Ella Wigsten.

“Though we started off strong, our mentality dropped because we thought we were going to win easy [after the first set], but obviously Academy is a great team and we shouldn’t have let that happen, but I’m glad to have gotten the victory today,” said Knights Palomares on the flow of the game.

Both teams were fighting closely in the 5th with the lead trading three different times early on. St. John’s would use a 4-0 run down 6-4, capped off by a Palomares kill to take an 8-4 led. A rolling kill off the net from Knights Lane Murrell would get the Knights up 11-6 forcing a Cougar timeout.

Melanie Damian would give the Cougars two kills with their backs against the wall down 14-9, but Palomares would have the final say as she fired off a bigshot towards the left-side of the defense for the match point.

The Cougars might only have one win on the season at 1-5, but they’ve been highly competitive in each of their losses. As the Cougars prepare for their second go-around of the league before the playoffs, even the unbeaten Knights aren’t taking anyone, especially the Cougars, lightly from here on out.

“Every game we go into we can’t ever doubt the team [we’re against]. We have to give it our all every time. They came in here and showed us that every team has potential so never doubt each other,” said Malakooti.

The Cougar attack came furious in the 2nd set behind team kill leaders Sophia Kelly and Gabriella Mata. Kelly would score five of her 11 total kills in the set while Mata added four of her nine total.

The 3rd set was dominated by the serving of Cougars Melanie Damian and crafty play of setter Jeana Reyes, where both ladies had two aces in the set while Reyes worked the ball around with five different Cougars getting kills.

Heading into the 4th set, the Knights hit the reset button.

“The mentality of ‘one point at a time’ will take you further than you think and that was definitely our mindset,” said Malakooti.

Zheng started hot in the 4th scoring three of her teams first four points off kills for a quick 4-0 lead. Malakooti would score on back-to-back kills, followed by a Palomares kill, to put the Knights up 8-4 with majority of their points coming off hits. Down 23-17 in the 4th the Cougars clawed back behind a kill from Kelly, an ace from Reyes and a block from Sadie Gutierrez in succession to get as close as 23-20. The Knights recollected themselves ending the set on an ace from libero Yasmeen Lopez.

The 5th set was close early, but the Knights took control of the game with Lopez doing plenty of backline diving that would eventually set up her hitters to close out the game.

Palomares echoed what Malakooti had previously mentioned about taking the game point-by-point, which helped them mentally down the stretch.

“Not giving up and taking each point at a time. If we looked at the score and focused too far ahead, we’d not be able to live in the moment so we took it one point at a time.”