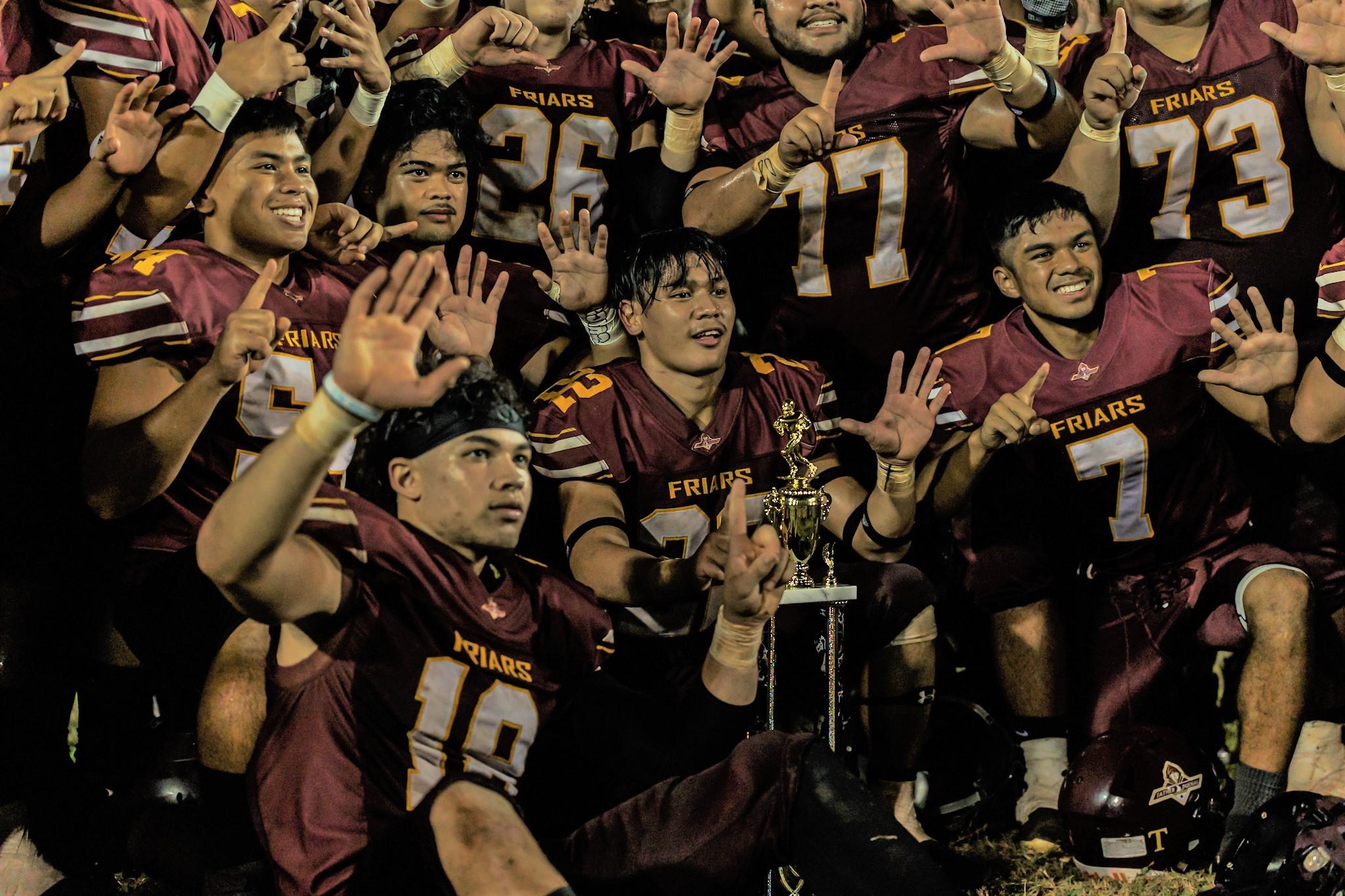 The FD Friars are you ISA Football Champions after defeating the Guam High Panthers 26-8 for their 6th straight title, extending their win streak to 57 games! Watch the recap of the live broadcast along with the write up below!

The dynasty continues. The FD Friars made it six straight high school football championships after defeating the Guam High Panthers 26-8 at the GW Field on Saturday night.

The Friar winning streak is still alive with 57 straight games behind the leadership of coaches Bruce Meno and Keone Badua.

The FD defense held the explosive Guam High offense to one touchdown; keeping their legacy alive. FD senior running back and ISA league offensive Co-MVP Caiyle Gogue had 218 total yards on offense; 196 rushing yards on 24 carries and 22 receiving yards to anchor the offense for the Friars.

“I was hungry coming into this game because I didn’t have a good game against them (during the regular season),” said Gogue.

Gogue was stopped during their first meeting and left the game due to an injury. The Friars came back to win their first contest 17-7 back in the third game of the season.

Sojo has a big first half

The Friars scored on their opening drive with quarterback/kicker Alex Sojo making a 27-yard field goal to go up 3-0. Sojo would connect with freshman Daethan Alcantara on a 46-yard touchdown to go ahead 9-0 by halftime. Alcantara took a perfect slant pass, fought off a defender and raised to the left corner of the end zone that fired up the FD crowd.

Gogue continued to pick up yardage after halftime with an 11-yard rushing touchdown to go ahead 16-0 in the third quarter.

The Panthers found the end zone for the first time with quarterback and offensive Co-MVP Aaron Johnson connecting with Charles Ellis for a 20-yard touchdown. The two-point conversion, a rush play by Johnson, had the Panthers within a score 16-8.

Gogue continued to pick up yardage and the Friars entered the red zone once again. The Panthers got a key stop on 3rd down by Avery Gamboa which forced the Friars to kick a field goal. The kick went between the uprights for Sojo and the Friars had some cushion, going ahead 19-8 entering the fourth quarter.

A key sack shared by FD’s Vance Meno and Evan Brown forced the Panthers to punt with six minutes left in regulation.  Gogue picked up more yardage, which set up a 1-yard power run by Vance Meno and the Friars started celebrating as they went ahead 26-8.

“We’ve been in the lab for the past week going over every scheme and formation we had to cover. We did a good job executing and it showed on the field tonight,” said Brown.

Brown had a game-high 10 tackles and half a sack.

The future is bright for the Friars with underclassmen Alcantara connecting with Sojo in a big play that gave confidence to the Friars squad in the first half.

“I honestly thought I was going to get tackled, but I just sprinted and got the touchdown. The goal next year is to get seven, I’m going to do my best to get better,” said Alcantara.

Sojo, a sophomore, came up huge in pressure situations with his passes and field goal conversions.

“Coach always tells us ‘no pressure, no diamonds’. I just did what we practiced,” said Sojo.

Sojo’s field goal in the fourth quarter made the game a two possession contest; the Friar defense did the rest to preserve the dynasty.

Sojo had two field goals and threw for 67 yards. Vance Meno rushed twice for seven yards and a touchdown. Alcantara had one touchdown reception for 46 yards.

Guam High running back DeShawn Baird rushed 17 times for 64 yards. Alex Gallego rushed for 49 yards; Johnson had 38 yards on the ground. Ellis had the lone reception for Guam High, a 20 yard touchdown.

FD’s Brown had 10 tackles and shared a sack with Meno who collected seven tackles on defense. Isaiha Arriola and Caleb Murphy each had 4.5 tackles; Tristan Burgos had a sack for the Friars.

“The boys worked hard for the last seven months for this. We had a delay (because of covid) but they continued to stay disciplined and overcame all the obstacles from this pandemic,” said Friar head coach Bruce Meno.

The quest for a seventh straight championship for the Friars will not be easy with Guam High retaining more than a dozen returnees.

Johnson, a sophomore, showed his explosiveness in a fourth-and-long situation for a first down. Expect the Panthers, the third place Southern Dolphins and the GW Geckos to come strong next season.