Guam Basketball’s Brent Tipton will be leaving the island for an assistant coaching opportunity for the U19 team in Germany. 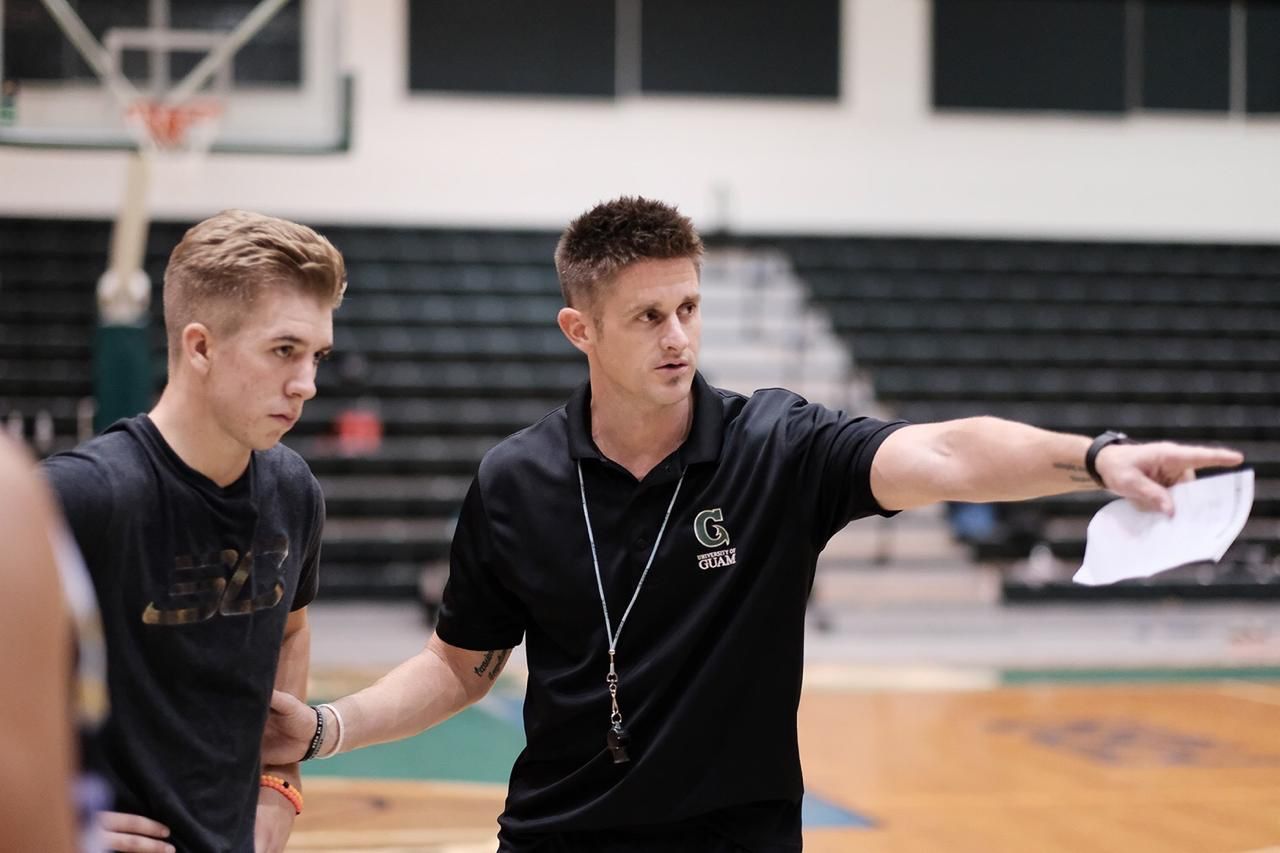 After 14 years on Guam, National Basketball Coach Brent Tipton will be leaving the island this month to pursue a dream. The island had become home to the Tipton family, but a dream opportunity came knocking at their family’s doorstep and they’re about to take that leap of faith for a career both he and his wife have passion for.

Brent will be assisting coach the U19 Porsche Basketball Academy program in Germany, which is a feeder program into the countries pro basketball circuit, the BBL. Brent’s wife Katy got the job she had applied for over five years ago, which will give her a chance to further her career as an ESL (English as a Second Language) Teacher.

Germany wasn’t Brent’s initial landing spot after going through interviews back in December for coaching jobs in Australia where he finally landed a hire on Basketball Tasmania in the first week of June. But a week later, Katy would get the call from Germany landing the dream job of her own. Brent weighed the opportunities and ultimately decided Germany would be the next best spot for his family to establish roots given the career opportunity for his wife Katy and the schooling that would be provided for their son Soren.

Brent had already built up a strong basketball resume of coaching and sent his name out quickly looking for opportunities in Germany. He would get reacclimated with a former organization, the Porsche Basketball Academy in Ludwigsburg, who offered Brent the chance to work with their U19 program, an age group that he’s spent most of his coaching career on Guam with.

“My heart is with that age group. I have core values of coaching that I always instill. I want to be transformational, I not only want to know what makes my players tick, I want to know what makes them talk. If I don’t get to build a relationship then I can’t reach that athlete. I want to holistically build the athlete from the social, emotional, technical and tactical. The last core value is having a growth mindset. They’re still learning about themselves and making character choices, and they need to know that making mistakes are how they’re going to learn and they have to be okay with that mistake,” said Tipton.

The current head coach of the team is David McCray, who spent 15 years in the BBL and eight years in MHP Riesen. Tipton has nine years of international coaching experience and the recommendations that the team was given about him allowed Porsche Basketball Academy to put trust in him.

“I was honestly only seeking a volunteer position, but that has advanced into an assistant position. You can tell that they are very invested in this program and they have a tremendous vision to get these young men ready to play at the pro level,” said Tipton.

check out Brent being featured on the Hoop Heads Podcast below:

Picking up the passion

Tipton started his coaching journey in 2009 as head coach of the Harvest Eagles boys team. Fast forward to 2021, Tipton had got involved coaching a handful of high school programs, assistant coaching jobs on Guam’s National teams for both men and women, head coach of the UOG Tritons while even extending his basketball involvement with the Basketball Embassy Regional Director for Asia/Oceania.

Brent learned the most of his coaching prowess from the late Tony Thompson, the newly retired National coach Eddie Pelkey, former National coach Sid Guzman and current work horse Reggie Guerrero, who assisted Brent when coaching with the U18 team and UOG.

“There’s so many good coaches that are impacting athletes here on island and the thing I’m grateful for is being able to leave an impact as well. I would not count myself more accomplished than anyone on Guam. I haven’t done anything more special, but what I am thankful for is the mentorship,” said Tipton.

As much as Brent has learned on island, one of the biggest motivational factors to pursue a career in coaching was exposing himself to different levels of coaching all around the world.

Tipton also explained that there is no one correct way to coach and every situation is different, but through his core values and the experience he will gain through coaching overseas, he’s one day hoping to be considered for head coaching jobs at the pro levels.

Former National coach Eddie Pelkey took Brent under his wing back in 2014 when Guam competed in the Micro Games in Pohnpei. The two have shared a great relationship since then and Pelkey couldn’t be happier for his former colleague with the new opportunity he’s being given in Germany.

“Brent is a true student of the game. He started out learning under some of Guam’s best coaches, and has evolved into investing into himself and studying under some great people and programs abroad. His passion for teaching basketball is undeniable, and it is really unfortunate he was never given a real opportunity to own and develop kids through a program that was not the national team. Guam is losing an excellent, underrated basketball coach and person. I’m going to miss him, Katy and Soren, but believe he will do great things in Europe. Lots of respect for him to take this leap and trust his ability,” said Pelkey.

The Tipton family arrived on Guam when Brent was only 21 years old. After 14 years, the island has become so much of a home to them that when asked where they’re from, they simply answer “We’re from Guam,” which is why leaving in mid September is going to be very emotional.

“Guam has given my family an incredible opportunity to grow. Sure, we’ve made mistakes, but we’ve also learned, and it’s helped prepare me for the relationships that I’m about to build in our next step of life. A lot of our heart and roots are here which is why It’s going to be incredibly hard to leave,” said Brent.

Brent’s philosophy about establishing roots is a mindset he’s going embrace while on his new journey, though he’ll never forget Guam and the place he called home.

“The best time to plant a tree was 20 years ago and the second best time is now… With change comes uncomfortability, but it also comes with growth. It’ll be a stretch of our capabilities, but we’ll grow to the type of people we want to be,” said Brent.

The door to return to the island will never be closed for the Tipton family as he’ll forever consider Guam his home.

“I don’t know how people don’t love Guam, military and non-military, how can you not love Guam. We wanted to be considered from Guam and we tell people who ask that we’re from Guam. We get frustrated when we hear people didn’t love it here as much as we did. Guam is deeper in our hearts than the average person. We’ve loved our time here and we’ll always consider Guam our home.”

While coaching at Southern, Brent got the opportunity to learn under one of Guam’s best in Sid Guzman, who was the perennial head coach of the Women’s National Team in the early 2000’s. Guzman left a heartfelt tale of Brent:

It is extremely difficult to put into a few words a description of a person, especially one as special as Brent but that’s where we should start. From the moment I first met him when he came out to a Guam Basketball workout on the referral of a colleague who worked with him at Harvest and played for me on the Miller lite team, I remember how humble he was. He would come out daily to practice and give his best effort, try to improve, and was a joy to Coach and be around. This all in spite of being in a new environment, around new team mates, a new culture, and around new ethnicities. He never had a negative attitude throughout the years we progressed both as players and coaches.

Fast forward a few years later to our time together on the bench and I can say Humble and Passionate are the two distinct words I could use to describe his particular style. He had an old soul for a young guy as far as his philosophical views on Basketball and believed as I did that fundamentally each player deserved an opportunity to compete, develop, and grow and it was our jobs to cultivate that and help each and every one of them to reach their potential and goals. How hard you work as a player would translate into how successful you could be on the court. This applied also to Coaching and no-one worked harder than us back then.

In closing, I am sad to hear that he is leaving the island but grateful to know that he leaves having touched the lives of thousands of kids and adults over the time he spent on Guam. His contributions to the sport, community, and his players will be felt for years to come. He will be sorely missed but his spirit, passion, and selflessness should be always remembered and our island is the benefactor for having him, Katy, and their children spend part of their lives with Guam. We can all offer them our sincerest Si Yu’os Ma’ase yan Hu guaiya hao as they venture into their new chapter in life.

• Signed first ever-recruiting class for University of Guam’s Men’s Basketball team in 2017 with players from US Main-land and Guam.

• Assistant Director of The Basketball Embassy’s annual international camp in San Antonio, Texas
• FIBA Europe Youth Development Project- Botevgrad, Bulgaria —Served as instructor for camp that consisted of 60 of the top U15 players in the country of Bulgaria and served as the selection process for the county’s U15 National team to compete in the European Championships
• International Basketball Camp- Gabrovo, Bulgaria—Led group development sessions of more than 350 players ages U10 to U18 focusing on the fundamentals of individual technique and team tactics

• Stomart Basketball Club-Iasi, Romania—Assistant Director for the week long camp focusing on teaching the fundamentals of the game in both individual technique and team tactics

• Camp Pass-It-On- Istanbul, Turkey—Represented Guam with 70 other countries in attendance. Recruited and accompanied two 14- year old Guam national players (one male, one female) to participate in Camp Pass It On
• University of Texas-San Antonio Youth Basketball Camp—Instructed daily stations and coached the campers in 5on5 format.
• Illo Illo Children’s Hospitable-Illo Illo, Phillipines–Conducted a basketball clinic for children in the city of Illo Illo, Philippines in partnership with the Children’s Hospitable.

• Led sessions that taught the fundamental details of individual technique and team tactics to U16, U17, and U18 players.
• Developed a system of play to enhance player comprehension and skill acquisition of technique and tactics
• Conducted 3-5 training sessions a week to create a habit of play to correspond with the player’s individual needs.
• Coordinated and directed player development camps .
• Coordinated day-to-day operations and practices.

• Consulted coaches with feedback on their home work task for their FIBA Level 1 accreditation.