VOLLEYBALL ALL-STARS PUT ON A SHOW 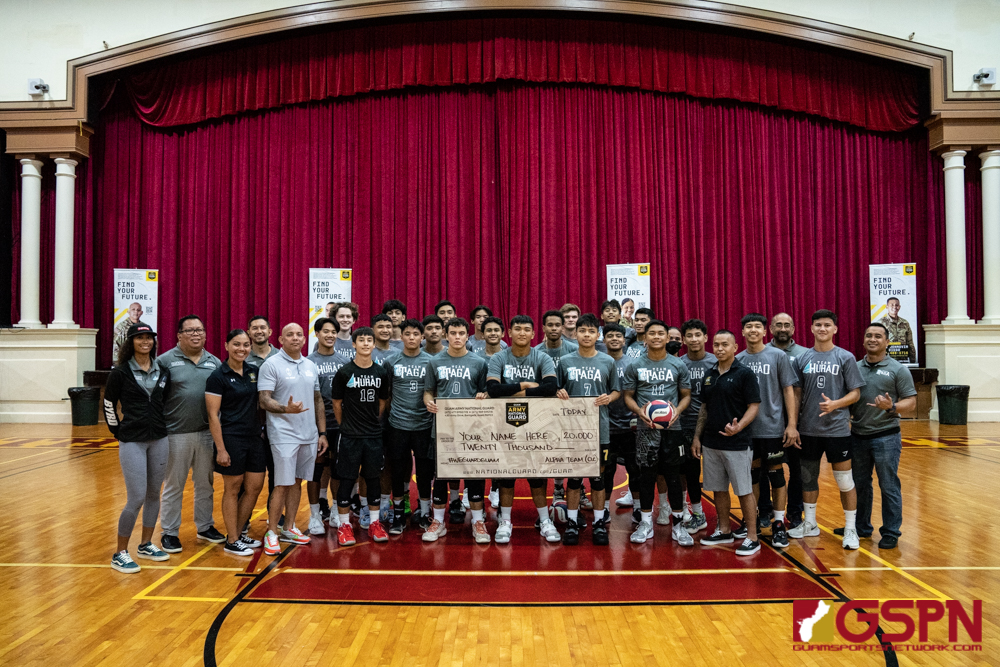 The stars shined on Sunday night as a full crowd was treated to a show at the 2022 GSPN Boys All-Star Volleyball Game presented by the Guam Army National Guard. All-Island selections from both the ISA and IIAAG leagues gathered at the FD Phoenix Center.

Taga’s VJ Rosario had five kills and an ace and was named the game’s MVP. “It was exciting to be out there with the best of the best from both leagues,” said Rosario from Tiyan. “We were so hyped for this game and I’m just glad representatives from all schools could gather together on one court.”

“It was a surreal feeling to be a part of this. It’s my first year of playing volleyball so I’m excited and also a bit nervous at the same time,” said GAA’s Kana Sgambelluri.

JFK’s Mark Morales celebrated his birthday on Sunday and although his team (Hurao) did not get the win, he was grateful for the experience. “Volleyball is a game I love and spending my birthday here, playing on this court, is like a gift for me.”

Pangelinan’s Taga squad kept it clean and the Hurao team committed some untimely unforced errors which enabled them to tie the game at 23-23.

2nd set
Taga established an 18-12 lead with IIAAG MVP Wes Keith (Harvest) and Rosario finding success on the offensive side. Pangelinan had the luxury of drafting both MVP’s on his squad and they came up huge under the spotlight.

Rosario served up an offspeed, untouched ace and Leiland Gumabon (GW) served the final point for Taga and they took a lobsided second set 25-15. “During practices, this team established a good relationship and I like the vibe,” said Gumabon.

3rd set
Ethan Alvarez (FD) ignited team Hurao with two kills and an ace to go ahead 15-9. Gabriel Sarmiento (FD) and Xander Duenas (Tiyan) helped Taga go on a run and tie the game at 23-23.

After an errant serve by Sarmiento, Alvarez went to the line for Hurao and served a gem of an ace to end the set, Hurao winning 25-23. Alvarez, a junior, denied the Taga team from winning in straight sets. It seemed the team fed off of his momentum and finally pulled through during crunch time.

4th set
The fourth set was a crowd pleaser with long volleys and the game went back and forth, tied 16-16.

Taga took the lead with Keith and Duenas recording kills to go up 18-16. Alvarez from Team Hurao answered emphatically with three kills and another ace to go ahead 22-20.

Duenas answered with a kill and an ace from the service line of his own and suddenly Taga is was up 23-22. Immediately after serving the ace, Duenas committed a costly service error and the game was tied 23-23.

Rosario put the Taga squad on top with a kill. With their backs against the ropes, Buekis set up Gerald Malana (Tiyan) for a kill on the left side and the game went into a deuce at 24-24.

Team Taga’s Ducky Jackson (St. Paul) blocked Hurao’s Malana to go up 25-24 putting his team on a match-point situation once again. On the next play, Taga’s Rosario delivered a difficult serve and Taga was on the offensive after a free ball return. The set went to Keith on the left side and he found an open spot. Game, Set, Match – Taga 26-24 with the crowd cheering on the efforts of both teams.

“When I saw the set go towards Wes, I got chills because I know he could end this. My respect to him for that,” said Rosario. Keith led Taga with six kills.

Hurao’s Alvarez put up a huge performance in a losing effort with a game-high 10 kills and seven aces. “This game presents a huge challenge on how far you come. It’s hard to make an all-star team so just being around these guys tested me as a player and I can’t be more grateful,” said Alvarez.

Another Hurao player put up some numbers with Malana recording seven kills. “It was fun playing against my teammates (from Tiyan), there was a lot of friendly trash talking. It was really exciting and it was a good game,” said Malana.

All PHOTOS BY BOUT IT PRODUCTIONS