Running attack too much in Metgot showdown 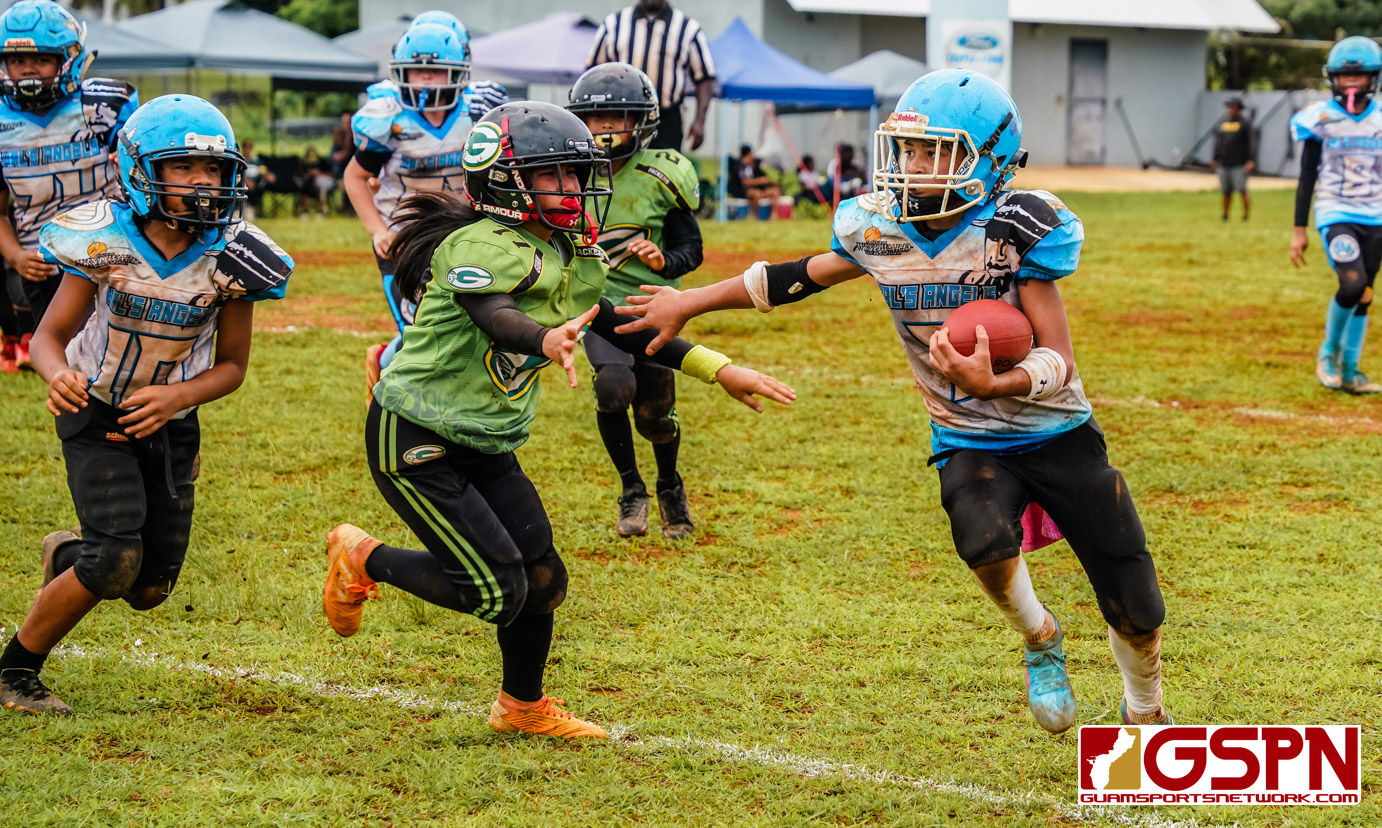 The big Metgot Showdown proved who currently is the best amongst the 10-12 year olds in the 2022 Triple J Ford GNYFF League.

The running attack by the Hal’s Angels made all the difference as they beat the Guam Packers 27-7 Saturday afternoon at Hal Shiroma Field.

Both teams came in as the last remaining unbeaten teams in the division with the Packers at 6-0 and the Angels at 5-0.

Justice Alcantara and Kaden Medler did most of the damage for the Angels with Alcantara rushing for two touchdowns and over 100 yards.

“We have two really good running backs, plus others,” interim head coach Buzzy Shiroma said. “Our game plan was to even out the attack with fresh legs and wear out the defense.”

The Angels started things off right off the bat when Noah Cruz scooped up the opening onside kick and took it to the house for the fast score. Jayce Sablan punched in the PAT for a sudden 7-0 lead.

After a quick hold on defense, the Angels offense marched to a methodical 12-play drive that reached into the second quarter and was capped off by Alcantara’s first score, an 18-yard untouched off tackle jaunt. A flat pass from Apollo Moylan to Medler for the PAT made it 14-0.

The Packers would drive deep into Angels territory after some tough running from Johnnie Brub and Sahi Santos, but the Angels defense would come up with a big stop at their own 11 yard line.

On the very next play, Alcantara took the handoff right, bounced outside and was off and running to an 89-yard sprint down the sidelines. The PAT was no good but the Angels were looking good 20-0 heading into halftime.

With their backs against the wall, the Packers came out with a sense of urgency. Seeing that the Angels were clogging the outside lanes, Santos went up the gut for a 43-yard score to put the Packers on the board. Tavion Apatang found Champion Hawkins for the PAT and a 20-7 score.

The Packers recovered the ensuing onside kick to keep the momentum. Facing a 4th-and-24 situation, the Packers completed an Apatang-to-Hawkins pass that went 23.5 yards to the Angels 9-yard line, just shy of the first down.

“We were definitely scared about that comeback. The Packers are a good team over there with some real good talent. They were running over some of our players.”

The Angels then turned to Medler in the next drive as he single-handedly drove downfield and capped it off with a 4-yard dive into the left end zone. A reverse play by Sablan sealed the scoring at 27-7. Sablan also came up with some big defensive stops behind the line of scrimmage.

The big win leaves the Angels atop the division at 6-0 with two more regular season games to go before the top four teams advance to the semifinals.

The first half was a tight one as the Angels taking a 16-12 lead at halftime with the difference coming from a pair of two-point PAT kicks from Jhordan Lujan.

The Angels added two touchdowns in the second half from Reiko Mendiola and Justin ‘Bubby’ Sablan while their defense shut out the Packers to take the win 28-12.

With the Angels improving to 6-0, the Guahan Eagles look to match that record on Sunday against the Raiders. If both teams win next weekend, it will set up a Matua showdown in the final weekend of the regular season between the Angels and Eagles.