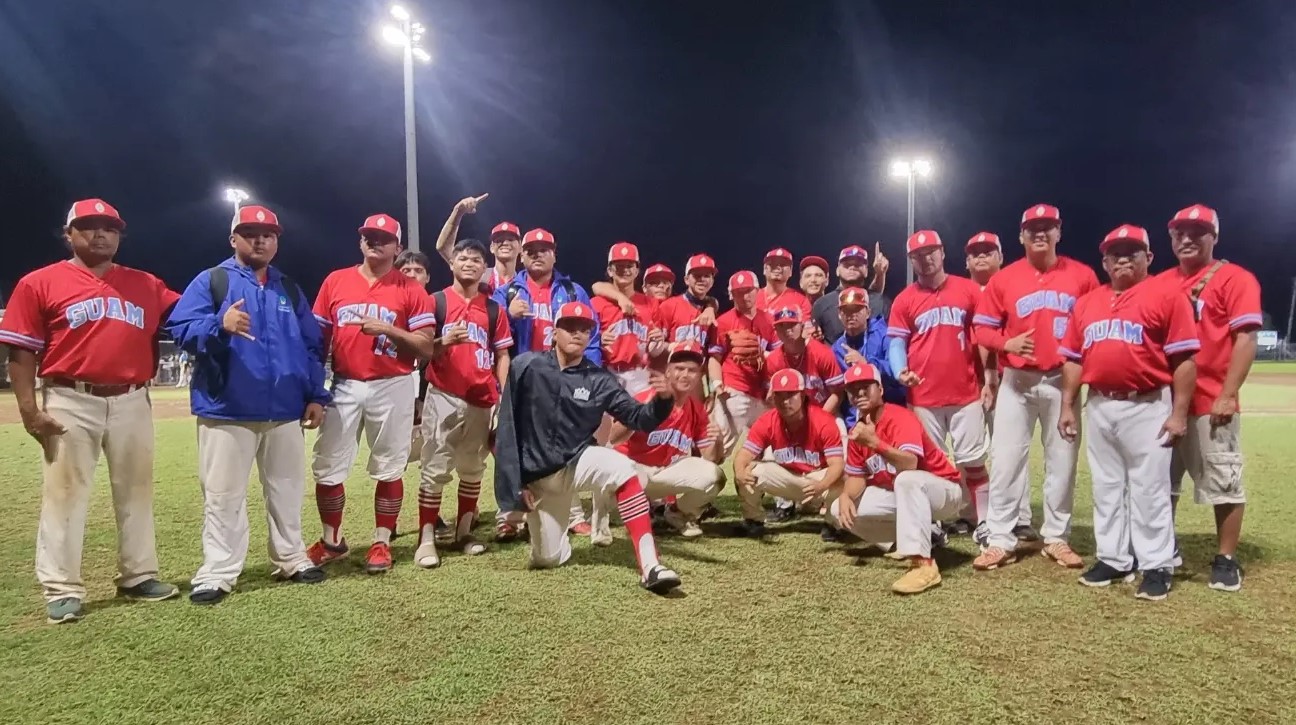 After beating the previously undefeated Palau team 7-2, Team Guam shook up the rankings. Guam leapfrogged ahead of Palau and the CNMI for the top slot heading into the semifinals.

The victory was critical because it guarantees Guam at least a bronze medal. But the young Nationals will not be looking for a bronze when a gold medal is within their reach.

The victory forced a three-way tie for first place with Guam, Palau and the CNMI all with 3-1 identical records in pool play. The runs-scored differential enabled Guam to secure the top seed. Palau is now the second seed and the CNMI drops to third.

Guam explodes in the 1st inning
Guam scored six runs in the first inning and established the tone early against the undefeated team.

Ashton Tedtaotao had a two-run double in the top of the first to give Guam the early momentum.

A base hit by Sean Egenias advanced Tedtaotao to third base. Tedtaotao later scored after a wild pitch to put Guam ahead 3-0.

Guam continued to tee off with Javen Pangelinan recording a base hit and John Salas Jr. doubling to score Egenias to go ahead 4-0.

Shane Muna recorded a fielders choice RBI and Brian Balajadia lined a shot to left to bring in Salas Jr. to put Guam up 6-0 after the first inning.

Starting pitcher Franklin Ninete Jr. had good defense behind him but some control issues in the second inning, allowing Palau to score via base on balls for a 6-1 score.

“Coach (Joe Tuquero) reminded me to keep my focus, settle down and stay ahead in the count,” said Ninete Jr.

Ninete Jr. gained his composure and recorded two strikeouts to hold the Palau team scoreless in the third and fourth innings.

Palau recorded their first base hit and scored a run in the bottom of the fifth inning to make it 6-2.

Guam answered with an insurance run in the top of the sixth inning with Jathan Muna-Burnes driving in Shane Muna via sacrifice ground out to go up 7-2.

In the seventh and final inning, Guaifon Terlaje came in for relief and struck out two batters to end the game.

“There were some nervousness leading up to the game. But right before we started I had to flip that switch and turn it into game mode,” said winning pitcher Ninete Jr.

“We played them in Palau for a friendship tournament and they beat us,” said Ninete Jr. He said the win was big because it ignited the team and their confidence is greater than it was after dropping the opener to the CNMI 4-1.

Ninete Jr. allowed just two hits and Terlaje came in for the save. Palau will have their chance to settle the score Thursday at 6 pm with the winner of that game advancing straight to the gold medal game.

Format explained
It’s uncharacteristic to have the top two seeds facing each other early in the playoffs but the rules state the winner of the 1 vs 2 game will automatically advance to the gold medal game.

Watch all the games LIVE on the CNMI Pacific Games YouTube channel at 6 pm.