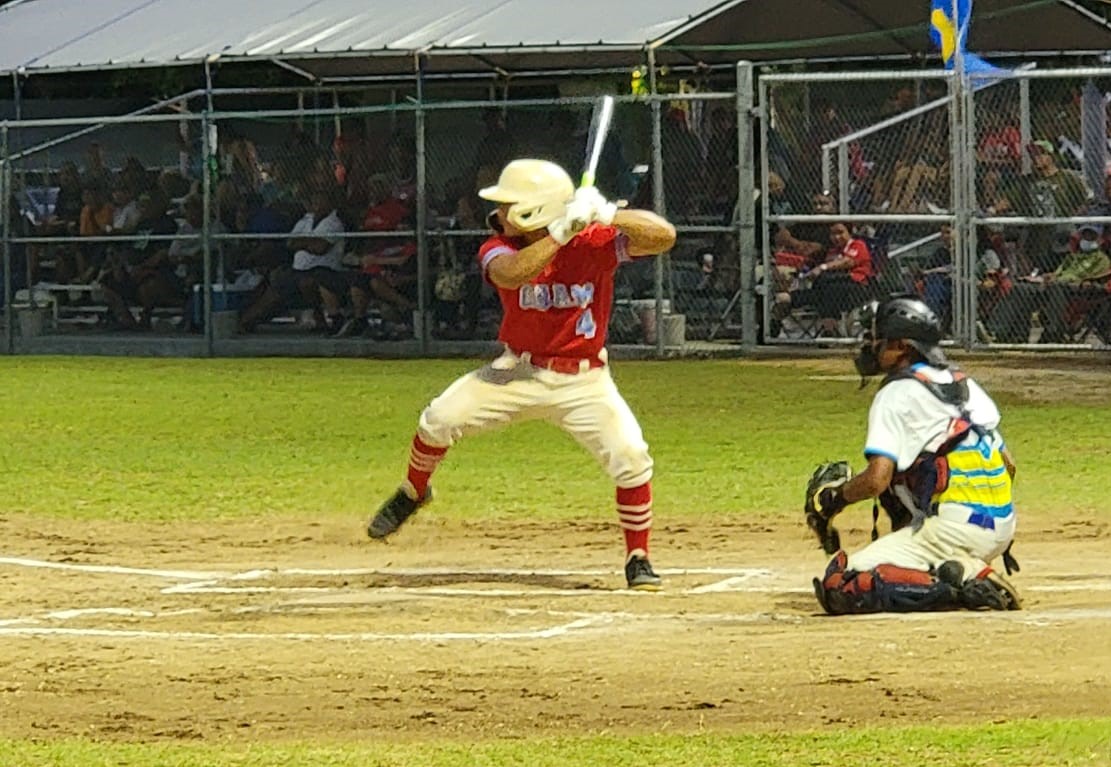 SAIPAN – The day-long trade winds continued to breeze past the baseball field Thursday night and Guam took their sails to advance to the gold medal game of the 2022 Pacific Mini Games.

Guam scored three runs in the sixth and three in the eighth after trailing 3-0 to head to the gold medal game Friday night at 6:45 pm.

Palau and CNMI will play at 1 pm Friday with the winner advancing to play Guam later in the evening. CNMI crushed Fiji 23-2 to stay alive earlier in the day.

With the game tied 3-3, Guam scratched out three gutty runs in the bottom of the eighth to beat Palau for the second night in a row.

After a walk and bunt single, Shane Muna drove in Javen Pangelinan with a shallow single to center. A B..J. Balajadia sacrifice fly and fielding error scored the last two runs.

Palau starting pitcher and UOG Tritons standout O’Neil Yobech was in cruise control from the start, keeping the young Guam bats at bay.

Palau struck first in the top of the third. Dusty Etpison was safe on a fielding error by Guam first baseman Sean Balauro before stealing second. Etpison would score when O’Leary Ise dropped a perfect bunt that third baseman Guaifon Terlaje couldn’t connect to first, making it 1-0.

Palau added an RBI slap single in the fourth to make it 2-0 and loaded the bases in hopes of blowing it open. On a two-out full count, Nolan Cruz got Ise to pop out to right field to stave off any further damage. That would be the end of the night for Cruz as Javier Concepcion came in to relief Guam’s starter.

Palau added an unearned run in the sixth on a Concepcion wild pitch to make it 3-0.

Guam finally got to Yobech in the sixth. After Shon Muna, Jr. singled and stole second, Jeremiah Sablan popped a run-scoring single to right off his knee to awake Guam 3-1. John Salas, Jr. and Shane Muna came right behind with crowd-pleasing RBI singles to tie it all up 3-3.

With the scored knotted at 3-3 after the sixth, Guam brought in veteran left Paul Pangelinan and held down Palau the rest of the way for the win, striking out four in his three innings of work. Yobech went the distance for the tough loss.