2022 I Mas Metgot another huge success 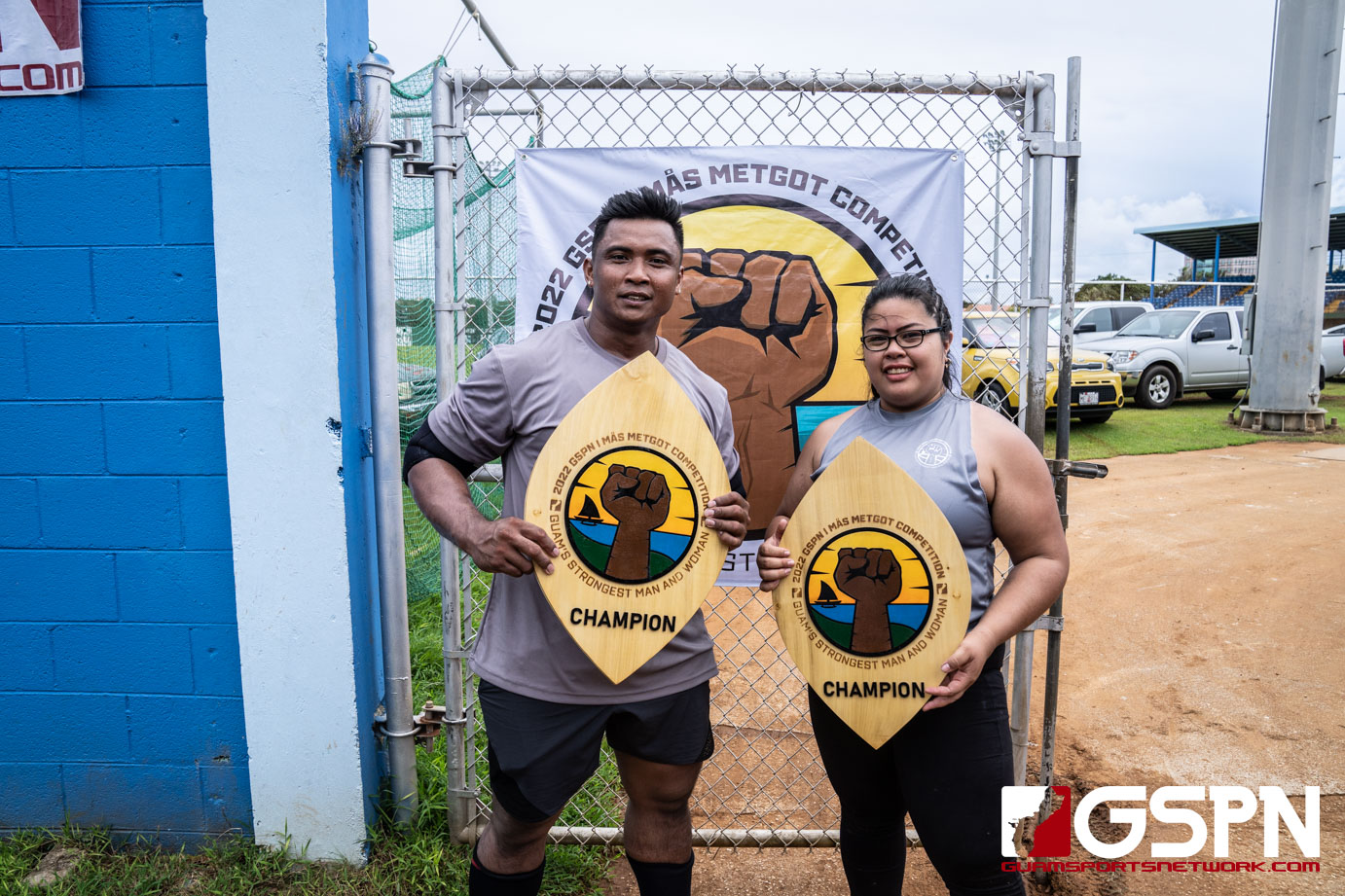 Guam has a brand new Strongest Man and a Strongest Woman who won’t give up her title.

Newcomer Elton Bautista wowed the Sunday afternoon crowd by winning four of the six events at GSPN’s 2022 I Mas Metgot Competition at the Paseo Grounds, taking the title as Guam’s Strongest Man.

Brittney Pereda made it two straight titles as she, too, won four of the six events to easily cruise to another title as Guam’s Strongest Woman.

Mother Nature delivered a picturesque day and the strong athletes performed to an appreciative and supportive crowd. Here’s a recap of each event.

Each athlete had two minutes to lift the ‘Saina’ as many times as they could. Two Guam Health City members sat aboard the outrigger for added weight and challenge.

April Flores, being the youngest out of all the competitors, got things going with seven good lifts. Crossfitter and first time participant Miara Leon Guerrero struggled to find her groove before eventually getting in three lifts. Fellow newcomer Jacinta Sumagaysay and her weightlifting background easily pulled off 18 lifts, but Pereda finished off strong with 21.

One more person was added on to increase the weight. Returnee Tim Nauta kicked things off for the men’s competition with 36 good lifts. MMA fighter/Gym Owner/Crossfitter/BJJer J.J. Ambrose quickly got his first taste of strongman stuff with 23 lifts. Bautista had a respectable 44 lifts in his first event. Astumbo Elementary teacher Ariel Delos Reyes ripped out 51 lifts to take the event, while 2021 champion Anthony ‘Big Ton’ Salas took third with 41.

The men’s tire (1800/25) at more than 900-lbs. made for the port crane went undefeated as all five men were unable to lift the ginormous tire. Event officials chose to have the men use the 400-lb. + tire as well as the women and this is how it finished.

The small sakman named ‘Geftao’ was the featured attraction within the channel of Agana Boat Basin. Men from Lamotrek, a coral atoll of three islands in the central Caroline Islands, navigated the sakman back and forth after each competitor pulled in over 100 feet of line. The canoe was submerged halfway for the women while the men had to pull in a fully submerged vessel.

The Keg Toss was the only event that didn’t involve the clock. The women tossed a 45-lb. keg while the men tossed a 65-lber. Each competitor had three attempts with their best toss being the throw of record. Here are the results:

Heading into the fifth event, conditioning was a factor as fatigue started to set in. The women carried a cylinder weighing 133 lbs. while the men carried a larger cylinder with added weight inside for a total of 175 lbs. Leon Guerrero shocked the competition as the only female to complete the entire 300-foot walk, not event taking a break at the designated reset location.

Bautista was also the lone male to complete the course as all others dropped it along the way. The event win for Bautista put him in prime position of the overall title to that point.