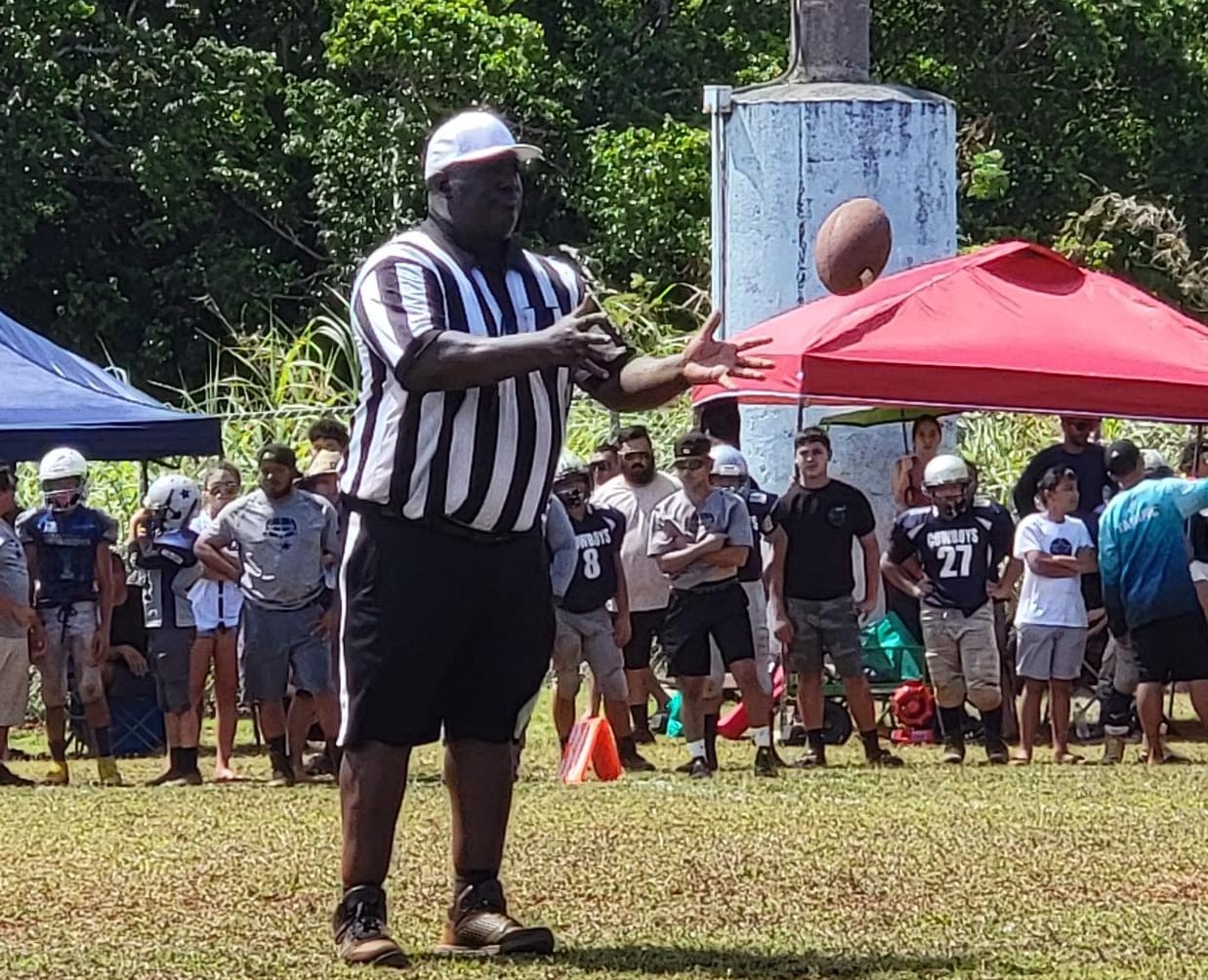 If you’re a Guam football fan, you can hear the crowd yelling and screaming after a close play or unwanted flag, “COME ON DOBY!”

Veteran football referee Dave ‘Big Dawg’ Doby has taken it all in stride…33 years in stride.

From youth football to high school to the adult leagues over the years, one thing that could be certain is for the Big Dawg to be on the field stationed a few yards behind the quarterback wearing his white hat and in control of the gridiron game.

All is fine in Guam’s football world until he calls back a long touchdown by throwing his yellow hanky and presenting the holding penalty sign. That’s when everyone on island knows Doby.

“I don’t know. When one team don’t like me or players don’t like what I’m calling, they just start to holler my name ‘Doby’. I can hear my name called ‘Doby’ way up in the crowd,” said the 60 year old.

And you can’t fault him for favoritism either because he has no relatives on island.

Doby grew up in the deep south of the United States…still quite obvious with his accent that is still strong today. He came to Guam in 1989 when he saw an ad in the Army Times for a procurement manager for Guam Cable TV. After the initial interview, he was on Guam just a few weeks later.

Initially spending his early years calling football games in Texas and Mississippi, Doby took the field on Guam, remembering his first game between the JFK Islanders and Oceanview Knights (this is when Oceanview was still a high school).

“The athleticism of the kids,” Doby remembers the most. “This was my first time (to Guam) and I didn’t think Guam had no athletes, but that changed my mind. Guam has pretty good athletes playing the game of football. That was most surprising.”

Doby says out of his three-plus decades of officiating, the best era for football was in the early 1990’s.

“We had some real good players back then.”

Even though he just turned 60 this year, Doby said officiating has been ‘mostly rewarding’ and that he still loves the game. “Just being around the kids, that keeps me young. It keeps me coming out every year to this game that I love.”

He admits that most of the people he knows on island is through football, though he’s had several private sector jobs before starting up his own business: Professional Training Technology, Inc. which specializes in OSHA/EPA/DOT compliance, training and consulting services since 1994.

He also owns a home in Jonesboro, Georgia where he may retire to once he decides to no longer employ himself.

It was during the Miller Football League years in the late 1990’s when MFL announcer Phil Leon Guerrero gave Doby the dubious distinction of ‘Big Dawg Doby’.

“I guess that’s just a nickname they gave me and it sticks.”

Asked if he likes the nickname, he simply said, “I love it.”