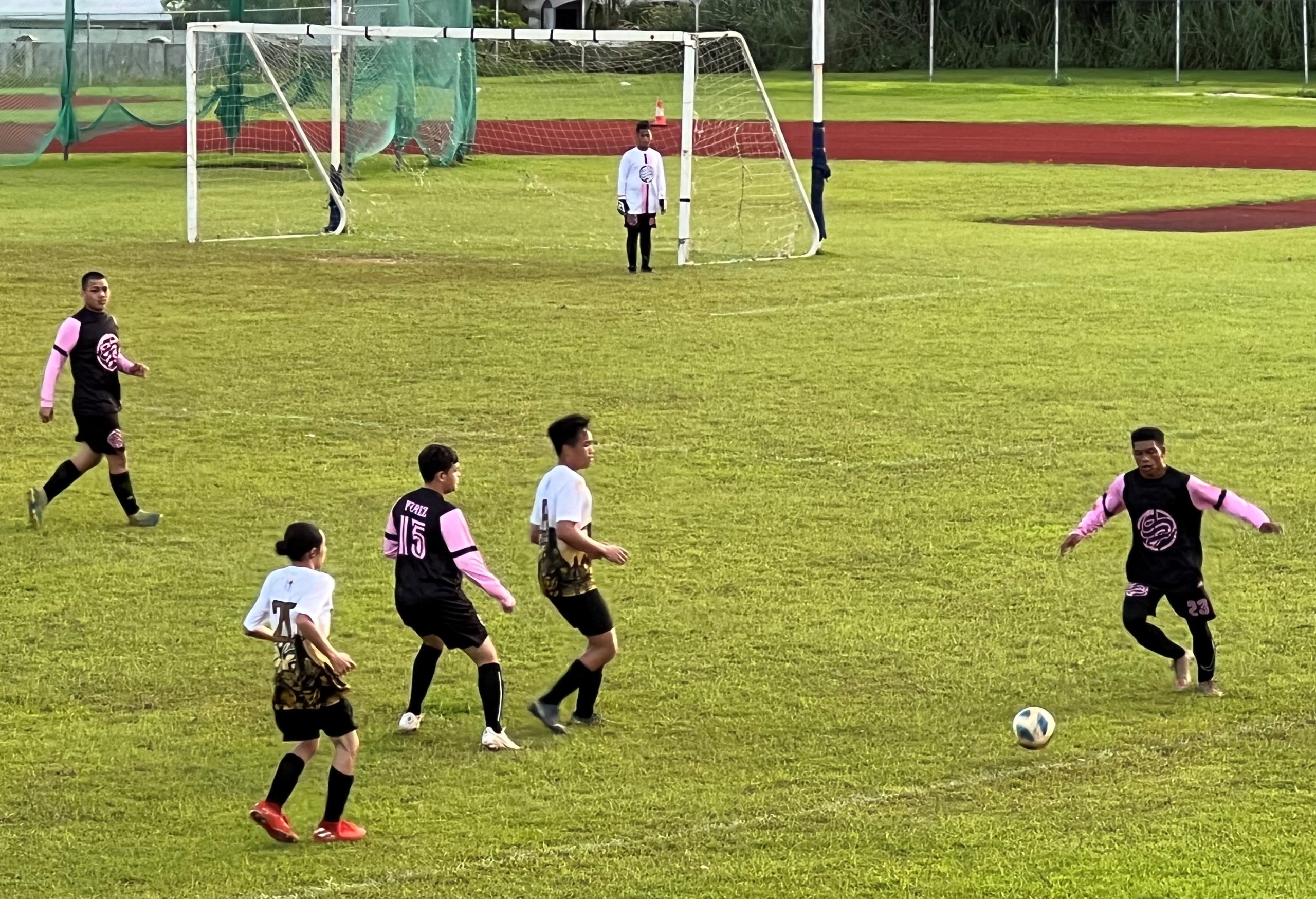 The ISA Boys Soccer League action continued Friday at the JFK Ramsey Field as the Tiyan Titans, coming off a win over the previously unbeaten Okkodo Bulldogs, took on the Southern High Dolphins. The Dolphins defeated the Titans 3-1.

The Titans were riding on the momentum of Wednesday’s upset win over the Okkodo Bulldogs and hoped to continue the streak against the Dolphins.

But it was the Dolphins who would strike first when in the third minute Atienza received a long pass out sprinting the Titan defenders, dribbling down the middle of the field and taking a shot from about 10 yards out toward the back left side of the net for the early 1-0 lead.

“We were motivated to play Tiyan knowing they beat Okkodo. We just wanted to come out strong and win the game.”

Minutes later, the Titans would be called for a foul awarding the Dolphins a free kick. Pangelinan took the kick for the Dolphins which bounced off a Titans defender and back to Pangelinan who took a shot on goal which ended in the arms of the keeper.

Things began to get a little physical by both teams resulting in a couple warnings and a yellow card.

In the 27th minute, Pangelinan dribbled from the left sideline on an attack toward the goal as the defense attempted to kick the ball out of bounds. A miscalculated kick sent the ball directly into the top right side of the net for an own-goal by the Titans resulting in a 2-0 lead for the Dolphins.
The Titans had their opportunities to score throughout the first half, including a couple free kicks, but their best chance to score occurred when Titans Ashton Aguon dribbled past two Dolphin defenders on an attack toward the goal sending the shot over the goal as the first half came to an end.

Second Half
Down 2-0, the Tiyan came out of the halftime with some renewed energy. Just three minutes into the second half Aguon, on the receiving end of a long pass from his keeper dribbled through four Dolphin defenders, with only the goalkeeper between him and the goal, sent a shot to the left corner of the goal to cut the lead to 2-1.
The second half saw both teams with nearly equal shots on goals most of which sailed over the goal posts.
In the 52nd minute, Atienza from the left side of the box found Pangelinan in front of the goal who kicked a clean shot over the goalkeeper extending the Dolphins lead to 3-1.
Pangelinan and Atienza seemed to be on the same page throughout the game as each would find the other with open passes on many occasions.

“At practice we work on chemistry and teamwork,” said Pangelinan.

“Cody and I have been together since middle school,” added Atienza. “Our coaches focus on us being a family. And just knowing where our teammates are and having that chemistry both on and off the field.”

The Titans would get three more open shots at the goal during the half, two of which came from Aguon, but two of the shots were directly to the keeper with one hitting off the cross bar.
With the win and as the playoffs come closer, the Dolphins improved to 4-3, while the Titans fall to 2-4-1.
“We still have a lot to improve, but we will continue to work hard to make it to the playoffs and be number one,” said Pangelinan.
“This is only one win, and we have more games to go,” added Atienza. “There’s still a lot of work left to do to prepare ourselves for the playoffs, but we will be ready.”

Other Game:
The JFK Islanders remain unbeaten after defeating the GW Geckos 8-1. The Islanders improve to 6-0-1 while the Geckos fall to 1-4-2.