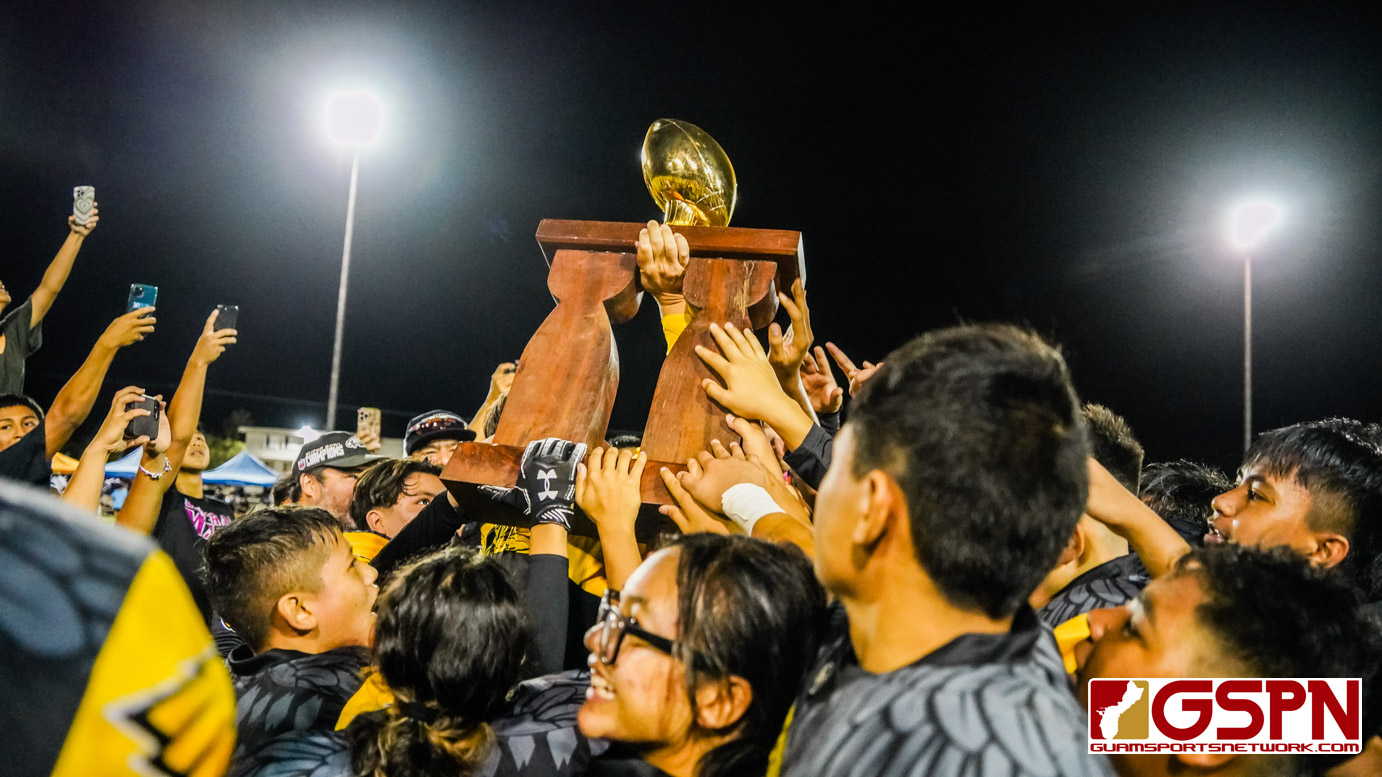 The Eagles won a thriller in the Matua Division of Triple J Ford GNYFF championship game, defeating the Hal’s Angels 22-15 in a night game at the GW Field in Mangilao.

It was the first season since 2019 because of the global COVID outbreak.

As advertised, the game was intense with both teams leaving it all on the line. The game had three lead changes and a dramatic fourth quarter comeback by the Eagles to add the icing on top.

Donte’ Parker made the big play on offense late in the fourth quarter to put the Eagles ahead for good. Parker’s 12-yard touchdown run came with 1:28 left in regulation followed by a 2-point kick by Terince Leon Guerrero.

“It feels good to win this, the team is like a family to me and we all have each other’s back,” said Parker. The Eagles went undefeated and had their backs against the ropes against an Angels team that played their hearts out.

“They came to fight today, they played a great game but we came out to fight too,” said Eagles linebacker Rayn Rios. “We were down, but we didn’t stop believing in our abilities and I’m glad we came out on top.”

Both defenses made big plays in the first quarter with Parker recording two interceptions for the Eagles. The Angels stopped the Eagle power run with Jayden Tomagan and Justin Sablan forcing turnovers at the line of scrimmage.

After the first quarter of play, both teams were unable to find the end zone and it was 0-0.

Angels record a safety
The Angels were able to record a sack for a safety early in the second quarter to go ahead 2-0. Tomagan hit Parker, which forced him backwards into his own end zone and Kyle Julian followed up with tackle for the safety.

Later in the second quarter, Parker caught a pass for a first down and later bulldozed over Angels defenders for 18 yards to set up first-and-goal situation on the 1-yard line.

Eagles quarterback Colen-Ray Salas went in for the QB sneak to put the Eagles up 8-2 after a converted 2-point kick by Leon Guerrero.

The Angels answered immediately with a beautiful 70-yard trick play that silenced the Eagles sideline. Angels quarterback Rieko Mendiola passed the ball to Sablan who was positioned in the backfield. Sablan then passed the ball to Julian for a 70-yard touchdown. Mendiola ran in the extra point and the Angels went ahead 9-8 at halftime.

After a scoreless third quarter, Sablan came up big again, shaking off two Eagles defenders and took off for a 52-yard touchdown. After a failed run attempt, the Angels were ahead 15-8 with seven minutes left in the game.

On the ensuing possession, the Eagles moved the chains with runs from Rios and Parker. The first downs set up a 35-yard touchdown by running back Ty Leon Guerrero. Sablan blocked the Terince Leon Guerrero two-point kick which was huge because the Angels still had a 15-14 lead.

The Angels received the kickoff and looked to move the chains to take some time off the clock. The Eagles denied the Angels from advancing with Landon Suzuki coming up big with a tackle-for-loss and a sack.

The Angels were in a fourth-and-long situation with three minutes remaining and were forced to punt.

From defense to offense, Suzuki came up big in crucial moments. Salas found Suzuki for a 15-yard first down to put the Eagles in the red zone.

The first down set up the touchdown by Parker from 12 yards off the right tackle. Terince Leon Guerrero chipped in the two-pointer and the Eagles were suddenly ahead 22-15 with 1:28 left in regulation.

The game was not over with the Angels taking the field but Suzuki had other plans, recording another sack to force a fourth and long situation once again.

The Angels ran the ball down the right side for a 10-yard gain but it was not enough for the first down and the Eagles took a knee to end the game.

“Focus and discipline. That’s all we needed to get us there,” said Suzuki. “We were down and coach (Ryan Wessling) told us at halftime that the game wasn’t over and we had another half to play”.

Angels stats
Sablan had 80 rushing yards on eight attempts to lead all rushers and threw a touchdown pass for 70 yards. Tomagan had a game-high eight tackles. Julian had 4.5 tackles and a sack. Julian also caught 87 receiving yards. Mendiola had 55 passing yards and a rushing extra point.

Earlier in the evening, the Angels finished their undefeated season with a 34-13 win over the Packers for the Metgot championship.

After trailing 13-7, the Angels charged ahead and left no doubt behind.