JFK proves to be too much to claim title 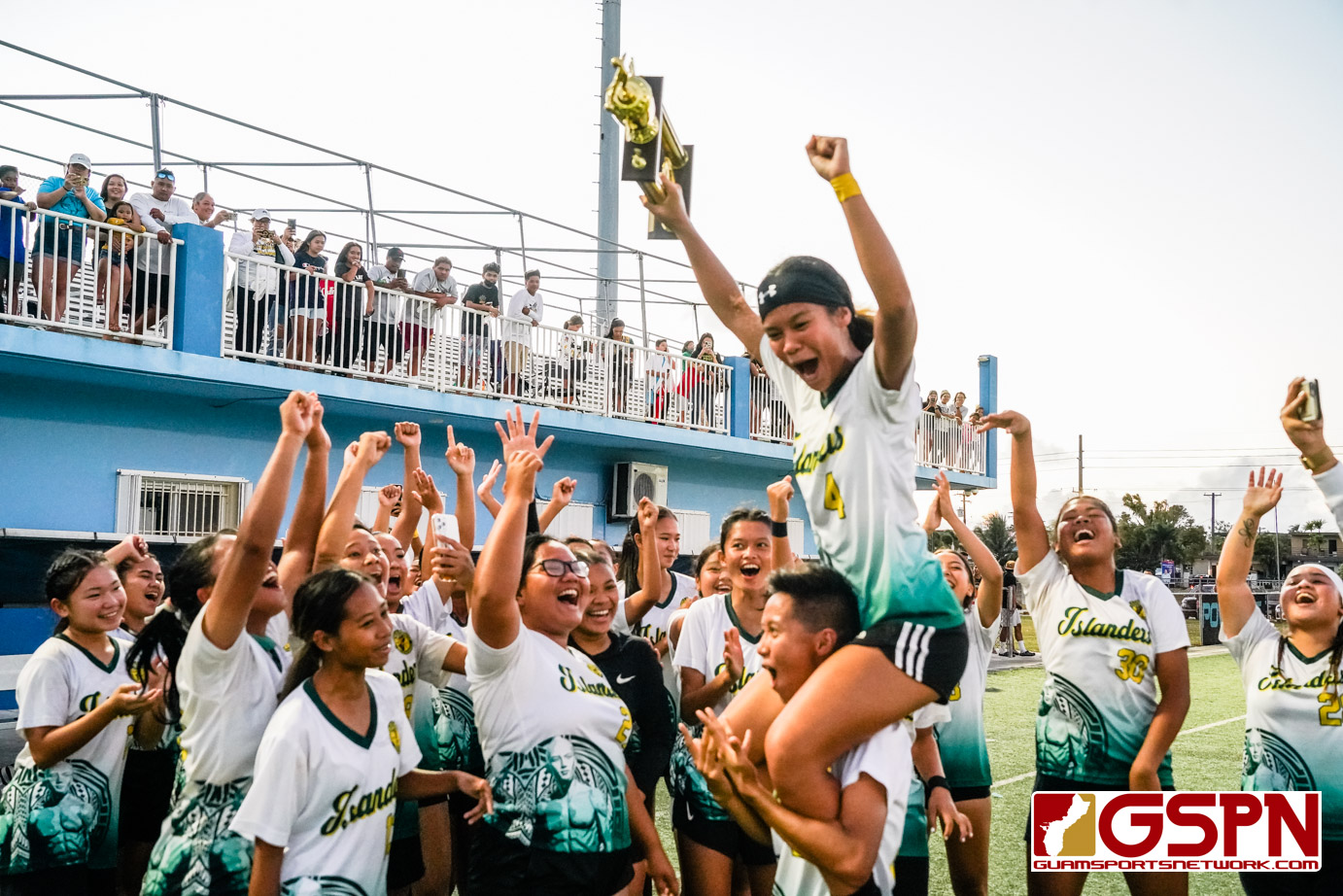 The JFK Islanders are back-to-back champions capping off their perfect season by defeating the Southern Dolphins 5-2 in the ISA Girls Soccer championship Saturday evening at the GFA sports complex. The Islanders are on a 17-game winning streak, including playoffs, dating back to last season.

JFK won the title last year in a shortened season going undefeated at 5-0 and shutting out each opponent. This year, the Islanders outscored their opponents 57-7, dominating both sides of the field.

All-Island junior standout Jada Han led the way, recording her second hat trick of the playoffs. Two of which were made from 18 and 38 yards out.

“I pray to God every time I take those kicks that he would give me the strength to kick far.”

In the 32nd minute, positioned at the top of the penalty box, Han sent a shot up and through the right side of the net for her second goal of the game. Four minutes later, the Islanders found themselves with a corner kick. Han, taking the kick, sent a shot towards the goal box where teammate Nevaeh Finona was in position to tap the past the goalkeeper for the 3-0 lead with four minutes left in the half.

The Dolphins would not be deterred by the deficit as they made an attack of their own. Just before the halftime whistle, Southern’s freshman sensation Cindy Maestrecampo was fouled in the penalty box awarding the Dolphins a penalty kick. League MVP Analea Meno would take the PK to the left side of the goal for the Dolphins’ first score of the game in the 38th minute mark to finally get Southern on the board.

“Coach (Lad Manansala) told us to keep our head in the game and not to let down,” said Han. Noting that there was still 40 minutes left. “Coach emphasized to keep playing our game, keep taking our shots and defend well.”

In the second half, the Dolphins started out as the aggressors finding multiple opportunities minutes into the half with wide open shots. Maestrecampo found herself in position to put points on the board for the Dolphins, but each shot found its way straight to Islanders goalkeeper Emma Iriarte.

The Islanders quickly turned the tide and went on the attack as Cassandra Kido dribbled past two defenders and was fouled in the penalty box. Jodee Halili took the PK and netted her shot to increase their lead 4-1 five minutes into the second half, all but taking the air out of any Southern comeback.

Han just about wrapped up the championship season in the 11th minute went she sent an unbelievable free kick from 38 yards out over the head of the Southern goalkeeper for her hat trick and an insurmountable 5-1 lead.

The Dolphins continued to fight, however, mounting multiple attacks on offense. In the 72nd minute Crista Cruz would pass off to Maeatrecampo who dribbled past JFK’s defense and netted a shot to the left side of the goal for Southern’s second score of the game.

The ball went back and forth for the remainder of the game with the Islanders in control of the ball as the referee signaled the end of the game.

“I’m so overjoyed right now,” said Han. “I’m really proud of my team and proud of myself that we were able to bring another championship to JFK.”

Islanders head coach Eladio Manansala noted that with a young team and defending a title, there’s a high expectation to perform at a high level.

“As a coach, it’s rewarding to win a championship back-to-back and going into every game with a target on your back, I have to remind my team that we have to continue to work hard.”

“It doesn’t matter if we’re 10-0, what matters is what happens in the championship game, and it showed tonight. From the get-go they hustled.”

The Islanders played with a lot more aggressiveness and hustle than in the semifinals and as Han mentioned, the All-Island list played a part in that motivation.

“What drove us to come out strong today was the list. I think we wanted to prove to everyone that more of my teammates deserved to be on that list,” said Han.

Manansala added, “Being 10-0, undefeated this year and last, our defense has to be recognized for that. But I keep reminding them that it’s a team sport and what matters is winning the championship whether your names is on a list or not. It’s a team effort and it showed tonight…they played as one.”

The Islanders have high hopes at repeating as champions again next year as their team is mainly comprised of underclassmen.

“I have a young team coming back next year. And to defend the title they need to continue to play year-round soccer through their clubs, the GFA programs, etc. and they cannot wait until next season…they need to keep playing soccer,” said Manansala.

“I’m looking forward to another run at the championship next year. Our team is young, and I hope we can come back even stronger than we were this year.” Han added, “I also hope that we can challenge the private schools next year.”

Han’s hat trick was her second of the playoffs.