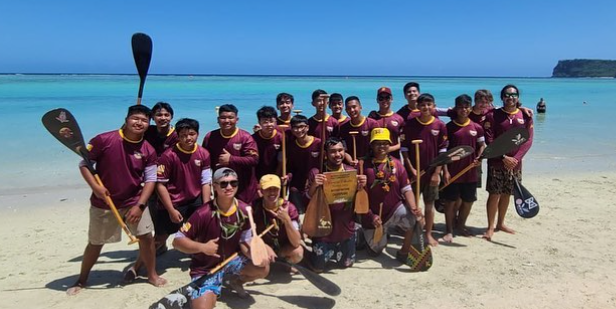 Teams earned cumulative team points with each race and overall awards were presented in the Sottera, Sotteru, and Sottero divisions: The Academy of Our Lady of Guam’s Cougars were crowned Sottera Champions with a total of 118 points, followed by Guam High School Panthers with 95 points, and St. John’s School Knights with 66 points.

The Father Duenas Memorial School Friars held on to a comfortable lead to finish as Champions in the Sottero division with 104 team points, with the St. John’s Knights finishing the season strong closing the gap with 96 points, followed by the Guam High School Panthers with 79 points.

Guam High School dominated the Sottero – Mixed division, finishing first in 8 of the 9 series heats finishing as Mixed Division Champions with a solid 149 team points, followed by the combined Friars-Cougars crew with 94 points, and the Knights with 66 points.

Senior Year paddlers were recognized during a final Senior Lap with their coaches with family and teammates cheering them on.

Race director Natalie Calvo noted, “The Karerån Galaide has thrived since its’ inaugural year in 2005 through the support and effort of many dedicated people and with the support of the Guam Kayak and Canoe Federation. This season, although short, has been so rewarding to see how the teams have melded in a short time. In every season, there’s a point where you can see everything start to click, like an “aha” moment, and this week it showed. The paddlers did great! I have to thank the IIAAG and its’ member schools, the Guam Fire Department, the Department of Parks and Recreation, First Aid Service and Care – FASCARE, and especially The Poksai Canoe Club for providing the resources to ensure safety and a successful league.”