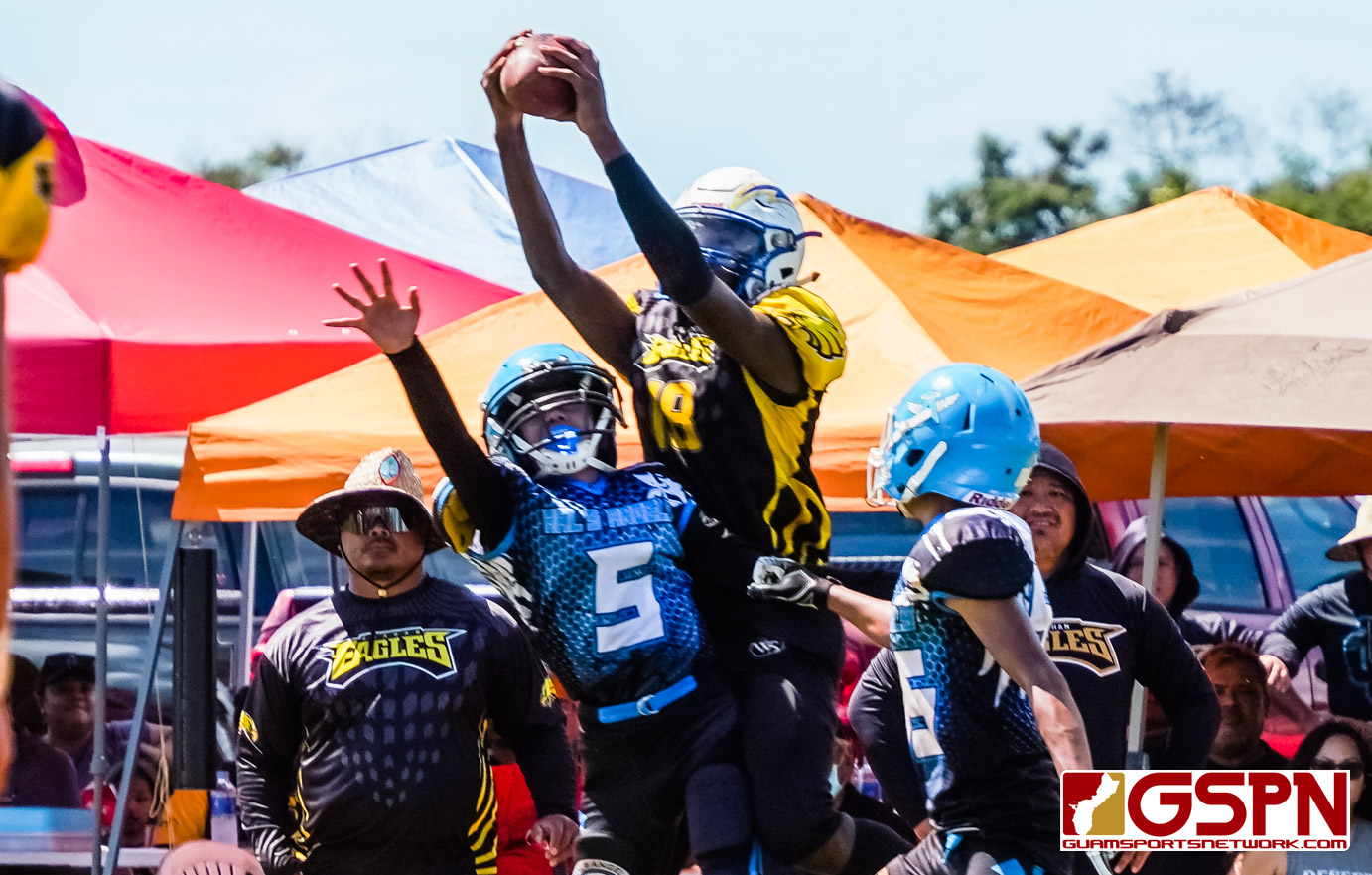 The Hal’s Angels and Guahan Eagles Matua teams came into the final 2022 Triple J Ford GNYFF League weekend with perfect 7-0 records. Some thing had to give.

In one of the most anticipated youth football games in quite a while, the energy on the field was electric and it was impossible not to get pumped-up for the game with many fans screaming with a passion.

What also accompanied the energy was the incredible start to the game as the Eagles’ Ty Leon Guerrero ran a 40-yard return right off the bat, allowing a fast pace start of the game. The Eagles pushed down deep into the red zone before with Rayn Rios punched in the first score from 5-yards out.

After an impressive ensuing drive by the Angels, Rios’ heroics struck again with a huge defensive play, causing a fumble that turned over the possession followed by a 30-yard score through the Angels defense.

The PAT run was successful by Mason Calvo and the Eagles had a quick 13-0 lead.

Coming in with the top defensive team on the island, giving up only 14 points in the season, the Eagles defense showed why early with a couple of sacks from Dreyvin Quitugua and Mackenzy Sablan.

The Angels, however, took advantage of a bobbled punt as Liam Concepcion came up with a huge recovery. Rey Duran made the Eagles pay for the mistake as he scampered from 40-yards out to put the Angels on the board.

Rieko Mendiola would later score a short TD from the 5-yard line. The PAT would fail, but the game was tight at 13-12.

Just prior to halftime, the Eagles would score what would be the last of the game when Ethan Limtiaco connected with Donte’ Parker for a 30-yard strike.

The second half was a defensive battleground as neither team were able to hit pay dirt.

Eagles coach Ryan Wessling showed how important this victory and game is for the Eagles, “Going into the playoffs we get to hold the top seed, but at the end of the day it was great football for both teams.”

For his awesome play on both sides of the ball, Rios was the Wendy’s Player of the Game. He said this game meant everything for the Eagles.

“I believe this season is not over, but we got to work together until the (championship).”

The Hal’s Angels had no problem ending their Metgot season unbeaten with a 33-6 win over the Eagles.

Justice Alcantara had another huge game, scoring four touchdowns for the unstoppable Angels.

With an exciting regular season all wrapped up, the semifinals look like this:

League officials will meet on Monday to determine the field location and the days that these matchups will take place next weekend.