PROSPECTS PROPEL TO U18 MARIANAS TITLE 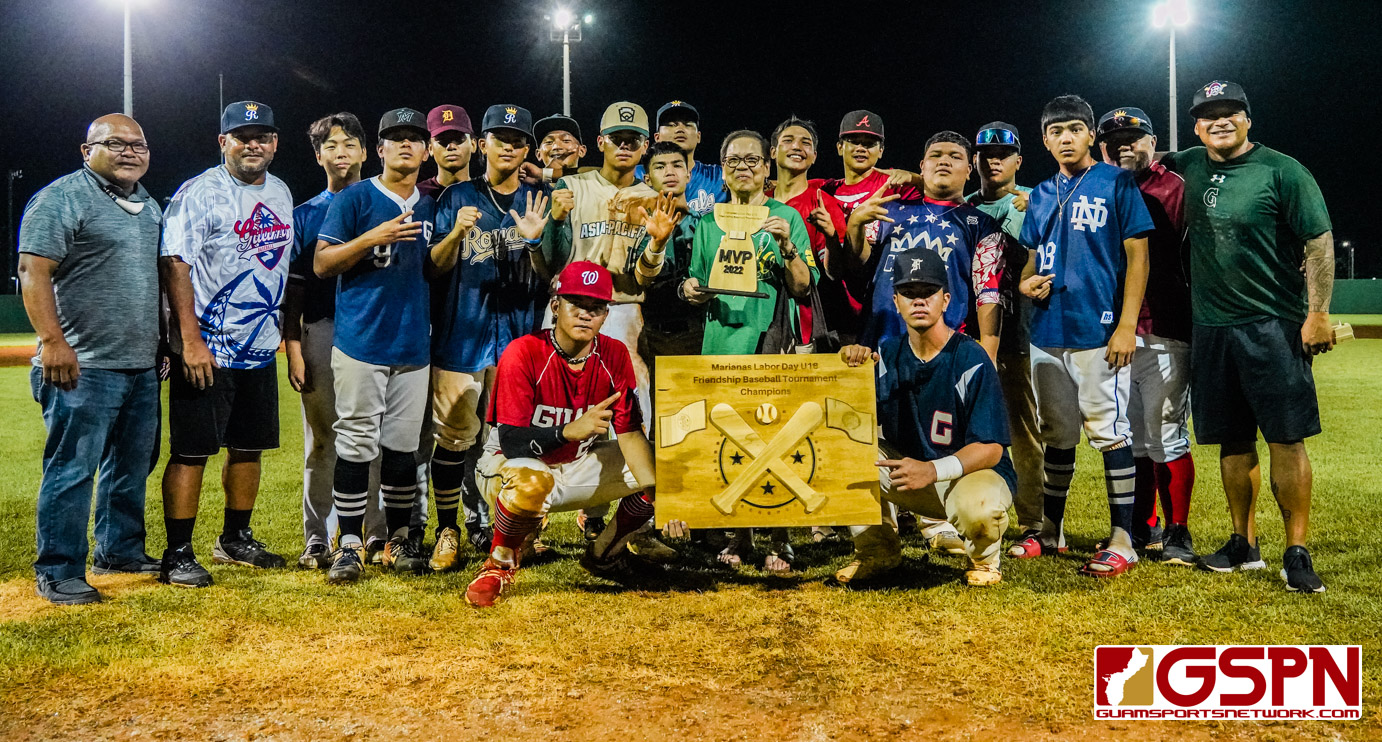 The Guam Prospects were crowned champions of the Inaugural Marianas Labor Day U18 Friendship Tournament defeating the Guam’s Dubs 7-2 Monday night at the Paseo stadium. The Prospects went undefeated in the tournament with the Guam MVP award for the tournament being awarded to the entire team.

Franklin Ninete Jr. took the win for the Prospects going 6 2/3 innings holding the Dubs to one run on four hits and ten strikeouts.

Both Guam teams earned the right to compete for the championship after winning their respective semi-final games earlier in the day over the visiting Saipan teams.

Prior to the start of the championship game, Department of Parks and Recreations Director Roke Alcantara Sr. and Mrs. Alcantara threw out the ceremonial first pitch as both teams watched from their respective base lines.

In the top of the first inning the Dubs leadoff batter Javy Concepcion reached base on a throwing error by the second baseman allowing Concepcion to advance to second base.

Concepcion would advance to third on a passed ball and a wild pitch by Ninete would allow Concepcion to score the first point of the game.

Struggling to find his footing early on due to the conditions of the mound, Ninete would give up a base-on-balls to Zach Muna followed by a Zavier Camacho single to right field to put runners on first and second with no outs.

“I had to get a feel for the mound because it was slippery on my landing point,” said Ninete. “But I was able to do what I had to do to get back on track and stick to my mechanics and just throw strikes.”

Ninete did just that striking out two of the next three batters to end the top half of the inning with his team down one run.

Bottom half of the inning the Prospects, with two outs, would put runners on first and second after Ninete singled to right field followed by a base-on-balls by Javen Pangelinan. But Dubs starting pitcher Arren Yatar struck out the next batter for his first strike out of the game to end the threat.

Taking a 1-0 lead into the top of the third the Dubs threatened to add more runs to their lead with the bases loaded, but Ninete would put an end to the threat catching the next batter looking with a called strike three for his fifth strikeout of the game.

The Prospects offense sprang to life in the bottom half of the inning after a 2-run single by Jace Gumataotao would score Ninete and Pangelinan to give the Prospects the 2-1 lead.

Ninete continued to keep the Dubs hitters at bay collecting his six and seventh strikeouts of the game maintaining their one run lead. The Prospects however would add to their lead putting up three more runs in the bottom half of the fourth inning to extend their lead to 5-1.

The Prospects would add two more runs in the sixth inning behind an RBI single to center by Ricky Leon Guerrero to further extend the lead to 7-1.

Ninete continued to add to his strikeout count in the seventh inning striking out the first two batters for his ninth and tenth strikeouts of the game. He would leave the game two batters latter as suffering from a leg cramp. Leon Guerrero, who would replace Ninete as pitcher, would strike out the first batter he faced to end the inning.

“I was feeling good until I began to feel my leg cramp,” said Ninete. “I tried to push through it a little but I just couldn’t, so I had to take myself out.”

The Dubs would manage to get three hits in the top of the eighth ending the scoring drought on an RBI single to left field by Darren Eclavea to cut the lead to 7-2. But Leon Guerrero would put a halt to the rally with his third strike out of the game.

In the final inning, Leon Guerrero retired the side in order ending the inaugural tournaments championship game.

“It’s good for both islands,” said Ninete following the win. “I know Saipan hasn’t been able to play because of the typhoon that hit them 4 years ago, so I’m glad they were able to make it here to play us.” Asked if he looks forward to defending the title next year, Ninete replied, “Yes sir, hopefully! Let’s get it!”

“I didn’t think I was going to get the (CNMI) MVP. I thought it would be my teammate, Kaipo Dikito. He’s one of our best players and I respect him a lot,” said Omapas.

“I didn’t expect to throw a no-hitter,” said Omapas. “I felt good…I did my best out there and was able to get my first no-hitter.”

“It feels good to participate in the tournament…It’s been four years since we played tournament baseball, so it was really good to go out and feel the adrenaline again,” said Omapas. “This tournament is good for both our islands, and I hope we can invite more teams (from Palau and the FSM) to join the tournament.”

The Marianas Labor Day U18 Friendship Tournament showcased the top baseball athletes in the Marianas with players from both Guam and the CNMI. Next year’s tournament is scheduled to take place on Saipan.

The tournament was in honor of former pitching standout Steve Alcantara, who passed away in a drowning accident in 2011. The final score of 2-7 turns out to be Steve Alcantara’s jersey number #27.

“How ironic that the score came out to be like that,” tournament organizer Roke Alcantara said. “Steve gave us good weather throughout the weekend and now another sign that he’s with us with the championship game score.”

Kayna Kanemoto powered the Sharks with 22 kills, 4 aces and a block.