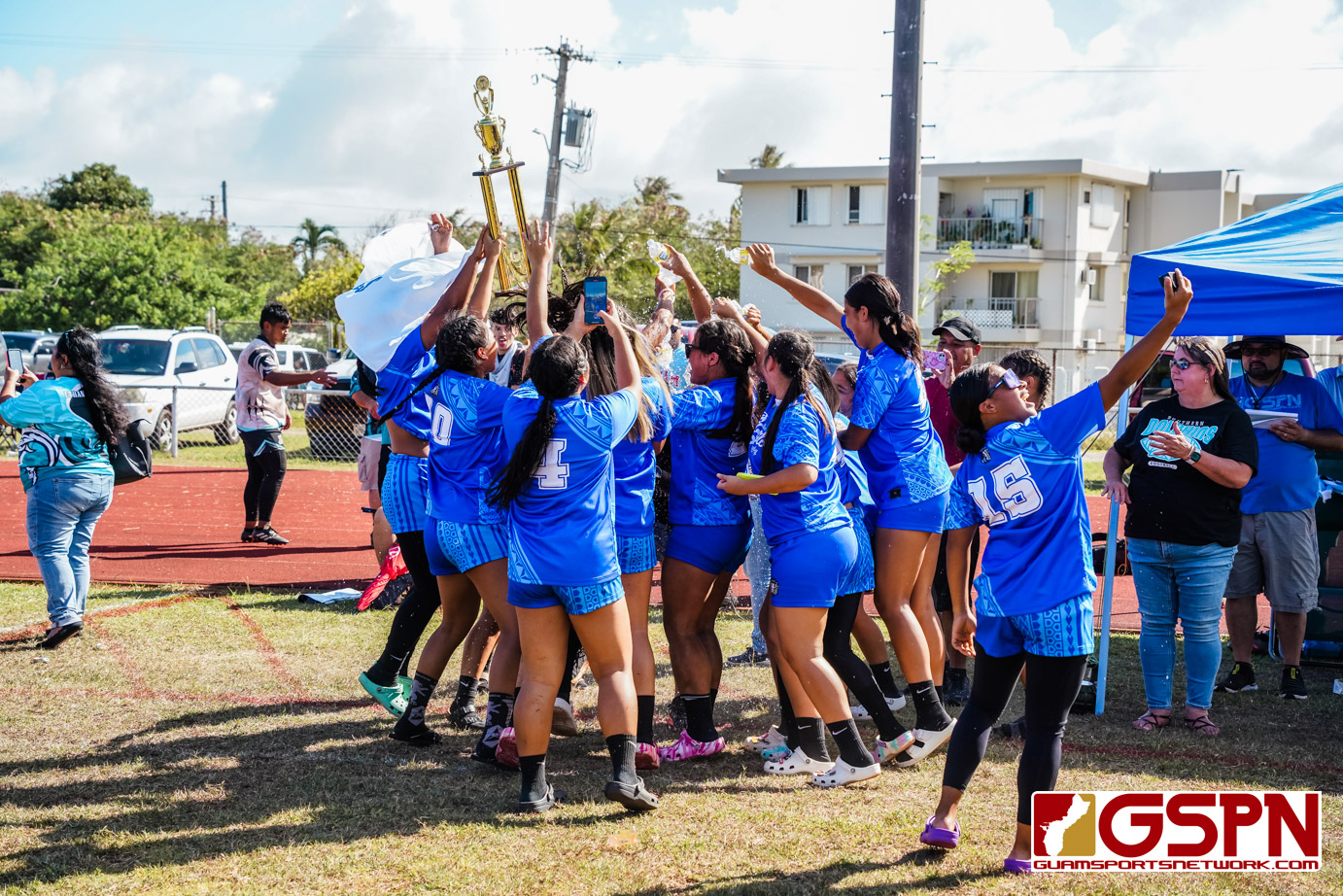 Makayla Atoigue led the way for the Royals scoring minutes into their game on their way to a 24-7 win over the Southern Dolphins. Caleb Murphy scored two tries in the second half for the Friars who defeated Southern High 34-0.

The Royals were clear favorites in their finals match, having ended the season undefeated heading into the playoff, but the Dolphins came ready to play never backing down from the challenge.

Minutes into the game, Atoigue found a wide-open lane down the left sideline taking it in for the first try of the game. With the conversion no good the score remained 5-0.

After a brief back and forth, the Royals marched down the field, this time with Nelisa Torres pounding her way up the middle and pushing through for the Royals second try of the game.

The conversion was no good keeping the score 10-0.

As time winded down in the first half and the Dolphins on offense, ND’s Engracia Atalig intercepted a pass and took it 40 years for the third try for the royals. A successful conversion expanded the lead to 17-0 as the first half came to an end.

Coming out of the half, the Dolphins turned up the heat marching the ball down the field getting as close as 10 meters out before getting stopped by the Royals defense. The back-and-forth possessions by both teams ended as the Royals on another attack marched down field as Anita Manglona made her way into the endzone for the fourth try, extending the lead to 24-0 after a successful conversion.

The Dolphins were not dismayed by the score and continued to battle marching down the field as the clock was winding down. With little time left on the clock the Dolphins finally broke through the endzone as Sadie Topasna scored for Southern.

Briann Taisapic kicked the ball through the uprights for a successful conversion to make the score 24-7 as time expired.

“I’m really proud of my team today and our performance. Four of us scored a try each which says a lot about how capable everyone on our team is of contributing,” said Atoigue. “It’s just a result of a long hard-working season.”

“We have two seniors, a lot of juniors and a lot of impact sophomore players. So that makes me really excited for next year and the years to come,” said Atoigue who ends her high school career with the rugby title and first team center but a wrestling title for ND as well as a gold medal and the wrestling girls MVP.

The win for the ND Royals is their third in a row completing the perfect season.

The boys finals game lived up to the hype of the aggressiveness and physicality that would be on display but it was all FD in the end who found the end zone.

Evan Brown led the scoring for FD taking it down the right sideline and pounding his way into the endzone to put the Friars on the board four minutes into the game. With the conversion missing wide left the score remained 5-0.

At the midway point of the first half things got a little heated as a player from each team had to be restrained after the conclusion of a play that ended up in front of the Southern bench.

Minutes later, from 40 yards out, FD’s Tristian Burgos found a gap in the middle of the field by passing three Southern defenders and sprinting into the end zone for the Friars second try of the game. Caiyle Gogue’s conversion was good, extending the lead to 12-0 as time expired in the first half.

“Going into the half we knew we couldn’t take our foot off the gas pedal and that we have to keep on going until the last whistle,” said Murphy.

The Friars came out firing on all cylinders after the break as Garrison Arriola, out of a scrum near the goal line, rammed his way through the Dolphin defense and into the end zone for a try. The conversion was good giving the Friars a 19-0 lead.

Although FD had a big lead on Southern, the Dolphins refused to back down, battling their way down the field as Micah Redmond nearly broke free before being stopped by the FD defense near the goal line.

Motivated by his teammate’s determination to fight till the last whistle, Dolphins underclassman Shaeden Michael Leon Guerrero got in the mix taking down a Friar twice his size to the cheers of his team.

Later in the half, Caleb Murphy received a pass out of a ruck, found the right side open sprinting down the sideline for 45 yards and into the end zone for his first try of the game.

In the remaining minutes of the game, FD added a try by Tony Babauta and Murphy’s second try as time expired giving the Friars a 34-0 win.

“We knew it was going to be a dogfight, but we came here cool, calm and collected and we
had our mind straight and set on our goal to win and we executed really well. It takes a lot of determination and it’s a wholesome thing.”

According to Murphy, FD lost a good number of seniors however the remaining players looking to return will allow the Friars to defend their title as they work toward their fourth straight.

“We have a lot of young and up and coming stars that can really offset the team to where we need to be for next year,” said Murphy. “We look good!”