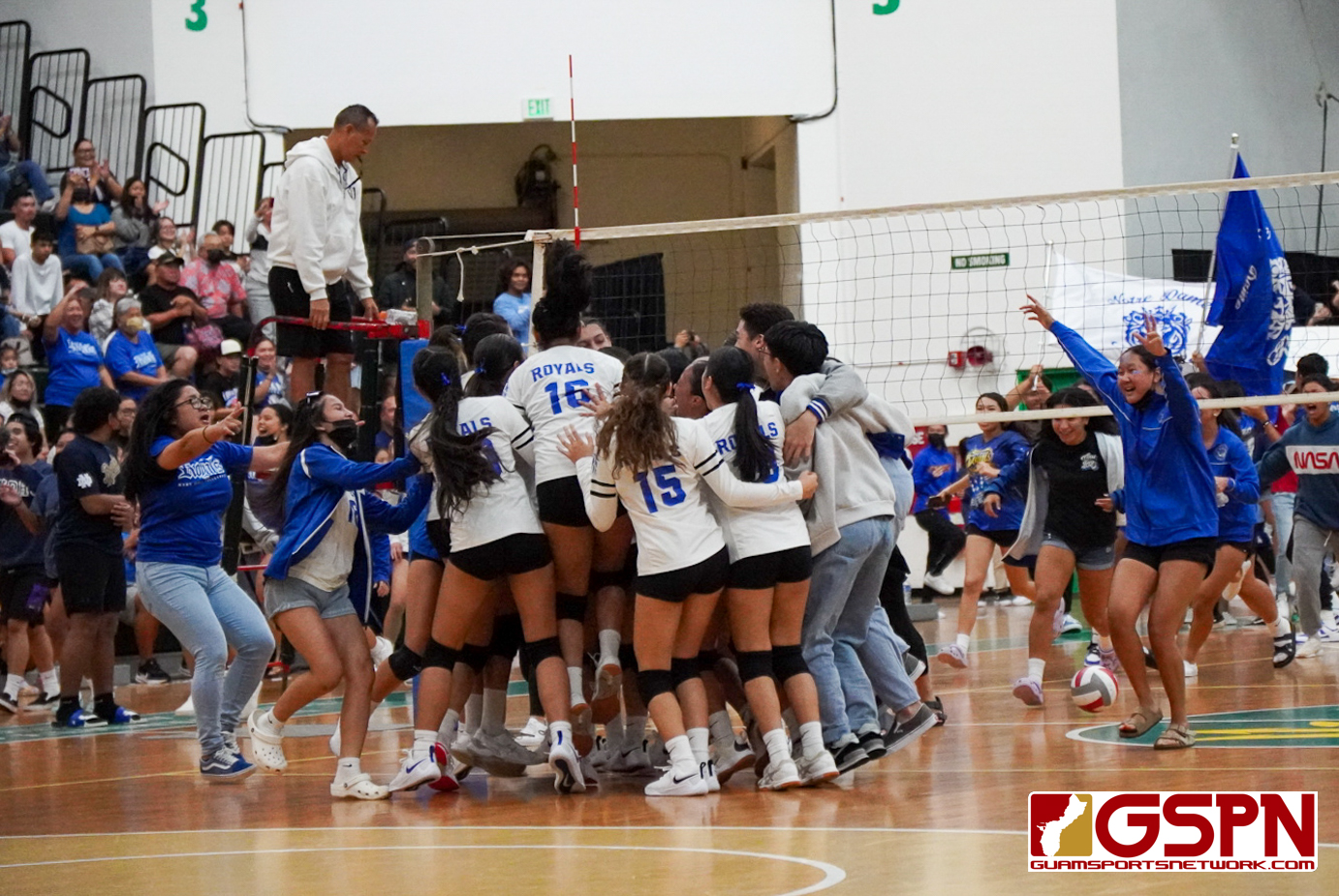 The Notre Dame Royals are champions of the IIAAG Girls Volleyball League after defeating the Academy of Our Lady of Guam Cougars in four sets 25-16, 23-25, 25-19, 25-14 Friday night at the University of Guam Calvo Fieldhouse.

Senior outside hitter Faith Piper powered the Royals to their first title in three years with 16 kills and four aces. Mercedes Cruz added six kills, three aces and a block while Seniayath Bell had five kills and three aces for the Royals.

“We all played our game tonight. We took everything we learned at practice and put it into play, and we just played our best and with our hearts.”

“It was just trust for me,” said ND setter Nyarah Paet. “Because we work so hard for this, and I just had faith in my hitters.”

Paet was credited with 21 assists as she put her teammates in position to rack up kills all game long.

The atmosphere was rocking all game long as spectators and supporters from both teams packed the fieldhouse to near capacity. The noise level from start to finish was definitely the atmosphere of a championship game.

“I knew when the fieldhouse was packed and loud during the third place game that it was going to be very loud for the championship game,” said Piper when asked if the atmosphere played a factor in the game. “We got to tune out the noise and just focus on the game and the court and the coaches,” she added.

“You just have to drown it out,” said Cruz. Chuckling that, “I didn’t hear a thing.”

“I just tried to think of it as music,” added Paet. “We always practice with music, so I learned to tune it out and focus on my game.”

From the start, the Royals proved to be too much for the two-time defending champion Cougars, jumping to an early 3-0 lead. A lead they extended throughout the set.

Both teams struggled early on in the game combining for a total of 23 errors. But it was Piper, Bell and Cruz who combined for six kills and four aces in the first set that led the Royals to an easy 25-16 first set win.

The second set, however, would be a different story.

With the Cougars losing by a large margin in the first set, the Royals became complacent, committing six errors and allowing the Royals to jump to an early 6-3 lead.

The Royals would regroup and score the next five straight points behind an ace and a kill by Piper to give the Royals the 8-6 lead.

Up 16-12, ND looked to put another quick end to the set as Piper hit back-to-back kills followed by an ace from Cruz and a Cougars hitting error that put the Royals up 20-12.

But the defending champs put everyone on notice that that they still had a lot of fight in them.

The Cougars mounted a run of their own, scoring nine straight points behind an ace from Genice Torres and back-to-back kills from Gabriella Mata and Hinengi San Nicolas to take the lead at 21-20.

Piper would put a halt to the scoring run with her seventh kill of the game followed by an ace from Paet to regain the lead 22-21.

With the Royals up 23-22, a huge kill from Natasha Kelly tied the game up for the Cougars while switching the momentum to her side of the court. A hitting error followed by a net violation on the Royals would give the Cougars the 25-23 second set win knotting the game up at one set each.

“When we were up, I think we all just got a little too excited,” said Piper. “They started coming back and their momentum pushed them to win the set.”

“Coach (Mike Rabago) always says we aren’t going to win or lose a game with one set,” said Bell. “So I just reminded everyone of that and to keep fighting like we did in the first set.”

“We were taught to weather our emotions rather than to let it all out on the court. Our coaches did a great job of preparing us for the game.”

In the third set and the score tied 7-7, the Royals Melissa Blas hit three straight aces to put her team up 11-7.

The Cougars would then take advantage of five straight errors by the Royals to cut the lead to 15-14.

With ND up 19-16, Piper took over the game for the Royals who would go on to outscore the Cougars 6-5 behind four kills from Piper and one kill from Cela Langas to give the Royals the 25-19 third set win, putting the Royals one set away from the championship.

In the fourth set, the Cougars scored the first two points behind a kill from Mata and an ace from Ariana Cruz.

Moments later Piper would collect her 15th kill with Paet nailing three straight aces to give the Royals the 5-3 lead.

The score would go back and forth towards the middle part of the set when a kill by Natasha Kelly would give the Cougars a slim 13-12 lead.

Things then would fall apart for the Cougars as the Royals would mount a huge 12-0 run to put the Royals at championship point and a 24-13 lead.

During that run the Cougars would commit six errors, but it was the offense of the Royals that did the damage. Pipers’ 16th kill and two aces, along with Cruz and Bell’s two kills each pretty much sealed the deal for the Royals.

On championship point, Paet served up a set to the left side to Bell who sent a shot that landed just inside the endline for her fifth kill of the game and regain the title.

“I feel awesome,” said Bell following the win. “I really wanted this, and I had a good feeling that we were going to take it back. We wanted it way more.”

“I’m beyond excited,” said Piper. “I’m glad that everything we’ve done all season worked out and that we could finally bring the trophy back home.” For Piper, it’s on to the next sport but looks forward to pursuing a possible collegiate volleyball career in the future.

The Notre Dame and Academy rivalry is alive and well and if tonight’s atmosphere is any indication, this rivalry will only get bigger and better in the future.

“It’s always a good time playing them,” said Piper. They are a very good team with good defense, and they can always count on their big blockers and their hitters to get it down. So I know it’s a challenge and we know it’s always going to be a good game.”

Championships in her DNA

Sophomore middle blocker Mercedes Cruz had a lot of motivation going into the championship game.

“My motivation for tonight’s game was my grandpa and my legacy at ND,” said Cruz. “My grandma won the first volleyball championship for ND and my grandpa was the coach. My mom also won a championship and now me.”

Cruz proved herself to be a force in the middle and only being a sophomore at ND, Cruz stated that, “I’m just going to try and do this with my team again for the next two years. This feels amazing”