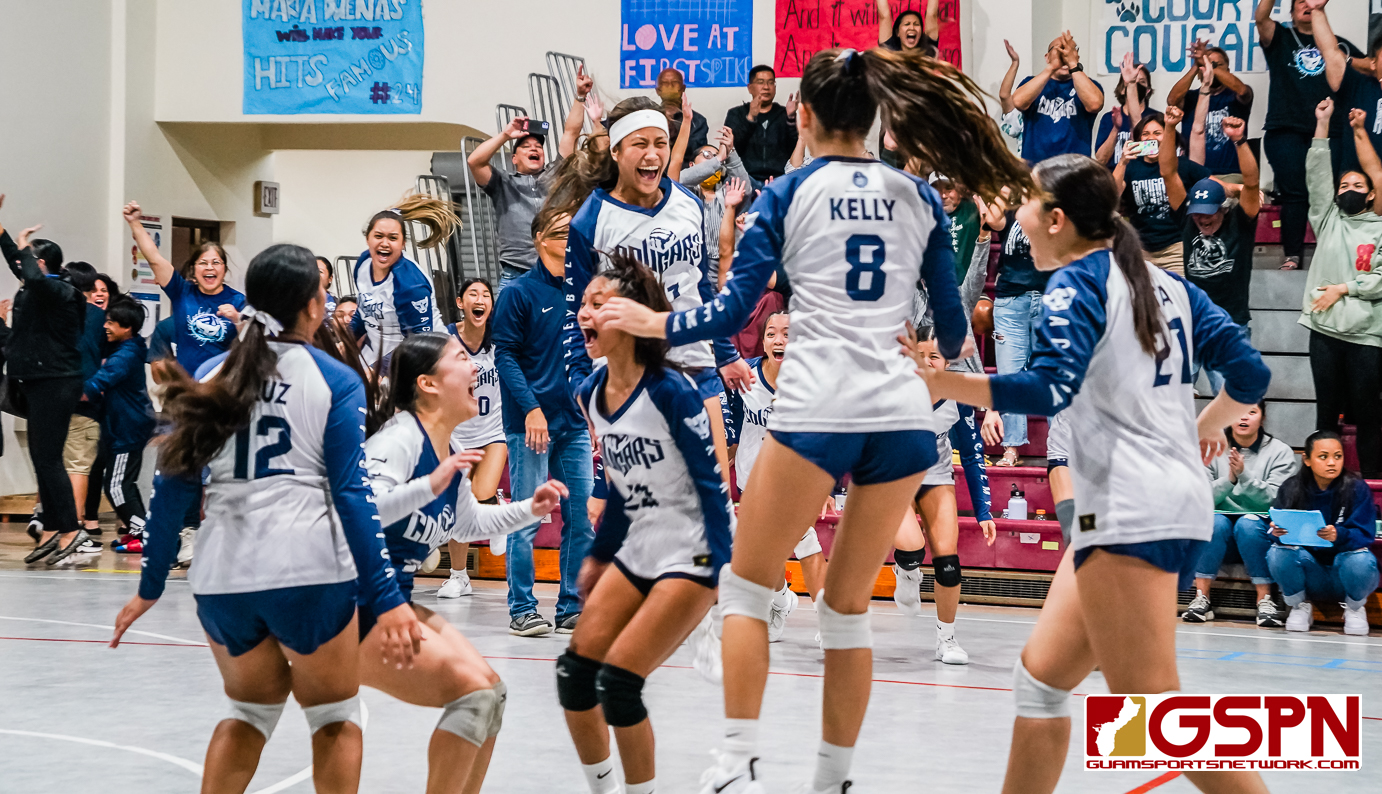 The Cougars will face their volleyball nemesis – the Notre Dame Royals, who swept past the Guam High Panthers in straight sets in Tuesday’s other semifinals. The championship game is slated for 7 pm Friday at the UOG Calvo Field House.

Academy sophomore Hinengi San Nicolas led the way for the Cougars with 10 kills and an ace with fellow sophomore and middle blocker Natasha Kelly adding seven kills and a block and senior Genice Torres added six kills and five aces.

“We played our game,” said San Nicolas regarding her team’s ability to overcome the two sets to one deficit. “We were all focused and we just had fun.”

“We stopped having fun and that’s why we started losing. I think the turning point was when the team decided as a whole to stop playing scared and to own the court.”

The Cougars started off on fire scoring the first nine points of the game behind Torres’s three kills, two aces from teammate Ariana Cruz, a kill from San Nicolas and a block Sophia Kelly. San Nicolas added another kill and an ace later in the set to extend the Cougars lead to 19-5.

The Knights had trouble getting things together throughout the first set. A service error by the Knights would ultimately give the Cougars the 25-13 first set win.

Knessa Davis served up an ace for the Knights on the very next play giving the Knights the 26-24 second set win evening up the sets at one a piece.

Both teams traded leads until the score was tied at 11-11. The Knights managed to put together a run, scoring six straight points behind two aces by Torres and a kill and block by Davis to put the Knights up 17-11.

Down 20-13, the Cougars made one last effort to cut into the lead scoring five straight points to bring the score to 20-18. But a hitting error by the Cougars followed by a huge kill from Davis rattled the Cougars to committing three straight errors to give the Knights the 25-18 third set win, putting the Knights one win away from advancing to the championship game.

After regrouping between sets, the Cougars went right back to work taking an early 7-2 lead behind aces from Torres and Reika Tenorio. The Cougars would later extend the lead after back-to-back kills from Tenorio was followed by a huge block from Gabriella Mata to make the score 12-6. The trio of San Nicolas, Natasha Kelly and Torres continued to power the Cougars adding to their respective stats and giving the Cougars their biggest lead of the set up 20-9.

“Our team captain Genice and our coach told us to lay everything out on the court because this could be our last game,” said Natasha Kelly. “So, we all just went in with the mentality to give it our all.”

With the Cougars up 24-16, the Knights made an effort to make one last push scoring the next three points, but a kill down the middle of the court by Natasha Kelley would put an end to rally and the set giving the Cougars the 25-19 fourth set win.

The fifth and final set was an instant classic as both teams fought back and forth as the lead exchanged multiple times to include the score being tied eight times throughout the set. With the score tied at 13-13, San Nicolas would send a shot from the back row that found an open spot on the court for her 10th kill of the game putting the Cougars on the brink of the comeback win. But a service error handed the ball back to the Knights with the score tied for the last time at 14-14.

“When the score was tied at 14, I was a little nervous of course,” said Torres. “But I composed myself and said the game was not over, we want it more, so I went in with more heart because I want to win for my team.”

A crucial service error by the Knights on the very next play followed by a mishandled ball of the block that landed in the middle of the court gave the Cougars the 16-14 fifth set win and propelled them into the championship game.

“I’m really proud of our team staying composed,” said Torres. “I know that last set got into our head a little bit, but we stayed calm, we relaxed and took a second during the timeout and composed ourselves.”

The top seeded Royals cruised past the Panthers in straight sets down in Talofofo. MVP-front runner Faith Piper dropped a game-high nine kills on the Panthers while teammate Seniayath Bell had a sensational stat line with five kills, seven aces and 21 digs. Setter Nyarah Paet set the tone with 15 assists.

Both ND and Academy finished the regular season at 8-1, but the Royals took the head-to-head. Records won’t matter as the championship game will be played on neutral ground Friday night at UOG.