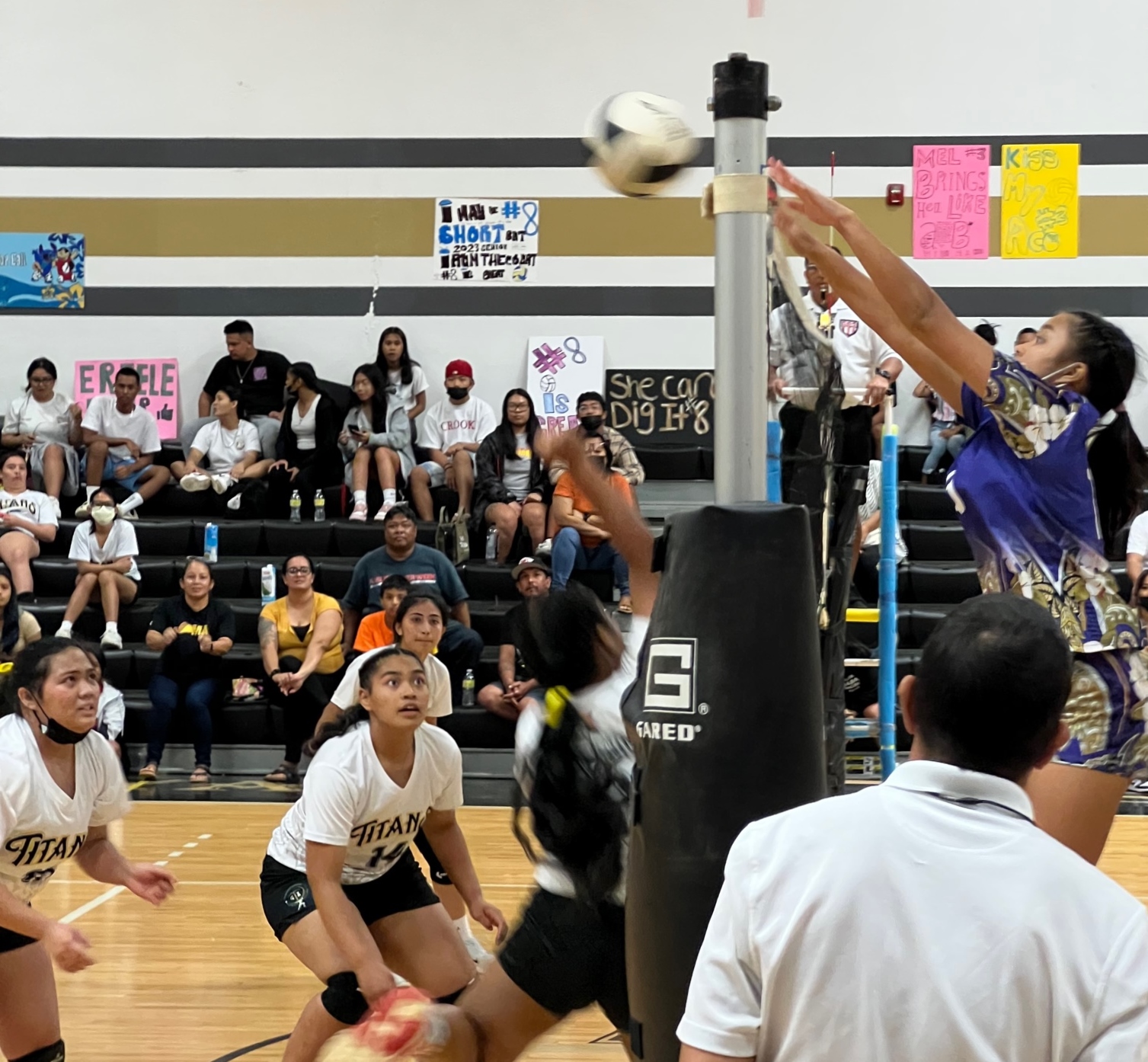 With the ISA Girls Volleyball season winding down, the GW Geckos strolled into the Barrigada campus Monday night to take on the Tiyan Titans. The Geckos defeated the Titans in straight sets 25-10, 25-23, 25-17.

Christine Bansil led the way for the Geckos with seven kills and two aces.

The Geckos, looking to make it an early night, jumped out to an early 7-1 lead as the Titans struggled to get on the same page.

Tiyan managed to cut into the lead after an ace by Mnelvi Rechim brought the score to 10-7 but that would be the closest the Titans would get in the first set.

Riding on the miscues by the Titans, the Geckos took the first set 25-10.

In the second set the Titans came out with a renewed energy with back-to-back kills by Cheifhanna Fredrick and Kaya Nededog and an ace by Fredrick to lead 4-1.

But it didn’t take the Geckos long to take the lead a kill by Cherese Flores tied the game up at 5-5 and an ace by Kamarin Guerrero followed by a kill from Flores put the Geckos up 8-5.

With the Geckos pulling away up 14-6, Tiyan received some much needed energy that sparked a run by the Titans that started after an ace by Eriele Salas.

The Tiyan went on to score nine straight points recording three straight kills from Nededog and three from Fredrick to regain the lead at 15-14.

Moments later the Geckos reclaimed the lead behind a kill from Elahna Gumataotao and two from Bansil to put the Geckos up 20-16.

Later in the set, down 23-20, the Titans made one last push brining the game within one point behind back-to-back kills from Natalie Mortera and Giada Findish.

The Geckos would hold on to take the second set 25-23 after a service error by the Titans.

In the third set the Geckos turned up the heat putting on a scoring clinic scoring six of their first 10 points off kills to jump to a 10-4 lead. Bansil would be credited with four of her seven total kills in that span.

“Our team chemistry plays a big part in our success,” said Bansil. “Along with our coach guiding us and correcting our mistakes, it’s our chemistry as a team that makes us successful.

Later in the set, with the score now 20-10, the Titans tried to reignite the spark they had in the second set after back-to-back kills by Zoey Indelacio and Fredrick cut the lead to 21-15.

But it was too little to late for the Titans and the Bansil sealed the deal with her second ace of the game giving the Geckos the 25-17 third set victory.

With the playoffs approaching, the Geckos are looking to put the final touches in their team’s preparation for their title defense.

With the win, the Geckos improve to 9-2 with one game remaining in the season while the Titans finish their season at 1-11. The Titans have a bye for the final regular season scheduled game day.