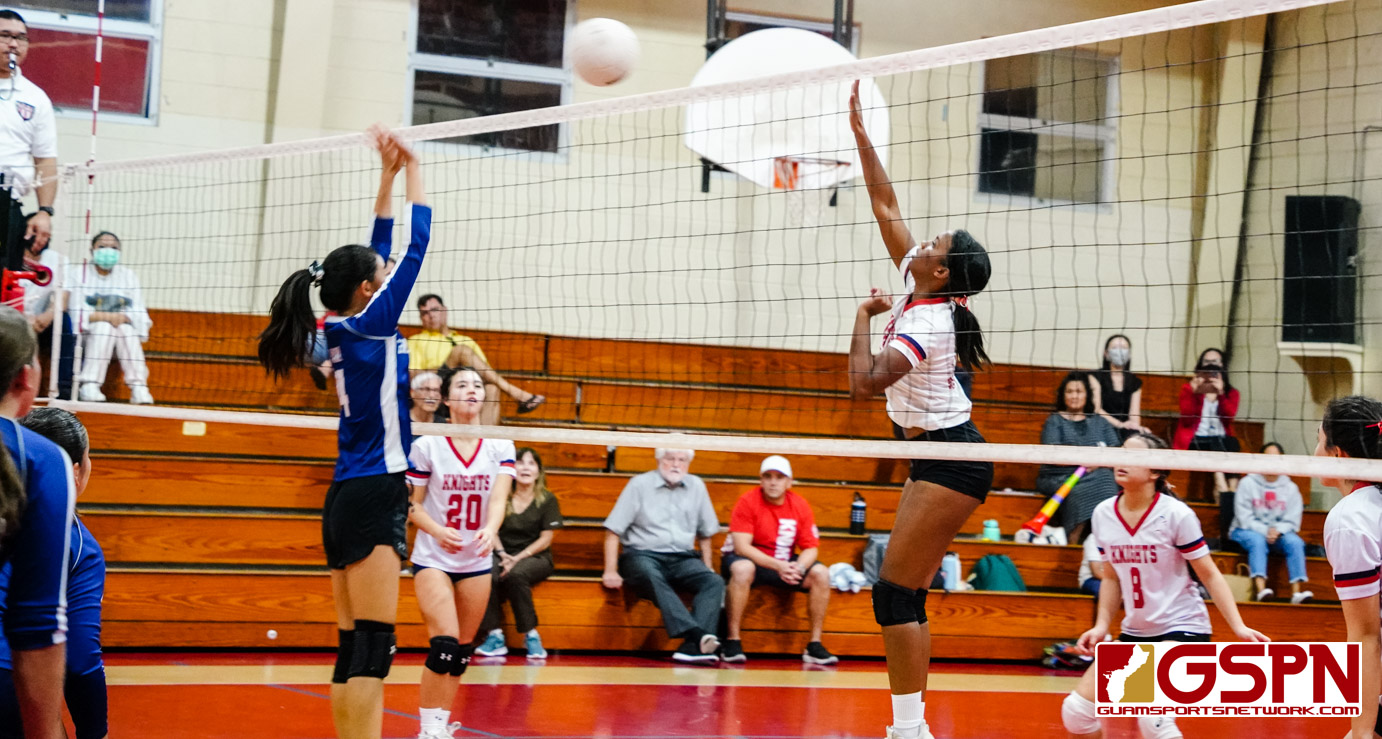 Knights outside hitter Shihori Fujisaki had a monster game with 10 kills and three aces while teammate and middle blocker Knessa Davis added six kills and an ace for the Knights.

“I think we really wanted to win especially knowing that they (Harvest) wanted to come here and beat us,” said Fujisaki. “To defend our home court and win was what motivated me and helped me to get those 10 kills.”

“I also felt really good about my performance tonight,” added Davis. “Even with my few service errors, I feel really good with the six kills I had.”

The Knights had a lot of motivation heading into the game as both teams added another chapter to their rivalry.

“We knew that Harvest really wanted to beat us so we just played the game the way we knew we should play it. Especially since we really want to win the championship.”

Fujisaki went to work early for the Knights helping her team jump to an early 5-1 lead with back-to-back aces.

The Eagles struggled to get things going early in the first set committing multiple hitting and serving errors that helped the Knights to a 19-10 lead.

With the Knights up 23-12 following a kill by Fujisaki, the Eagles answered back with a kill by Brianna Dolan which looked to give her team a spark.

But back-to-back kills from Fujisaki and Davis put an end to their hopes and the first set giving the Knights the 25-14 first set win.

Things looked promising for the Eagles in the second set jumping off to a fast 3-0 lead after Risa Ahn led off the game with an ace and teammate Madi Moyer had two big back-to-back blocks which seemed to spark the fire the Eagles needed.

With the Eagles up 6-5, the Knights Ella Wigsten led her team on a run scoring six straight point including two kills and an ace by Wigsten.

The Knight continued to extend their lead 19-10 taking advantage of the Eagles errors.

Down 22-12, the Eagles made one last run at closing the gap with two kills from Dolan and an ace from Olivia Haddock to bring the score to 22-16.

The second set ended after a service error on the Eagles gave the Knights the 25-18 second set win.

Despite being down two sets to none, the Eagles continued to battle jumping off to another early lead with Eagles Isabella Sunga came up with two straight aces followed by a kill from teammate Patricia Cassidy to lead the set 4-0.

But Fujisaki put a stop to the short run sending a shot between two defenders for her sixth kill of the game. She followed the kill with her third ace of the game.

Later in the set, with the Knights up 21-20, two hitting errors followed by a kill from Davis put the Knights at game point with a 24-20 lead.

The Eagles put one last attempt at a comeback when Moyer and Cassidy provided back-to-back kills to bring the score to 24-22. But that would be all the Eagles could do when a hitting error gave the Knights the 25-22 third set win and the game.

“I thought we played really well tonight; the girls stepped up and played really well,” said Knights Coach Chris Shepherd. “There’s always things to work on but we’re getting there, we just continue to work hard at practice, and the remaining games and we’ll peak at the right time.”

For the most part, Shepherd left the game to his players to control. Having confidence that his team would be able to get out of situations, this confidence in his team helps drive their success.

“I feel like the coaches really trust us to handle our plays,” said Fujisaki. “It’s good to know they have confidence is us.”

With the win, the Knights improve to 6-4 while the Eagles drop to 5-6.