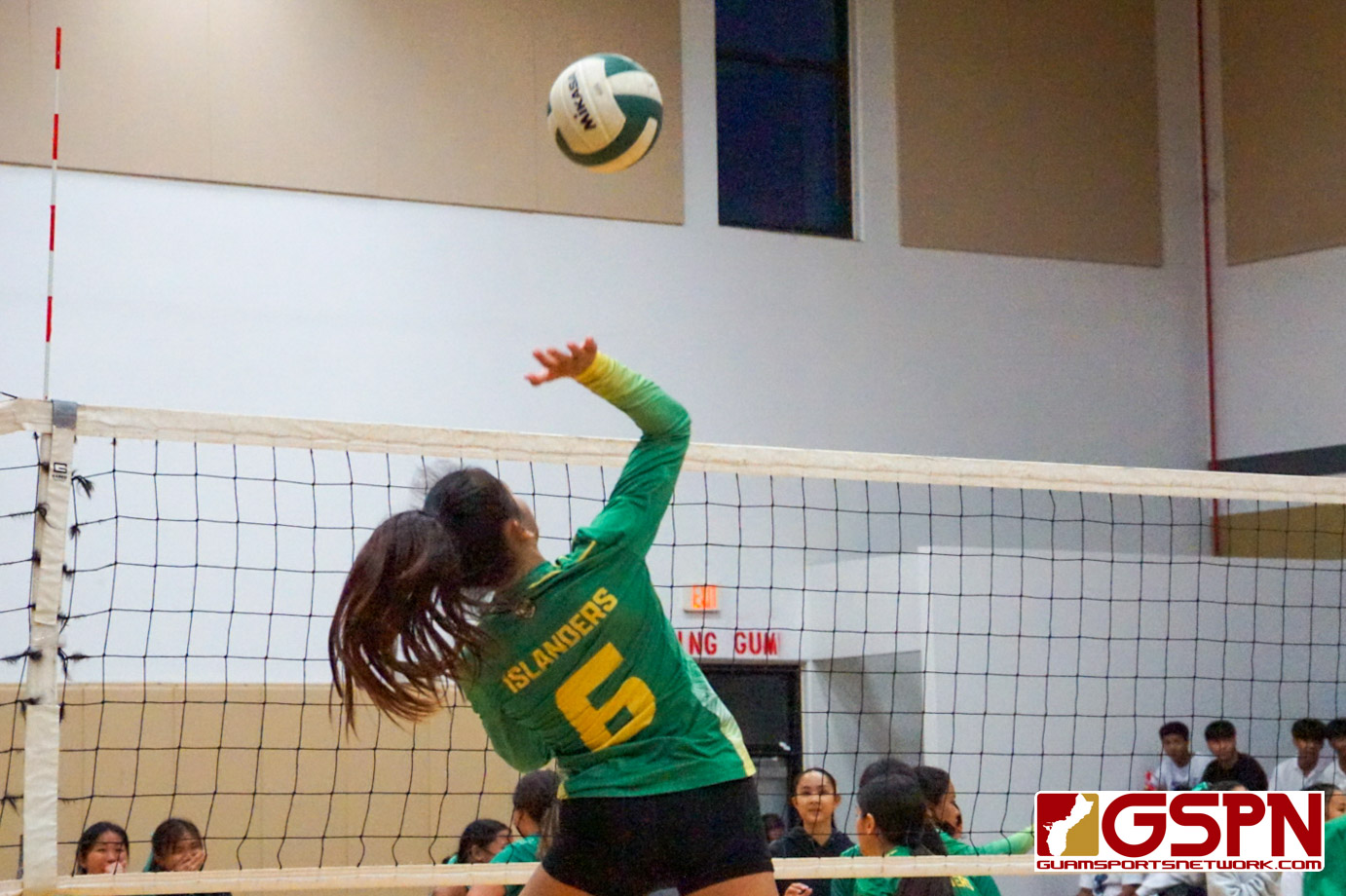 The Interscholastic Sports Association Girls Volleyball League action continued Monday as the John F. Kennedy Islanders strolled onto the Tiyan campus to take on the Tiyan Titans. The Islanders defeated the Titans in straight sets 25-16, 25-20, 25-18.

Islanders middle blocker Alessandra Pagdilao led her team with four kills and three aces playing only the first two sets and teammate and outside hitter Jae Almonte added three kills and an ace all in the third set.

The Islanders took the early 6-2 lead in the first set behind an ace by Jodee Halili and a kill from Philicita Rivera and extended the lead to 11-5 behind back-to-back aces from Pagdilao.

Tiyan had a brief run of their own, cutting into the Islanders lead by taking advantage of multiple errors to bring the Titans within two down 13-11. Later in the set with JFK up 19-15, Pagdilao served four straight times recording her third ace of the game and bringing the Islanders to set point with the score 24-15.

The Titans would score a point on a kill by Kaya Nededog who placed a shot in the center of the court in an attempt to rally her team.

On the very next play, a hitting error on the Titans would give the Islanders the 25-16 first set win.

2nd set
JFK jumped out to an early 3-0 lead until Tiyan’s Zoey Indalecio, from the left side of the court, sent a cross court shot to the right corner dropping for the kill to end the Islanders run. Indelacio followed up her kill with an ace to cut the Islanders lead to 3-2.

But the Islanders again went on a run with Pagdilao starting things off with a kill of her own. Teammate Tommie-Lyn Santos added an ace that put the Islanders up 9-3. Midway through the set the Titans sprang to life making a run of their own.

Down 17-13, the Titans took advantage of the Islanders hitting errors to tie the game up at 18-18 behind a kill from Gaida Findish and an ace from Gabrielle Quichocho.

But that would be as close as the Titans would get to taking the lead as the Islanders would go on to
score the next six straight points, recording kills from Pagdilao and Maria Calvo to bring the score to 24-18.
After the Titans added two more points, a service error gave the Islanders the second set win 25-20.

3rd set
The Titans continued to struggle in the third set committing multiple hitting errors and allowing the Islanders to take an 11-5 lead early on in the set.
The Titans would get some help to cut into the Islanders lead with a kill and an ace by Findish and a kill from Indalecio to bring the score to 11-9.

The Islanders extended the lead for good going on a 7-1 run to extend their lead 18-10.

Though the Titans continued to fight their way back, closing the gap to 22-18, JFK scored the final three points to give the Islanders the 25-18 third set win and the game.

The Islanders’ Pagdilao was pleased with her team’s performance, noting that her team mentality was much better than previous games to include the team’s ability to pass the ball.

“We did a really good job,” added Almonte. “I love the effort we put out tonight; The hustle and communication were really good.”

Almonte, who is a role player, scored all three of her kills and her ace in the third set.

“I was nervous when I was entering the game, but I told myself not to be afraid and to push myself to do my job,” said Almonte. “I think I did pretty good today.”

Though the islanders were able to win the game in three set, both Pagdilao and Almonte agreed that there’s still much to work on to prepare them for a run at the playoffs.

“There’s things we definitely need to work on, but we are taking it one game at a time,” said Pagdilao. “Even with the work we still need to do, I think we are peaking at the right time,” added Almonte. “Our
coaches push us to do our best and we did tonight.”