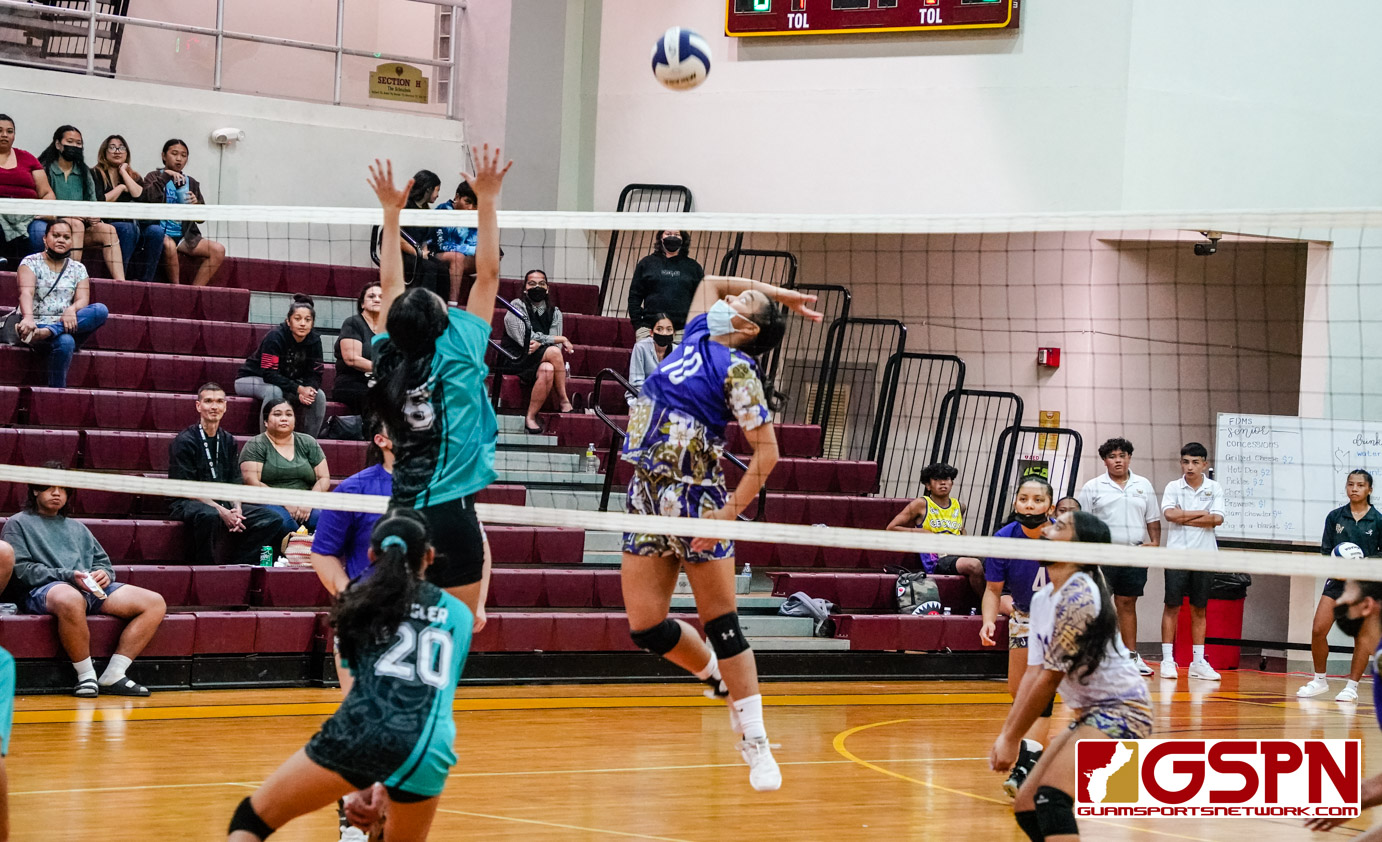 The Dolphins strolled into Mangilao with one goal in mind, defeat the two-time defending champion Geckos, a goal that looked achievable early in the game.

During the first set, the Geckos and Dolphins exchanged points for most of the set as they struggled to put the ball in play. Both teams combined for 14 services errors. But it was the Geckos who struggled to get a rhythm going and the Dolphins took advantage of the miscues.

Late in the first set after back-to-back service errors by each team knotted the game up at 22-22, Southern’s Maria Vegafria’s kill followed by an ace put the Dolphins at set point.

Middle blocker Tasi Naputi would come up big with a huge block to give the Dolphins the 25-22 first set victory.

“We played sloppy,” said Geckos coach Bobbi Quinata on her team’s first set loss. “I’m not going to take away the first set win by Southern. Hands down that was their set.”

Things began to change for GW as they jumped out to an early 2-0 lead after a kill by Isabella Uncangco.

Southern would then score two straight points to tie the game at 2-2 with a kill by Naiyah Taimanglo and an ace by teammate Brielle Naputi. The Dolphins then committed three straight errors to give the Geckos a 5-2 lead; a lead they would not lose for the remainder of the set.

Capitalizing on Southern’s errors, outscored the Dolphins 11-3 to extend their lead to 19-10. The Dolphins would make one last effort to close the gap after a kill from Elecia Paulino and back-to-back aces from Tasi Naputi cut the lead to 19-13.

The teams would exchange points for the first part of the set until a kill by Guerrero tied the game at 9-9. With Ursula Ziegler at the service line, the Geckos went on to score 11 straight points off Dolphin errors and Ziegler recording two aces in that span to give the Geckos a huge 20-9 lead.

The Dolphins would respond with back-to-back kills by Tasi Naputi and Halie Sanchez and an error on the Geckos to cut into the lead.

But the Geckos would outscore the Dolphins 5-2 to give the Geckos the 25-14 third set win.

The Dolphins continued to fight, jumping to an early 2-0 lead with kills by Naputi and Paulino.

But it was Guerrero that led the way for the Geckos who took control of the game and extended their lead to 10-5 with Guerrero recording a kill and an ace.

Naputi, who was a workhorse for the Dolphins throughout the game, recorded her seventh and eighth kills of the game cutting into the Geckos lead 15-12.

With the Geckos up 19-14, Guerrero took charge recording her ninth kill of the game sending a shot off the blocks and out of bounds for the point. This led to the Geckos scoring four more points to include a huge block by Guerrero.

GW would score the final point off a service error by the Dolphins to secure the fourth set win and the game.

Even with the loss, Southern had great output from Naputi and Paulino who had eight kills each. Naputi also added three aces.

“Honestly, in the first set we were slacking off a lot,” said Guerrero. “In the second set we realized that we wanted it more. We cannot be complacent with any team; we need to continue to do our best and put our best efforts out every single game.”

Though Geckos Coach Bobbi Quinata was not pleased with her team’s first set performance, she noted that the pressure to defend the title and attain a three-peat is a lot on her team but that staying hungry and focused was key.

“Hands down there’s a lot of pressure on them…and they’re losing focus and I told them time after time that I can take them to the top, the problem is can they stay there.”