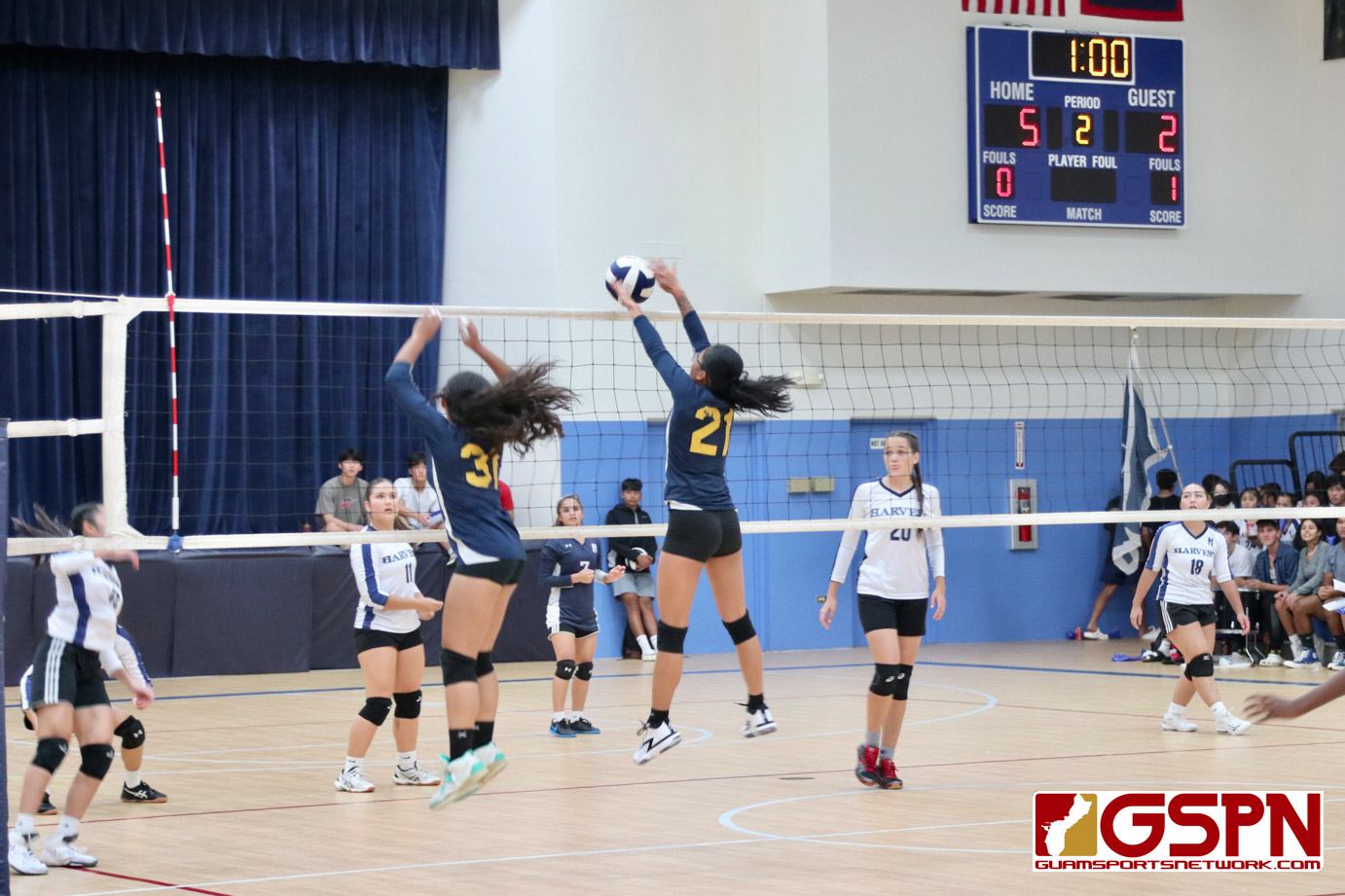 1st set
The Panthers looked poised to make it an early night as they strolled into the Toto campus to take on Harvest, but the Eagles had other plans.

Guam High dominated the court from the start scoring six straight points behind an ace by Jaelah Payne and two powerful kills from freshman teammate Anne Marie Sablan. The run would end with a kill by Dolan giving the Eagles their first point of the game with the Eagles scoring the next two points to cut the Panthers lead in half at 6-3.

But Sablan put a halt to the Eagles momentum with her third kill of the game which she placed just beyond the 10-foot line.

The Panthers would then go on to score the next six points off the Eagles hitting errors to extend the lead to 13-3.

Harvest continued to struggle in the set as the Panthers outscored the Eagles 12-5 to take the first set in dominating fashion 25-8.

2nd Set
The Eagles looked to turn things around with two straight points off the Panthers hitting errors followed by three straight aces from Lia Park to give the Eagles the early 5-0 advantage.
Later in the set with the Eagles leading 12-5, Sablan’s fifth kill of the night followed by a kill from teammate Cierrah Herrera helped cut the lead to 12-9.
After a service error gave possession back to the Eagles, Cassidy would strike with back-to-back aces extending the lead to 15-9 with the home crowd fired up.

But the Panthers responded quickly with Sablan leading the charge.

After back-to-back errors by the Eagles cut the lead to 15-11, Sablan would come up big for the Panthers from the service line scoring three of the next four Panther points off aces to tie the game up at 15-15.
With the Eagles up 19-17, the Panthers would go on another scoring run to give them the lead 23-19. A lead which they would not lose as Herrera’s hit was mishandled off the block landing on the Eagles side for the 25-23 second set win.

“We had no energy in the first two sets,” said Dolan. “I wanted them to stay positive and to have a positive mindset and to stay focused”

3rd set
But things looked to go the way of the Panthers to start the third set as a kill from Gabriella Penry and two kills from teammate Brianna Franklin gave the Panthers a short 3-2 lead.

With the score tied at 4-4, Cassidy went to work powering the Eagles to an 8-0 run with five aces to push the Eagles to a huge 12-4 lead.
Later in the set with Harvest up 20-15, the Eagles outscored the Panthers 5-2 behind freshman Niesha Chen’s three kills to give the Eagles the third set win 25-17 and pushing the game to a 4th set.

4th set
With the momentum on the Eagles side, Dolan recorded her second kill of the game giving the Eagles a 3-1 lead.
The lead would exchange throughout the set with both team holding the lead for brief stints at a time with no team leading by more than four points.

The Panthers up 18-17, with the supporters from both teams swapping cheers, gained the upper hand when setter Sophia Fernandez tipped the ball over two Eagles defenders scoring the point and forcing the Eagles to call a time out with the Panthers up 19-17 and the momentum.
Coming out of the time out, the Eagles Cassidy sent a shot from the right-side landing just inside the right corner for the kill. The Panthers would then make back-to-back hitting errors giving the Eagles the 20-19 lead.

On the next play, the Eagles got a huge point from middle blocker Madi Moyer as her shot hit off the outstretched arm of a Panther player and out of bound for the lead.

The Panthers would commit back-to-back hitting errors giving the Eagles a 25-22 win and pushing the game to a fifth and final set after being down two sets.

5th set
With the game now tied at two sets apiece and both fan bases making their presence known, the Eagles jumped to an early 5-2 lead behind Dolan’s third kill and an ace by teammate Isabella Sunga.

“We have a very supportive spirit club, and they tend to come to every game so we were used to the noise. Today they were extremely loud which was good for us.”

But the Panthers would shift momentum going on a 7-1 run behind Sablan’s 9th kill of the game to give the Panthers a 9-6 advantage.

“We just kept encouraging everyone to keep pushing, that we could do this,” said Cassidy. “Honestly, I think our mindset is what helped us tonight. Being so close as a team, knowing that we could get the ball over and win the game is what really saved us.”

“I just didn’t want to think of the score at that point,” said Nolan. Adding that I just wanted to think “one point at a time.”
Coming out of the time out, the Panthers would respond with a kill from Elisabelle Maratita to put the Panthers at game point 14-11.

But that would as far the Panthers would go as the Eagles Dolan would record her fourth kill of the game and swing the momentum back to the home team.

Back-to-back errors by the Panthers would knot the game up at 14-14.

The excitement of the game brought student supports from both teams on their feet ready to storm the court in celebration.
It would be the Eagles fan base who would get to celebrate as an ace by the Eagles Park and a hitting error by the Panthers would complete the comeback and propel the home team to the 5-set victory.

“I like where we’re at right now,” said Nolan. “I think if we play the way we did toward the end of the game, I think we have a really good chance.”

“I think there’s always room for improvement,” said Cassidy on where she see’s her team’s progress at this point in the season. “We have a couple of injured players right now, but we had our role players stepping in and they pulled through.”

Nolan also gave a lot of credit to the first-year varsity setter stating that, “she (Cassidy), is a very hard-working player; she hustles so much, and I think that she’s really good at her position.”

Eagles head coach Kyle Eckert was pleased with the outcome of the game and his team’s ability to stay focused even down two set. “I’m glad we gave everyone their monies worth.”

Though the game didn’t go the Panthers way, Panther’s standout and freshman Anne Marie Sablan gave the Panther faithful a lot to cheer about all game long. Sablan ended the night with an impressive 10 kills and 4 aces.

With the win the Eagles improve to 5-3 for the season while the Panthers fall to 2-5.