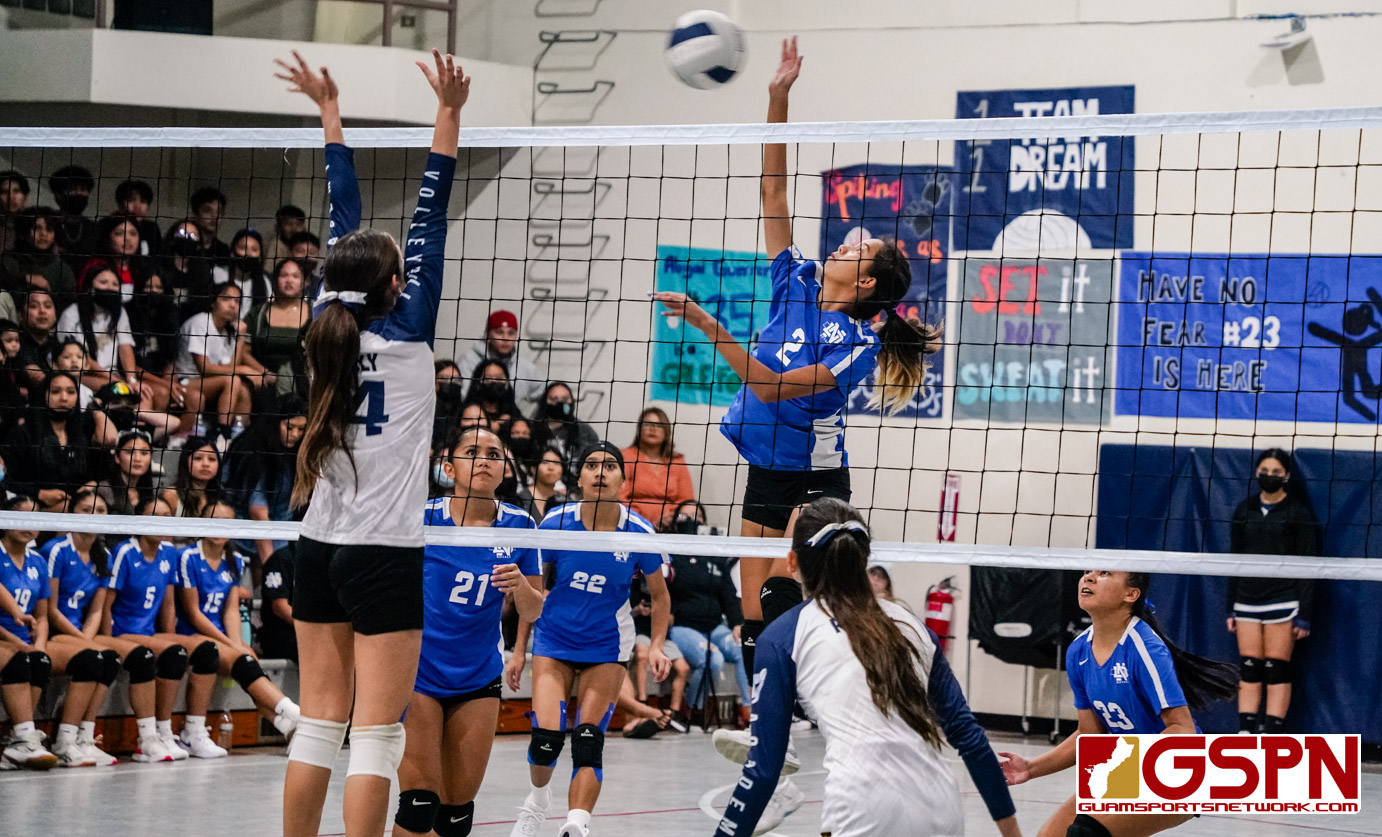 A packed Academy of Our Lady Gym witnessed the battle of the unbeatens between the visiting Notre Dame Royals and the Academy Cougars in the IIAAG Girls Volleyball league game Tuesday night with the Royals handing the Cougars their first loss of the season 25-22, 25-20, 24-26, 25-22 with a four-set victory.

Royals outside hitter Faith Piper led the charge with an astounding 21 kills and four aces for her team.

“We knew we were both undefeated and that everyone was going to show up because of last year,” said the senior Royals star.

“We knew it was going to be crowded and loud but we managed to cancel out all the noise and just focus on the game.”

The game started off with both teams exchanging points tying the game up at 3-3 until the Royals put on a short 8-3 run behind a pair of aces by Nyarah Paet and two kills and an ace by Piper to give the Royals an 11-6 lead.

The Cougars would come roaring back with a 7-0 run of their own behind kills from Genice Torres and Natasha Kelly to take the lead 13-11.

The Cougars led 16-14 when a kill by Piper ignited another run for the Royals outscoring the Cougars 7-0 with three points coming off Piper’s kills bringing her total to five for the set and her team up 21-16.

With the Royals at game point and the Cougars serving, a service error would give the Royals the first set 25-22.

The Royals, feeding off the momentum from the first set, jumped out to an early 7-1 lead to start the second set. They would later extend the lead to 15-7 behind a pair of kills and an ace by Piper, and ace from teammate Mercedes Cruz and a kill from teammate Seniayath Bell.

Later in the set, with the Royals up 23-20, back-to-back hitting errors by the Cougars would give the Royals the second set victory 25-20.

The third set would be a different story for the Cougars who took the early 3-1 lead behind a kill from Hinengi San Nicolas. The Cougars would lead for most of the set until the Royals, down 15-12, scored four straight points behind a kill from Jaeana Lizama and an ace by Cruz to give the Royals a one-point lead 16-15.
The Cougars would regain the lead at 23-19 when the Royals would put another run scoring five straight points behind another pair of kill from Piper and an ace by Lizama to put the Royals at game point 24-23.
But the Cougars would answer right back tied at 24 apiece when a Sophia Kelly kill would put the
Cougars at set point up 25-24.
A hitting error by the Royals on the next play would give the Cougars a 26-24 third set win sending the game to the fourth set with the Royals still leading two sets to one.

In the fourth set, both teams again exchanged point for point, but it was Piper’s six kills and two aces in the set that powered the Royals.
With the score neck and neck at 21-21, a passing error by the Cougars followed by an ace by Bell and a kill by the Eliana Benavente would put the Royals at game point at 24-21.

The Cougars looked to stay alive after a kill by San Nicolas cut the lead to 24-22, but it would be Piper who would have the last say as she sent a shot that landed just inside the end line for her 21st kill of the night and giving her team the 25-22 fourth set victory.

“We knew it was going to be a challenge, but we practiced for it, and we played how we know how to play, and we pulled through,” said Piper after the win. “Right now, we are doing good, but we know that there’s always room for improvement. Every game and every practice we’re just working to improve every time we see a different team.”

Asked if her team’s goal is to go undefeated, Piper stated that, “Yes, that’s definitely the goal for us and we’re working toward that goal, but we know we need to get better every game and every practice.”