The Sanchez Sharks handed the JFK Islanders their first loss of the season Wednesday at the Okkodo Field. 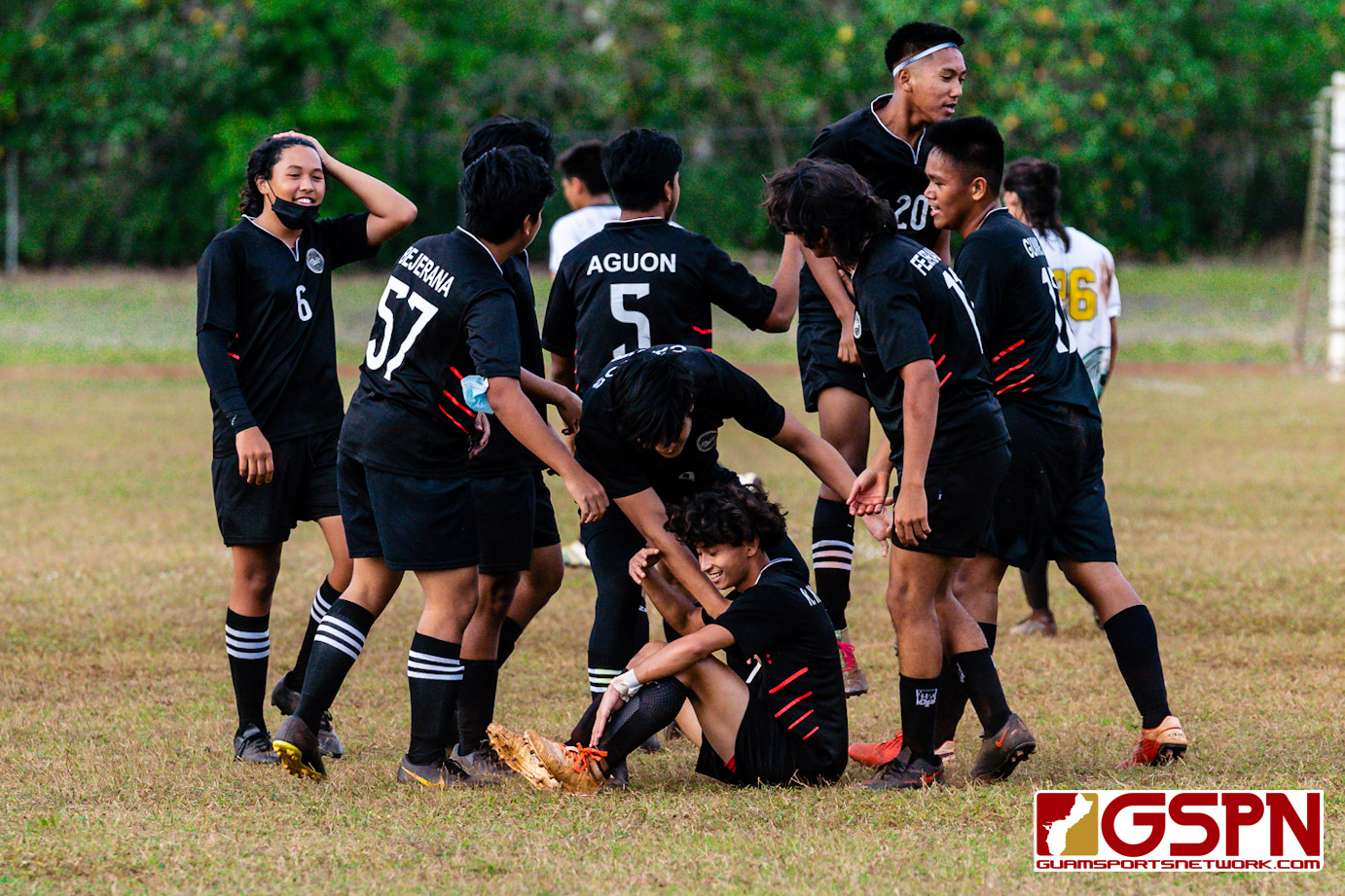 The Sanchez Sharks handed the JFK Islanders their first loss of the ISA Boys Soccer Season Wednesday evening at the Okkodo Field after a second half spurt from the Sharks propelled them to a 3-2 victory. Wednesday’s showdown started off with a frantic pace as three goals were scored in the first 10 minutes, only to have it end with a game-winning goal in the 89th minute.

Trailing 2-1 at halftime, the Sharks offense played more controlled in the second half which set up the dramatic ending. The Islanders were called for a handball off a corner kick which set up a penalty kick for Marvin Ednaco in the 68th minute. JFK made a keeper swap from Josh Park to Mason Bonner for the PK, but it didn’t affect Ednaco as he nailed the shot to tie the game at two goals each.

“I wasn’t phased at all and I didn’t switch my mindset despite them switching keepers because if I think too much about it I think I’d shank it. I pretended it was the same [person],” said Ednaco on his momentum changing PK.

Both teams ramped up the intensity towards the finish, but none more than Ednaco and KK Kaminanga as Ednaco got a break away situation which he used to set up Kaminanga. Once Ednaco saw JFK’s Park commit, Marvin used one tap to lead Kaminanga for the game-winning goal in the 89th minute.

“I really thought he was going to take the shot, but Marvin is such a team player so I had to be there to rebound if anything, but he saw the keeper come out and he found me,” said Kaminanga.

Ednaco had thought about scoring, especially since he saw the media cameras keying in on the play, but he opted to make the smarter play which would prove to be the biggest goal of the game.

“I saw the whole defense shift to the other side so once I got that ball, I did think about shooting it because you know I saw GSPN, but then I remembered that in the Southern game I missed five shots and we ended up tying against them. So I saw KK and saw he was onside and just passed it to him,” said the spritely Ednaco.

Sanchez’s John ‘Johnny Boi’ Medina wasted no time by scoring the games first goal in just 33 seconds into the match.

JFK responded right away as Josh Benavente took a pretty cross from teammate Andrew Choi, scoring the games second goal for a 1-1 tie at the 2-minute mark. JFK scored just moments later as Taiyo Kanekatsu scored a contested goal to put his team up 2-1.

Aside from the early goal from Medina, the Sharks offense couldn’t get into rhythm in the first half as JFK controlled the ball for majority that half. After talking it over at halftime, the Sharks came out like a different team by dominating possession and shot opportunities which presented the late-game chances that won them the game.

“We were talking about how much faster [JFK] was playing than us so we just dropped back on defense and knew that our offense was capable of scoring,” said Ednaco.

The Sharks don’t plan on celebrating the win for very long as they’re focused on finishing the season strong as the playoffs approach. Winning against JFK Wednesday will serve as a reminder that winning the league title is in their grasp.

“Our whole team has been working so hard and they beat us earlier this season 5-2, but this game we came out not afraid It feels good, it’s a big win, but it’s not done yet. We’ve still got the rest of the league to get through before we can think about challenging [JFK] again,” said KK.

Shaping up for the playoffs

JFK will still retain the leagues top spot with just one loss, but the Sharks have grabbed hold of second place with the regular season set to end this Friday. Sanchez will face off against the Southern Dolphins while JFK will host the Tiyan Titans. Only the top four seeds will advance into the playoffs with Okkodo locking in the #3 seed.