STARS CRUISE PAST BOMBERS IN BATTLE OF THE UNBEATENS 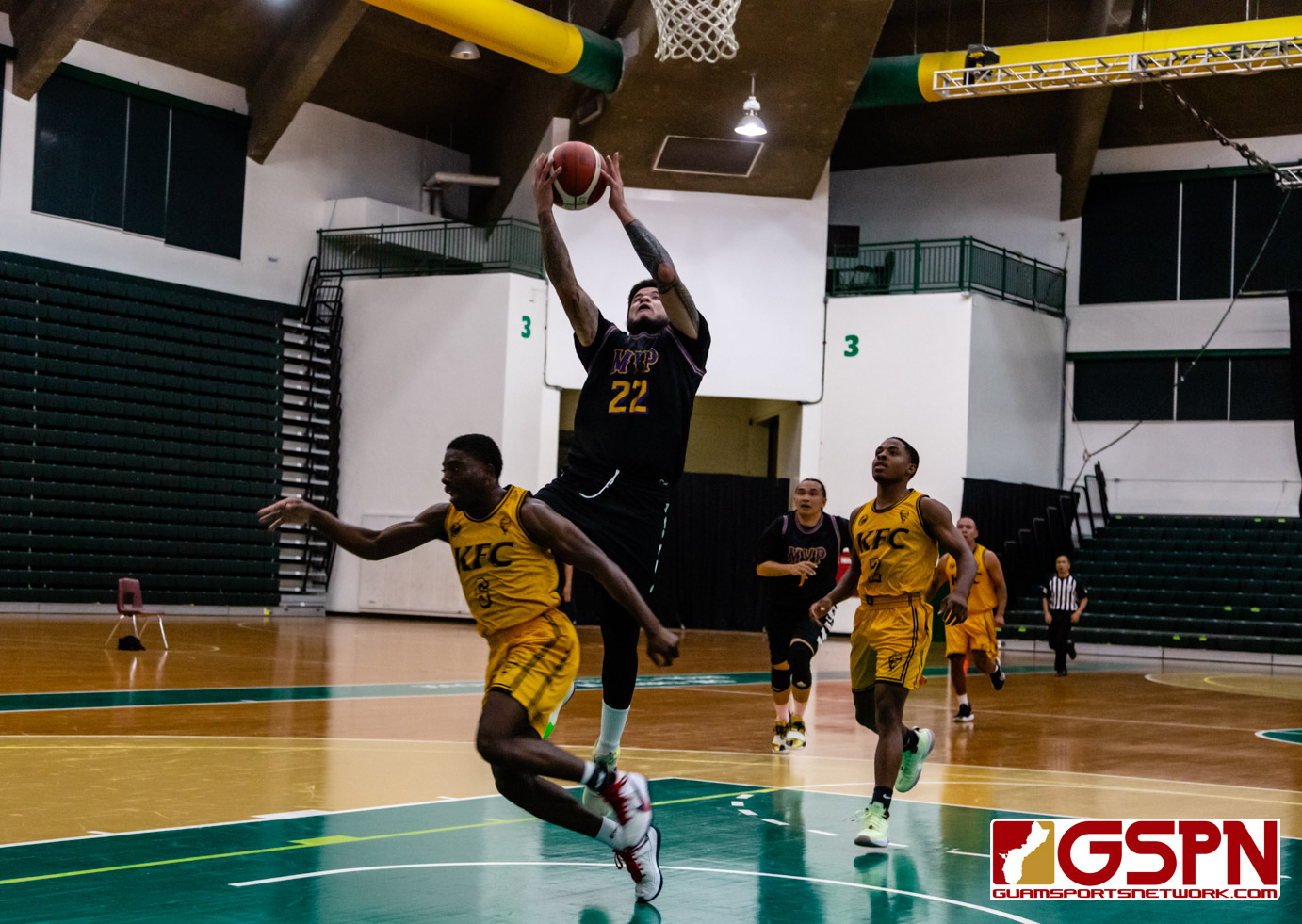 In a much-anticipated showdown between the MVP Stars and KFC Bombers, the Stars jumped out to a huge lead and never looked back, cruising to a 99-77 win Wednesday night in the Tritons Basketball League at the UOG Calvo Field House.

Both teams came into the game with 3-0 records after pushing through the competition. After years of succumbing to the Bombers and despite having only seven players suit up, MVP dominated from start to finish led by Joe Blas’ huge 37-point game.

“We have played the Bombers for many years and they’ve always had the advantage of being bigger and more athletic,” Stars player/coach Jin Han said. “Tonight, we wanted to pack it in and make them beat us from the outside. We did a good job of rebounding and using our speed in transition. Our guys played well and stuck to the game plan.”

MVP jumped out to a 13-0 lead from the start as guard Darren Hechanova drove his way to eight of his 19 points for the quick leap ahead. KFC didn’t get on the board until nearly halfway into the opening quarter on a Piere Collie offensive putback.

“We just came out and played hard,” Hechanova said. “We have a lot of players who can run up and down the floor.”

“Our main objective was to lock down on defense. Offensive, we’re not too worried about. We have a lot of offensive scorers.” – Stars Darren Hechanova

The swarming MVP defense limited the high-powered Bombers offense to just 19% shooting in the first half: 7-of-24 in the first quarter and a dismal 2-for-24 in the second.

KFC came as close to the lead at 15-10 late in the first, but Hechanova and J.P. Cruz guided MVP to their largest lead of the game, doubling the Bombers 42-21 leading into the halftime score of 44-25.

The Bomber awoke in the third quarter, finally finding an offensive groove. Unfortunately for them, Joe Blas was there to deny any such comeback with Joe Blas countering time and time again. Blas would score 19 points in the third quarter alone, dashing any hopes of a KFC comeback.

Blas knew how important it was for his big buckets to stop any momentum from their opposition.

“Those (shots) were very important,” the Guam National Team stud said. “We had a short bench (tonight) so the longer the game goes, it’s a disadvantage for us. So for sure we wanted to blow that lead up or sustain that lead. That put the game away quick.”

The Stars shot 47% from the field, including 61% in the final quarter to seal the deal. The Bombers shot a much better 44% in the second half as opposed to their dismal 19% in the first half, a half in which they missed their first nine shots of the game and the final 17 shots heading into halftime.

“Usually, Andersen plays hard, so I expect them to bounce back the next game,” Blas added.

Cruz added 18 points for MVP with Vince Estella chipping in with 10.