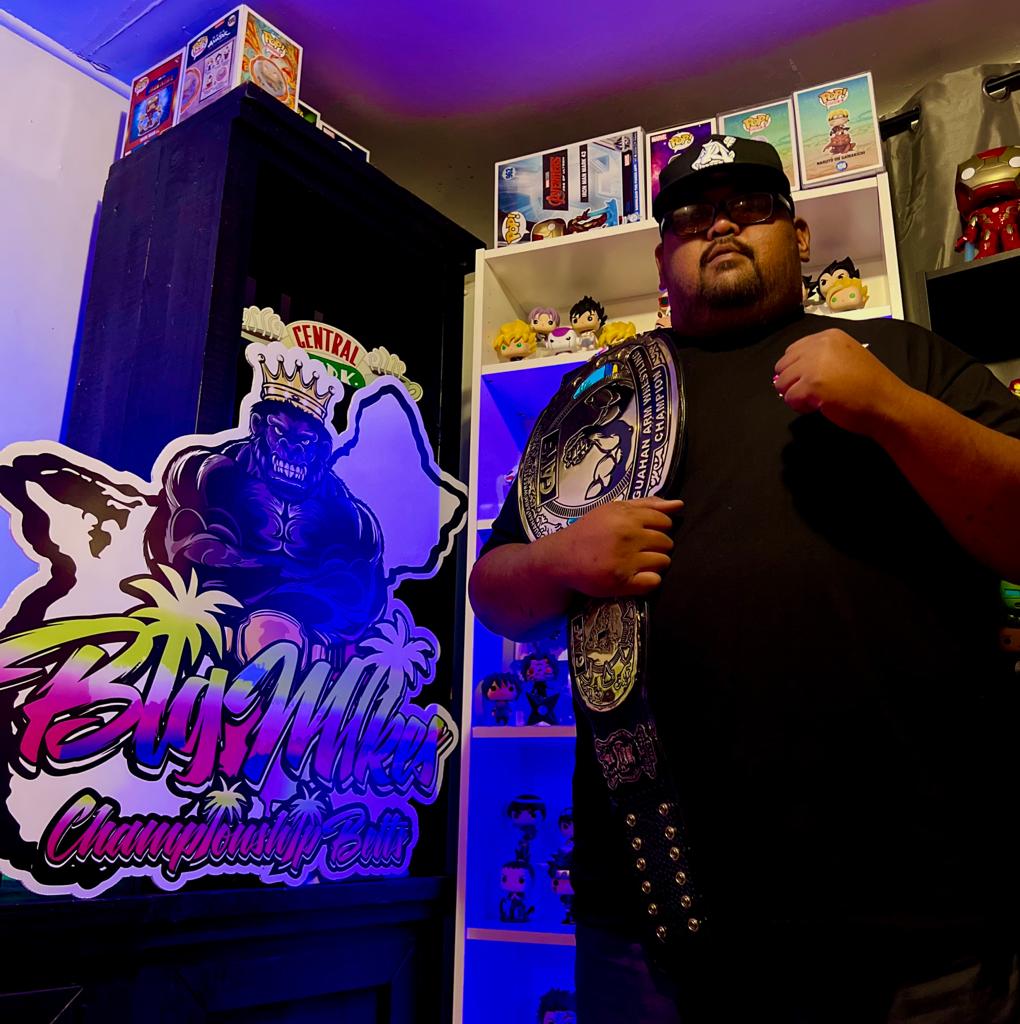 The championship belt. A symbol of triumph, hard work and accomplishment.

Most common in the fight game – either boxing, pro wrestling or mixed martial arts – the ‘championship belt’ resonates amongst sports fans young and old.

There was no better feeling as a kid for Big Mike than to see his favorite pro wrestler Hulk Hogan lift that World Wrestling Federation championship belt sweaty and bloody (fake or not) after a huge match.

“Those were the days!,” Taijeron remembers. “The champ would wear it around the waist or over their shoulder. Where ever they went, that championship belt went with them. It was a symbol of strength and hard work, and I respect that.”

Big Mike remembers making his first championship belt out of cardboard at the age of 5.

“Then one day my parents surprised us with a kid’s championship belt! It was plastic, but we didn’t care, we were so excited. It was the same belt Hulk Hogan had. For fun back then, my dad would get my mom, my little brother, and me to watch boxing and WWF wrestling on TV. It was a family thing we did every week and after the matches, we would wrestle or box. Tag team matches with my dad and my brother vs. me and my mom or vice versa. This would all go down in our family living room, and whoever won would get that championship belt! That’s how my love and respect for the championship belt all started.”

Growing up playing baseball and football, practicing karate and swimming, Taijeron had his share of trophies, plaques and medals, but it was that championship belt that has always caught his eye – and heart.

Taijeron’s passion for belts turned into a collection and borderline obsession. He had to get the classic belts and the one-of-a-kinds. It got to a point that he was making a name for himself in the championship belt business.

“I found myself meeting fellow belt enthusiasts online. I started buying some of my favorite belts from when I was a kid and got into collecting classic championship belts. As I started to get more into the hobby and started to upgrade my belt collection I met more and more people. I had a few one-of-a-kind belts and it led me to meet some of the top collectors in the hobby. They reached out to me and people started buying my belts and asking me to find certain belts for them for their collection.”

Taijeron’s progression reached a level of trading before a belt maker made contact. They became business partners and as they say, the rest is history.

“It’s always been something I wanted to do. I then linked up with a well-known belt designer in the UK. We worked on a design together, and that is when I started to see that I can do this and add my own style and make my own impact in the belt industry. Now I’ve designed numerous belts for people all over the world!”

Taijeron is now a member of a belt-making company in charge of the Asia Pacific region. He’s already done some amazing work on local events such as cooking contests, karaoke contests, fantasy football leagues, jiu jitsu tournaments and fighting events.

You can reach out to Big Mike on Instagram @bigmikechampionshipbelts and see for yourself what he’s done and what he can do for you.

“I’m starting off here at home and working hard to become the go-to company for championship belts on this side of the world.”

“I wanted to thank God for this blessing, my familia and friends. My right hand Ernest Rios for running my social media, my left hand De-Anna Taijeron, G Tajalle for the long talks about growing the business, Travis Meno, Justin Castro, and the FUGG IT UP FANTASY FOOTBALL LEAGUE FOR MY FIRST LOCAL CUSTOM BELT. Jovin Santos, Linda’s Diner, Street Credit Clothing for the opportunity to create numerous belts for their events. Melchor Manibusan and Champ Chows, Brawl, Submit Team. Tim Nauta , Kyle Aguon, The NVRGIVUP team for displaying my belts at their shop. Patgon Jiu Jitsu tournament for believing in us. Kin Cook and my Bank of Guam familia, and of course GSPN. Thank you all for your continued love and support. Saina Masse Para Todus Hamyu!”

Footnote: Big Mike is a 2000 graduate of JFK where is was and still is good friends with former Guam wrestler and current pro wrestler Jeff Cobb.