The FD Friars celebrated senior night Tuesday while also blowing past the St. John’s Knights, who were without starting guard Michael Min for majority of the contest. 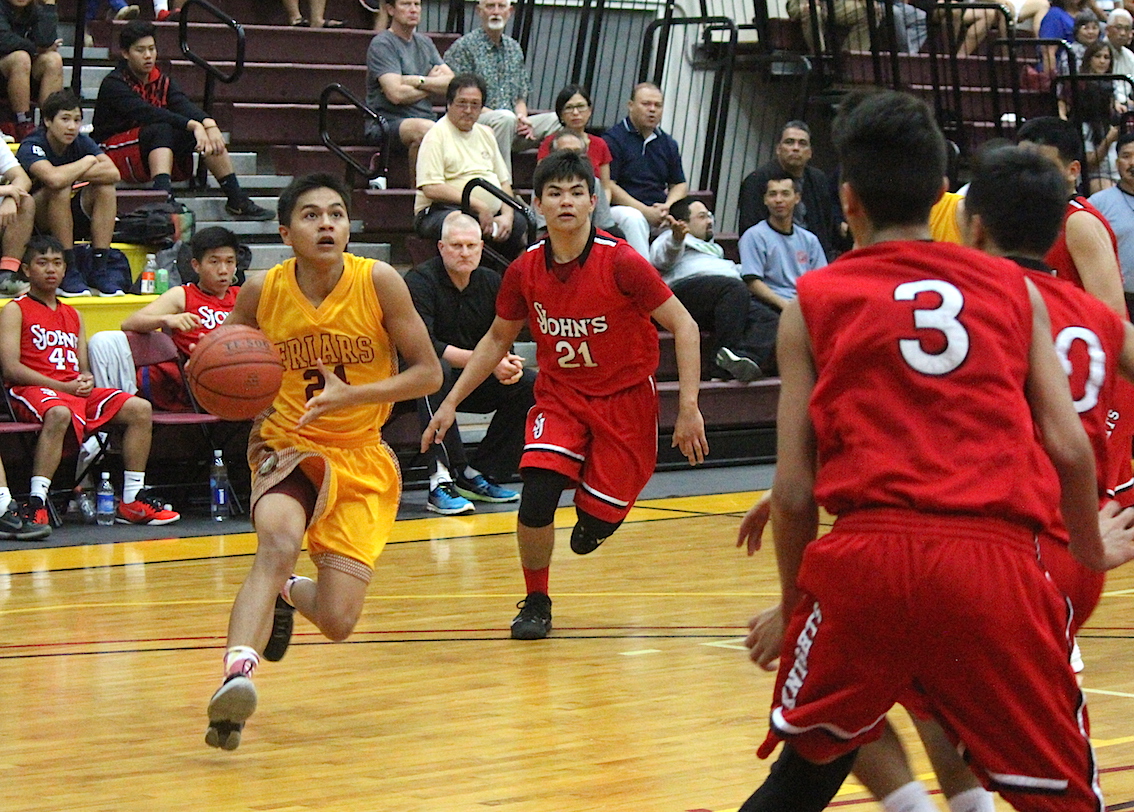 It was senior night at the FD Phoenix Center and the Friar seniors did not disappoint their family and friends getting the big win over the St. John’s Knights 69-36. FD had nine seniors and all shared playing time in the first half as the Friars shut down the Knights early.

Friar coach Eddie Pelkey started five seniors on Tuesday for the game against the Knights. The seniors wasted no time with Friar guards Devin Sudo, Roy Taimanglo and Josh Paulino all scoring en route to a 10-2 lead.

The Friars kept going to take a 16-3 lead with seniors David Sakazaki and RJ Rokop coming off the bench to contribute. The Friars forced 8 first quarter turnovers to go up early.

Jeno Aquino provided much of the offense in the 2nd quarter as FD built their lead to 36-15. Aquino scored 10 points in the 2nd quarter, having his way in the paint with Knights forwards Ricky Brown and Isaac Sim in foul trouble.

Sudo and Taimanglo, both All-Island football players, forced the Knight guards to make bad decisions. Both players recorded four steals each in the first half. The Knights had trouble breaking the Friar press with starting point guard Michael Min limited in minutes with a wrist injury. Min played at the tail-end of the 1st quarter, but didn’t see action from then on.

Takumi ‘Curry’ Simon was heavily guarded, putting up only four shot attempts for 5 points in the first half. Simon played briefly in the second half before coach Fred Peters decided to pull all his starters after the Friars built a 20-point lead. Min played just 6 minutes with his left wrist wrapped, he could only dribble and shoot with his right hand.

The Friar victory came just in time after surrendering two losses last week to the JFK Islanders and the Sanchez Sharks. “It was a big win because it stops our losing streak. It was a special night because this is one of our last home games and to come up with a big win makes it more special,” said Aquino.

Aquino had a game high 18 points in just 14 minutes on the floor. Cole Merfalen scored nine points, Paulino had four points and six assists. There were 13 different Friars who scored in the game. Sakazaki had four points and a game-high nine rebounds.

Tony Hsieh had the hot hand for the Knights scoring 12 points, Junmao Wang chipped in 10 points. The Knights committed 27 turnovers, the Friars had only eight for the game. The Knights will have three days to recover with their next game at Tiyan, the Friars will play at St Paul on Friday.