GECKOS GET CLUTCH WIN OVER PANTHERS

The GW Geckos avoided going 0-2 to start the IIAAG Boys High School Basketball season and held off the Guam High Panthers 70-64 to get their first win of the young season. 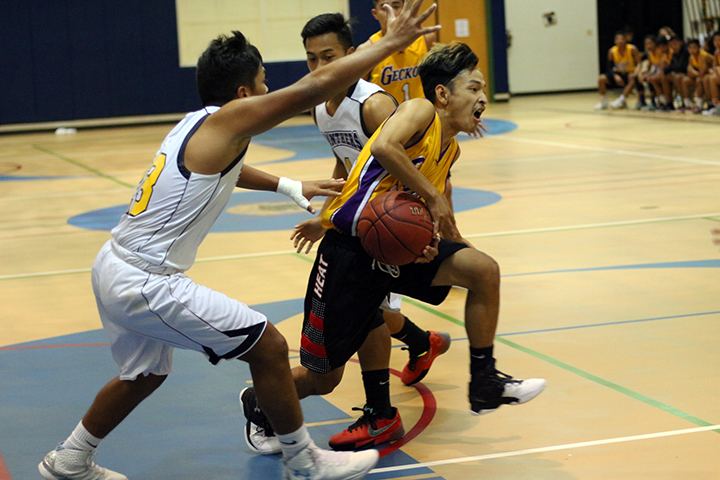 The GW Geckos avoided going 0-2 to start the IIAAG Boys High School Basketball season and held off the Guam High Panthers 70-64 to get their first win of the young season. The Geckos lead by as much as 10 points in the final period but the Panthers clawed their way back into the game and tied the contest 62-62 with 1:46 left in regulation.

With momentum NOT on their side and the Panther home fans cheering loudly, it seemed the Geckos were doomed to go 0-2 after winning the GSPN preseason tournament. The Geckos had their backs against the ropes, but in the end, they passed the test and silenced the Panther crowd with good execution down the stretch to escape with the victory.

“Of course there was some fear, but that same fear drove us in the heat of the moment,” said senior guard Noah Blas. Blas and Geckos dropped their season opener to the ND Royals and were in grave danger of starting the season at 0-2 against a Panther squad filled with good talent and great coaches.

Sophomore sensation Kyle Gaitan played like veteran in the final moments of the game, scoring 4 points in the final minute to help the Geckos secure the win. Gaitan had a double-double at halftime and finished with 27 points and 16 rebounds to lead the Geckos. Blas had a complete stat line with 9 points, 8 rebounds and 4 assists.

“We knew it was going to be tough. Coach (Lawrence Luces) did a good job of getting us to regroup and into a positive mindset going into the final minutes of the game,” said Gaitan. “We still have a lot to learn,” he added.

Rodney Taitague Jr. led the Panthers with 26 points, 3 steals and 3 assists. Taitague played the entire game and controlled the offense for the Panthers but his final shots at the end of the game were short as he was closely guarded by Blas.

“I try not to give him any space, but he still knocks down those shots. Their entire team is not to be taken lightly; the King brothers (Juan Jr. and Jujuan) are awesome and their big man (Robert Kranz) is really good at rebounding,” said Blas.

Wendy’s Players of the Game, Fabrick Ramos and Kyle Gaitan of the GW Geckos. (photo by Daniel Paran)

It was a back-and-forth battle in the first quarter, the Panthers had a slight 10-6 advantage with all five starters scoring to start the contest. The Geckos pushed the pace to take their first lead in the second quarter with Gaitan scoring from offensive rebounds. Gaitan continued to push the pace, getting a double-double by halftime with 14 points and 11 rebounds.

The Geckos looked to expand their lead but Taitague got hot before halftime, sinking a pair of 3-pointers to trail 35-34 at the break. Taitague made 3-of-4 of his shots from downtown and netted 15 points by the break.

Karlo Deleon and Gaitan pushed the pace in the 3rd quarter as the Geckos led 42-35. The Geckos looked to run away in the third and fourth periods, but the Panthers never let the game away from them.

The Panthers responded after coach Joe Taitano called a timeout. Blaise Taitano had two assists late in the third period to answer the Gecko buckets. His first assist was to Taitague for a 3-pointer and the second was a dish to Kranz to cut the lead to 42-20.

The Geckos went on another run in the 4th quarter. Jacob Frias hit a long 3-pointer, Fabrick Ramos weaved his way in the paint for a score and Blas scored a transition bucket go up 60-50.

With four minutes left, the Panthers started yet another comeback. DJ Wiliams converts from an inbound play and Taitague hit his sixth 3-pointer of the game to start the rally.

The Geckos played the stall game, but their plan backfired with a pair of turnovers. Kranz scored an easy basket off a missed fast break lay-in and Jujuan King got a steal and dished an assist to Williams to get within a point to trail 62-61.

The Geckos got the ball back and Gaitan missed on the ensuing possession. Jujuan King rebounded the ball and was fouled, making 1-of-2 free throws to tie the game at 62-62.

Rodney Taitague is left wide open as he sinks a three for the Panthers. (photo by Daniel Paran)

Gecko coach Luces called a timeout (1:46 left) and drew up a beautiful inbound play with Devin San Agustin as the recipient for an easy basket to go up 64-62. The Panthers get two looks on offense, but come up short as GW rebounded.

The Geckos got the ball to Gaitan who made a go-ahead bucket to go up 66-62. The Panthers got looks at 3-pointers with 30 seconds left, but none of them fall. King was there to collect the offensive rebounds and found Taitague open, but he is fouled by Ramos and makes 2-of-3 from the charity stripe to cut the lead to 66-64.

The Panthers are forced to foul Gaitan and he calmly sank two big free throws to go up 68-64. The Panthers went for the 3-pointer with less than 10 seconds remaining but missed on both attempts. GW rebounded and Blas scored the final basket to secure the 70-64 victory.

The Geckos were riding a high note going into the season after winning the Buddy’s Home Furnishings preseason tournament but were humbled by the ND Royals in the season opener.

“A lot of punishment after the loss. We did some conditioning and there was adjustments we made,” said Gaitan. The Geckos are now 1-1 in the division, the loss also drops the Panthers to 1-1 for the season.

The Panthers had an easier time with the Geckos in the junior varsity game winning 63-17. Cross country speedster Isaac Ventura led the Panthers with 24 points, teammate Francis Tagalog scored 17. The Panthers improve to 2-0 for the season.

DJ Williams keeps out Geckos’ Noah Blas as he makes his way down the court. (photo by Daniel Paran)

Panthers’ Jujuan King reaches back to take the rebound. (photo by Daniel Paran)

Fabrick Ramos slows things down to set up a play with the Geckos. (photo by Daniel Paran)

Nathaniel Gaitan of the Geckos attempts a layup through heavy Panther defense. (photo by Daniel Paran)

Nathaniel Gaitan of the Geckos attempts a layup through heavy Panther defense. (photo by Daniel Paran)