The JFK Islanders defeated the FD Friars in the rematch of last years boys basketball championship game at the Phoenix Center Tuesday night in a low scoring affair. 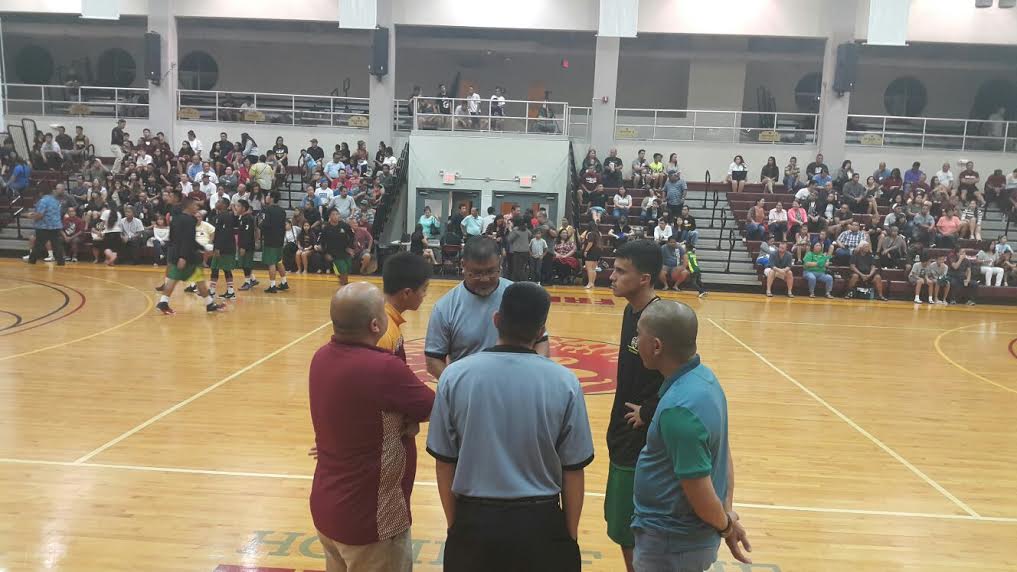 (Due to technical issues, photos from the game are not currently available)

By Jay Leon Guerrero with contributions from Dre Thompson

To be the champion, you’ve go to beat the champion. The IIAAG boys basketball defending champion JFK Islanders held their ground at the FD Phoenix Center and defeated the Friars 32-30 in a defensive chess match.

JFK’s Billy Belger and Chris Conner were both held to single digit points, but the Islanders were still able to come away with the win in the defensive battle.

The Friars were riding a 6-game winning streak coming into the contest, looking to top the defending champions on their own home court. The Friars rotated different big guys to match up against Conner but he got the best of the Friars on defense with a game high 6 blocks.

Belger controlled the tempo of the game and made two 3-pointers in the third period to help the Islanders stay in the contest as they trailed 27-23. The Friars were unable to maintain their lead and managed to score just three points in the final period.

It was a seesaw battle and the contest was tied at 30-30 with three minutes remaining. Conner found teammate Nolan Chamberlain on a back door cut to put the Islanders up 32-30. Chamberlain’s basket was the last time either team would score.

FD missed on their field goal attempts and JFK decided to run the clock down and hold the ball. The Friars were forced to foul and got the rebound after a missed JFK free throw with 30 seconds remaining. The clocked ticked down to seven seconds when FD’s Roy Taimanglo made his move to the basket.

Taimanglo’s shot was high off the glass and just missed. FD center David Sakazaki went in for the rebound, but was unable to pull in the offensive board with Chamberlain scrambling out of the pile with the rebound.

“In that last sequence we were looking to play hard defense and grab that rebound,” said Conner. This is the only meeting between the two teams in the regular season. Should both teams cross paths again, it will be late in the playoffs. “If we meet again, we need to bring more energy and do a better job at making our shots,” said Belger.

JFK passed the ball downcourt and Anthony Smalls made a lay-in but the basket didn’t count as the buzzer sounded for a final score of 32-30.

“I knew this game was going to be a defensive battle. It came down to who had the last possession of the game,” said JFK coach Rey Serafico.

Chamberlain had 6 points and his last bucket with three minutes left was the difference and the game winner. Belger had 8 points and 9 rebounds. Conner had just 5 points, but he contributed 10 rebounds and 6 blocks.

Isaiah Sablan was the leading scorer for FD with 13 points and Taimanglo had 6 points for the Friars who drop to 6-1. The Friars are still the top team in the Gadao division with a two game lead over the Guam High Panthers. Guam High improved to 4-3 after defeating the Okkodo Bulldogs on the same evening by a point.

The Islanders are still tied with the St. John’s Knights in the Taga division with identical 6-1 records. The Knights defeated the ND Royals 76-59.

The John F. Kennedy Islander JV team defeated the Father Duenas Friars 75-58 to open up the evening. Tuesday night’s game was a battle between the leagues two undefeated teams.